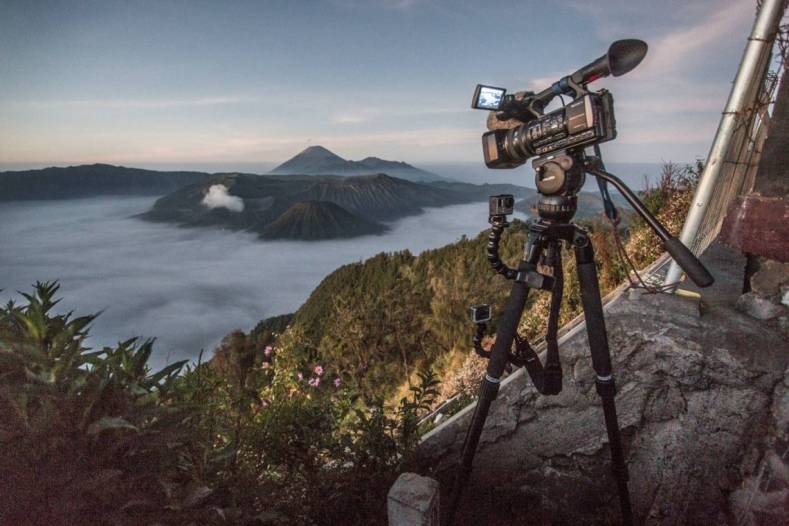 It’s not every day that one descends deep down into the crater of one of the world’s most active volcanoes to attain captivating shots for documentaries, but it’s certainly not a day out of the ordinary for Bradley Ambrose. Ambrose is an adventure photographer and video journalist, who works alongside filmmaker Geoff Mackley. As volcano enthusiasts, Ambrose and Mackley have together faced the fiery furies of some of the world’s most dangerous pools of molten lava and spewing ash clouds to capture dynamic stills and videos of nature’s vehement side.

Most recently, we travelled to Ambrym, a volcanic island in the Malampa Province of Vanuatu. After taking a boat to a small, remote village located just on the outskirts of the volcano, Mackley and I trekked 12 kilometres, by foot, to reach the Ambrym volcano. After setting up a summit camp, we quickly began rigging ropes to rappel ourselves down inside the volcano’s Marum crater.

The crater’s rim sits approximately 400 meters above the most active lava lake in the world, making shooting inside the volcano a mission in itself. In order to successfully complete this task, we needed robust, sturdy, lightweight equipment that would not hinder our movement. We choose Miller Camera Support Equipment’s Air Carbon Fibre System for our tripod technology.

Inside the crater, there are large sections of vertical walls, all with varying slopes. With the Air strapped underneath me, I was able to successfully abseil halfway down the crater to shoot stills and videos. Other, larger and heavier broadcast equipment would have made that trek almost impossible. Over the course of one week, Mackley and I worked as a two-man crew, documenting every spurt of ash, lava and steam that we encountered. 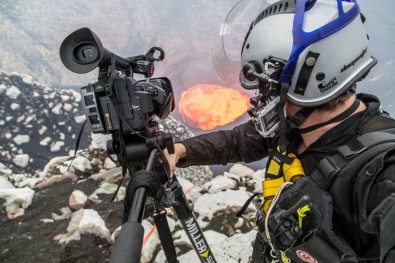 Just another day for Bradley Ambrose, shown here shooting on the rim of the Ambrym volcano with his Miller Air Tripod.

Accompanying us through our many volcanic voyages was my 11-year-old daughter, who is eager to learn about the type of work that we do. One night, we were dangerously close to the Dukono volcano in Indonesia as it erupted. We had been busy filming for a story recently released on ABC Nightline in the United States. I stayed away, as I felt it was too dangerous for my daughter to be that close to an eruption. However, Mackley remained on the summit and was caught in the midst of it all, shooting with the Air. The next day, the tripod system was completely covered in ash, from the fluid head to the legs, but it was still in perfect working condition. The fluid movement was still smooth, and the legs contracted and expanded with ease. Not many tripods could survive such harsh conditions and still function properly the next day.

While in Ethiopia, the temperatures soared to more than 53 degrees Celsius. That alone would be sufficient for one to keep his kit lightweight. But in addition, we were filming during a month in which foreigners are generally not allowed access to the Erta Ale volcano, as the temperatures can, and do, kill people not used to the environment.

Throughout our different shoots around the world, Mackley and I choose to work with lighter cameras, including a Sony NXCAM, Sony 4K Handycam and Canon EOS 5D Mark III DSLR. Supporting them with the Miller Air helps keep the total weight of our equipment to a minimum, without compromising our creative integrity.

A tripod system is, in my mind, the most important tool when shooting in the field. Each Miller tripod has its own personality, and the Air Tripod System is perfect for what we do. We travel to exotic locations with minimal equipment but still need to get the shots that larger productions seek and crave. Miller makes this happen for us.

Since the start of our quest, traveling through the likes of Australia, China, Ethiopia, Rwanda and Siberia, to name a few, our, what some would call harrowing, journey has drawn worldwide attention. Most recently, our story has been featured on ABC Nightline in the United States and on the BBC in a documentary entitled “Journey to Fire Mountain,”.

We have also been filmed in an advert for the release of the world’s first UHD-capable cell phone and we are also shown in the latest GoPro Hero4 video that records us climbing into the Marum crater. In the upcoming months, our own programme we fronted is slated to air on a well-known travel and adventure network, so stay tuned!