Wisycom used IBC 2017 to showcase many of its latest wireless microphone products. The new Programmable RF Combiner and wideband antennas are aimed at both broadcasters and live production engineers, with the intention of extending coverage more efficiently and at a lower cost.

The MAT244 RF Combiner is derived from Wisycom's bigger-scale MAT288 unit and is able to merge four individual RF sources as they come into the unit using a matrix based on solid state switching. Running on a bandwidth stretching from 150MHz to 840MHZ, the MAT244 can be remote controlled over Ethernet for greater operational flexibility. "The new MAT244 matrix combiner gives users our RF distribution technology in a condensed package, suitable for any type of broadcasts or productions," comments Massimo Polo, sales and marketing director at Wisycom. 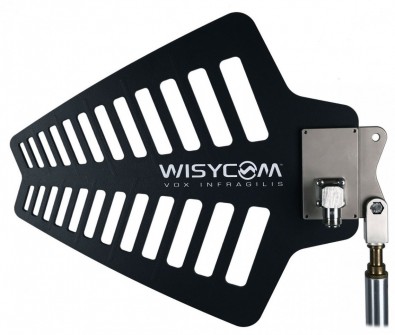 The two new antennas are the LBN2/LNN2 Ultra High Frequency (UHF) wideband devices and the LBP/LNP units with signal booster amplification. The LBN2/LNN2 is based on a Log Periodic Dipole Array (LPDA) multi-element, directional design, operating in the 420-1300MHz frequency range. The antenna has a gain in the region of 6dBi and a beam width of 140-degrees to optimise reception. It comes in two versions featuring different connectors: one with a BNC connector (LBN2) and the other with an N connector (LNN2).

The LBP/LNP has the same choice of connectors but the main selling point of this antenna is its amplifier. The amp receives power via a coaxial cable to its input and boosts RF by approximately 20dB to increase coverage area. The amp is contained in a robust aluminium housing featuring a waterproof seal, so it can be used outdoors. The LBP/LNP is designed for the 435-800MHz range with 6dBi of gain and a beam width of 90-degrees.

The two antennas are constructed from epoxy fibreglass coast with copper covered in a black matte finish. "We are always trying to increase our product offerings with the needs of our current and future customers," says Polo. "The two new antennas provide a stronger RF reach on any size project."