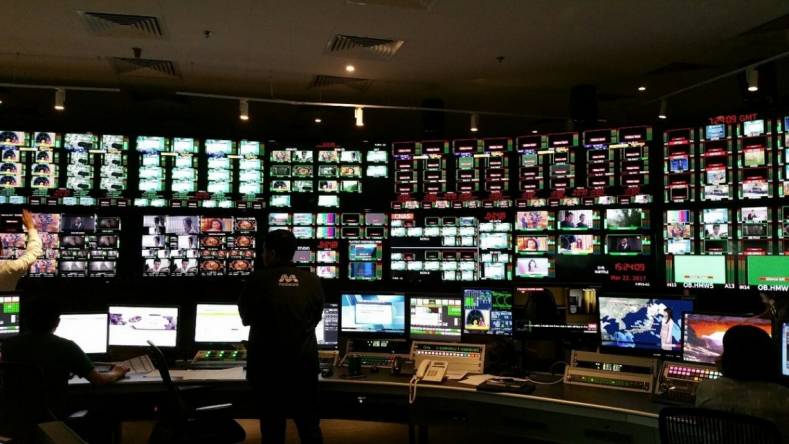 Singapore media conglomerate Mediacorp recently reached the end of its move to a new facilities campus. The broadcast company is now operating from television and radio studios in a purpose-built production centre at the Mediapolis technology development in the one-north district, featuring newly installed Lawo consoles and routers alongside Octopus newsroom systems, EVS playout servers and Vizrt studio automation.

Mediacorp is a commercial broadcasting group, operating seven TV channels and 12 radio stations. It is owned by Temasek Holdings, an investment organisation run by the Singapore government. Originally a radio broadcaster when the company was established in 1937, Mediacorp branched into TV in 1963, with studios for both operations based at Caldecott Hill in the centre of Singapore.

Mediapolis has been developed as an "infocomm technology and media (ICM) ecosystem" by state-owned real-estate company JTC. It is part of the one-north business park and town-within-a-town, which itself is located in the Queenstown satellite area of Singapore. Mediacorp began the move from Caldecott Hill to Mediapolis in 2015 and has now begun broadcasting from its new studio facilities.

The Mediapolis centre is arranged into four operational divisions: Central, Radio, TV and News. Central is made up of three specific areas: CMX (Ingest), DC (Distribution/Contribution) and Playout. Sources from outside broadcast trucks or downlink sites coming into Distribution/Contribution are converted into virtual feeds using Lawo's VSM Virtual Package Workflow technology, with all signals available over the entire facility. The system has a fail-safe feature that means the virtual signal will not be affected if a device elsewhere in the chain drops out. This allows the faulty unit to be switched or replaced without disrupting the signal flow.

Another specific feature of VSM being exploited by Mediacorp is Boxing. This enables programmes to be moved from one studio to another, either because of equipment or technical problems in one facility or to prepare a production in an area and then control it from elsewhere. This flexibility and redundancy is also being used for the radio operation, working in conjunction with two Lawo Nova73 routers running in parallel. VSM is used to control and monitor the 12 radio stations, which have two back-ups, as well as synchronising the routers and providing silence detection and alarm facilities.

Signals from the studio consoles are passed to a Nova73 HD router in the central apparatus room. Each desk has access to 256 tieline channels, with the Nova routing all studio I/Os and controlling signal distribution. This includes 128 AES I/Os and 16 MADI and 16 REVANNA ports. The Nova73 HD is further connected to Mediacorp's three TV news studios. Studio 1 features a 48-fader mc²56 with 16 line outputs, eight AES I/Os and eight GPIOs, plus a DALLIS (Digital And Line Level Interface System) and Nova73 compact I/Os. Also connected are four A_mic 8 audio to IP interfaces, based on RAVENNA for shared audio.

Studios 2 and 3 both feature 32-fader mc²56 boards with the same I/O and interfacing configurations as Studio 1, although Studio 3 houses two DALLIS units. For shorter video pieces there is a FlashCam studio, which is served by a 16-fader mc²36 console featuring 32 mic/lines, 32 line outputs, eight AES I/Os, eight GPIOs and headphone monitoring. The FlashCam area is based on RAVENNA AoIP distribution, while the news studios run on MADI connectivity. There are also four FlashCam areas in the newsroom, allowing journalists to record video and audio without having to go into the main studios. Each is assigned to one of the main languages used in Singapore (Tamil, Malay, Chinese and English) and features an A_mic8 running up to eight mics and four returns.

Also on the Mediapolis campus is Audio Post, the music and audio recording subsidiary of Mediacorp. During May this opened the first Auro3D and Auromax spatial surround sound studio in Southeast Asia. The Movie Mixing Studio (MMS) is able to handle '3D' audio formats - both channel-based Auro 11.1 and channel/object-based AuroMax 26.1 - plus 5.1 and 71. MMS also features a Barco Cinema projector, 43 Quested monitor loudspeakers and a Fairlight EVO digital audio workstation.