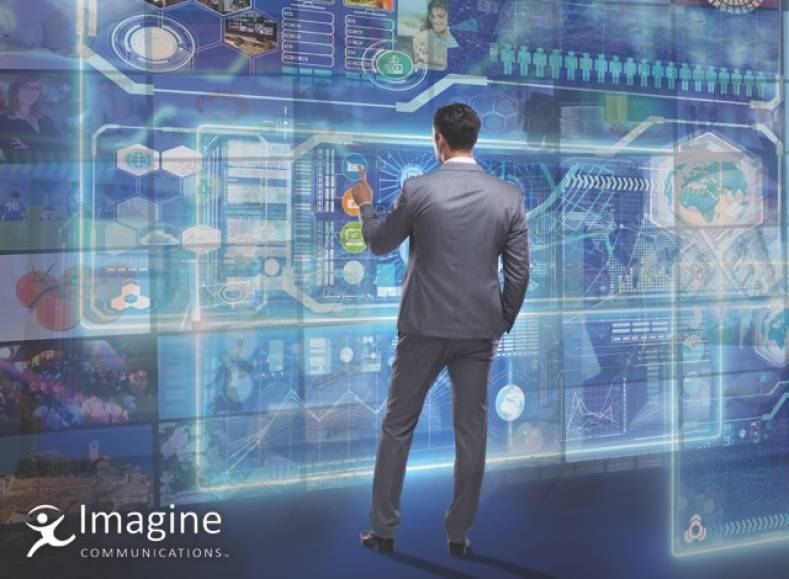 The gateway to IP may bring a whole new industry paradigm.

Imagine Communications is pushing for uncompressed IP as an open source technology.

The move toward IP is as much a crusade as a technology transition for Brick Eksten, chief product officer at Imagine Communications and his team of engineers. He sees it as a way to restructure our entire content creation industry.

“We were a founding member of AIMS (Alliance for IP Media Solutions) and believe in IP technology based on COTS (commercial off-the-shelf) equipment,” he began during a one-on-one interview with The Broadcast Bridge. “This is about much more than just moving bits and bytes. It’s about moving the economy of broadcast away from a proprietary, vendor-specific market to open standards that are accessible by all.”

As a first step, Imagine is tackling the challenge of getting from an SDI world to IP, and including uncompressed UHD in the process, by creating the Selenio Network Processor (SNP).

It’s an all IP-capable processing system optimized for handling uncompressed UHD signals that will eventually be based on the SMPTE 2110 specification for transporting media over IP networks.

The idea for SNP was inspired by Swiss broadcast service provider tpc (technology and production center Switzerland ag) when they wanted to build the industry’s first remote truck that supported uncompressed HD and UHD signals over IP.

“SNP is a hybrid in many ways, “Eksten explained. “Not only does it bridge the SDI and IP worlds, it also bridges the technology gap. Part of the SNP is a standard CPU processor running a traditional software stack, so what we’ve done is take a basic appliance and overlaid it with a software management and control system.”

That way, for facilities’ management overseeing the SDI to IP transition, it just looks like another software control running on a network with all the typical attributes of a baseband processor and gateway.

The Selenio Network Processor based on the AIMS IP protocol now, ready for SMPTE 2110 when it is ratified.

But there is a lot running under the hood. The SNP has 32 HD ports operating simultaneously, each of which being able to run 3 Gigabit baseband SDI. That means you could combine 4 of those 3 Gig channels to convey an uncompressed 12 Gig UHD signal.

Think of it as similar to a quad HD process where 4 HD signals are matrixed into a form of 4K.

The SNP combines the IP throughput of 4 IP channels to output an uncompressed 12 Gig UHD IP signal giving the system a total capacity of 32 HD or 8 UHD channels.

Currently, SNP is running on the AIMS roadmap for uncompressed IP until SMPTE ST 2110 is finally ratified sometime this summer.

“There were over two dozen divergent IP technologies competing in the industry, which was good for no one,” Eksten said. “But the AIMS consortium now has over 70 members, and they are all committed to using this open standard for uncompressed UHD over IP until SMPTE ST 2110 is ratified. That will give the media and entertainment community a fighting chance move to an open standard over COTS as we transition to IP.”

And to support this crusade’s momentum, Eksten makes the following promise: “As the process moves along, we are going to be sharing the source code to the bulk of our technologies with our customers to insure complete transparency as we advance to the next generation of IP infrastructure.”