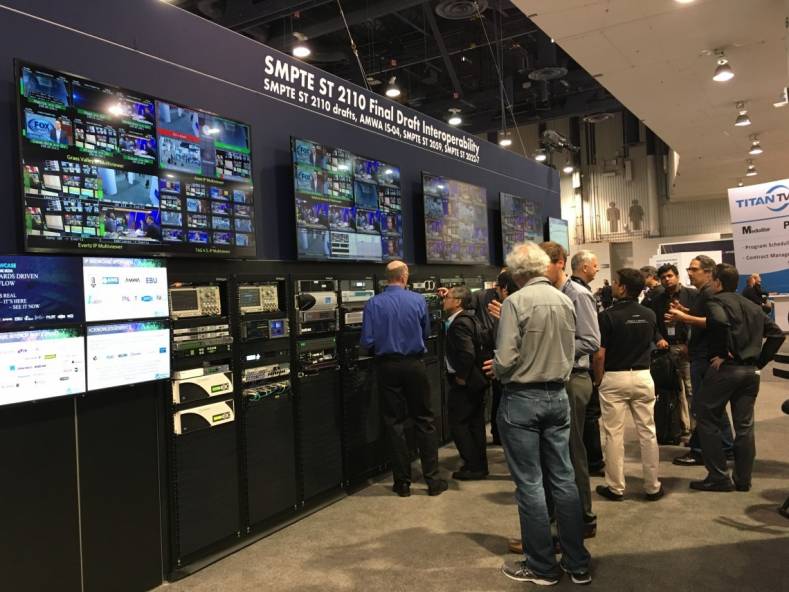 Evertz and Panasonic demonstrated uncompressed IP video transport at the IP Pavilion during the 2017 NAB Show.

Evertz and Panasonic are validating that SMPTE ST 2110 is the smoothest path to uncompressed IP interconnectivity.

As part of its continuing initiative to help the media industry transition to IP based facilities, Evertz Microsystems and Panasonic, have been working together to demonstrate the IP interoperability of the upcoming SMPTE ST 2110 standard.

“This is all part of our campaign to support a set of standards for transporting video, audio and metadata over IP including AMWA (Advance Media Workflow Association) IS-04 for registration and discovery of network devices,” Mo Goyal, sr director of business development at Evertz Microsystems, told The Broadcast Bridge in an exclusive interview.

As an early member of the ASPEN (Adaptive Sample Picture Encapsulation) Community, Evertz has long been a supporter of uncompressed video over IP distribution which facilitates the transition to 2110.

“The goal of this announcement is to show that any Panasonic product that is going to be designed to support SMPTE ST 2110 will interface with any Evertz 2110-based IP product,” Goyal told us. “This includes our media gateway modules, our IP multi-viewers, our replay servers, and our compression products with more to come.”

ASPEN protocol SMPTE RDD 37 was released at NAB Show 2015, and promoted by the newly-founded ASPEN Community at IBC 2015. ASPEN offers a robust format for encapsulating uncompressed Ultra HD/3G/HD/SD over MPEG-2 Transport Streams that can be carried via IP.

Although SMPTE ST 2110 is not fully ratified yet, as an industry leader in the transition from SDI to IP, Evertz has over 40 global installs of its Software Defined Video Networking (SDVN) IP system based on ASPEN.

ASPEN protocol takes the uncompressed video, maps it to an MPEG-2 Transport Stream and then maps that to IP.

SMPTE ST 2110 takes that video payload and maps it directly to IP without the intermediary Transport Stream. 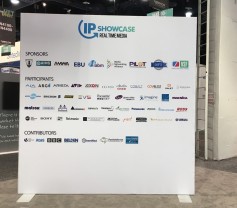 The IP Pavilion demonstrated interoperability of four parts of the new SMPTE ST 2110 standard between dozens of companies (click to enlarge).

From Evertz perspective, the difference will be a simple firmware upgrade.

“A large majority of the manufacturers have committed to 2110,” Goyal told us, “along with its suite of standards for professional media over IP networks.”

All of this was demonstrated at the IP Showcase in the North Hall of NAB Show 2017.

Goyal revealed that several other manufacturers such as Ross, Sony, Vizrt and Matrox have previously committed to SMPTE ST 2110.

To carry an uncompressed 4K/60P signal over IP requires 12 Gigabits, or multiple 10 Gigabit Ethernet circuits, which is only now becoming common place in production facilities.

As regular readers of The Broadcast Bridge know, we have often reported on NewTek’s NDI (Network Device Interface) that can push compressed IP interconnectivity over a single Gigabit Ethernet line.

But Goyal tells us interfacing this 1 Gig net with a 10 Gig ecosystem can be fairly simple with a gateway bridge.

Goyal is convinced that the whole industry working toward a single IP standard will help make the transition to IP sooner rather than later.