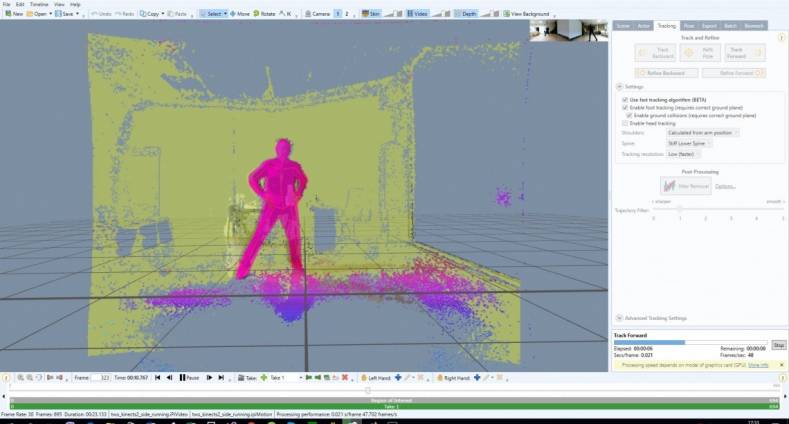 If you use a high end video card, iPi Motion Capture software vers. 3.5 can now track at speeds up to 60-70 fps, offers faster calibration for the Sony PS3 Eye camera and is applicable for single actor projects and single GPU configurations.

The Basic edition supports up to 6 Sony PS3 Eye cameras or 2 Kinect sensors, while the Pro version features full 16 camera/4 Kinect sensors capability and can track up to 3 actors.

But it is that amazing leap forward in rendering speed that I wanted to discuss with Michael Nikonov, founder and chief technology architect for iPi Soft, and he was good enough to reply to The Broadcast Bridge direct from Moscow. 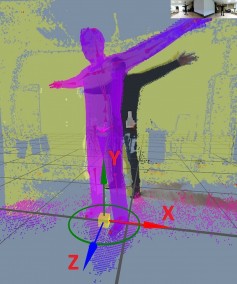 We started with the use of the Kinect sensor technology.

“The Kinect sensor provides 3D data, meaning 2D position + depth,” he replied. “Using this data, the algorithm effectively subtracts background from the actor thus decreasing the number of points in the point cloud.

One of the most advanced features in this 3.5 release is the ability to select flashlight color used for marker detection during calibration. This can be invaluable in scenes with light backgrounds since the usual flashlight color is bright yellow or even white which is difficult to distinguish in high luminosity environments.

”The flashlight marker is a tool that is used during the calibration process.” Nikonov explained.

“The position of the marker, the ‘flashlight’, is detected in every camera and is then used to calculate mutual orientation and camera positions. With V3.5, we now support different flashlight colors. Users of the Sony PS Move controller, which offers white, red, blue and green colors, can use it as a flashlight as well. During calibration, users can change the default white flashlight to any color.”

But perhaps the most intriguing announcement accompanying the release of iPi MoCap vers. 3.5 is the company’s goal of reaching true real time tracking by the end of this year.

Nikonov described the workflow for us.

“We are currently able to provide users with tracking capability during the recording – the algorithm processes the current frame before the next frame's data arrives. We are now working on software that will pack and send recorded data from iPi Recorder, which records motion, to iPi Studio, used to track the motion and transfer it to a 3D character.

“Our goal is to have iPi Studio software provide tracking and motion transfer so the user can see the motion on a 3D character at the same time as the motion is performed. This type of feature is currently available in expensive MoCap systems (most of them are marker-based). Now that our tracking algorithm frame rate data has improved, we will continue development efforts to deliver real-time capability to our customers. I see the end of the year as a realistic target.”