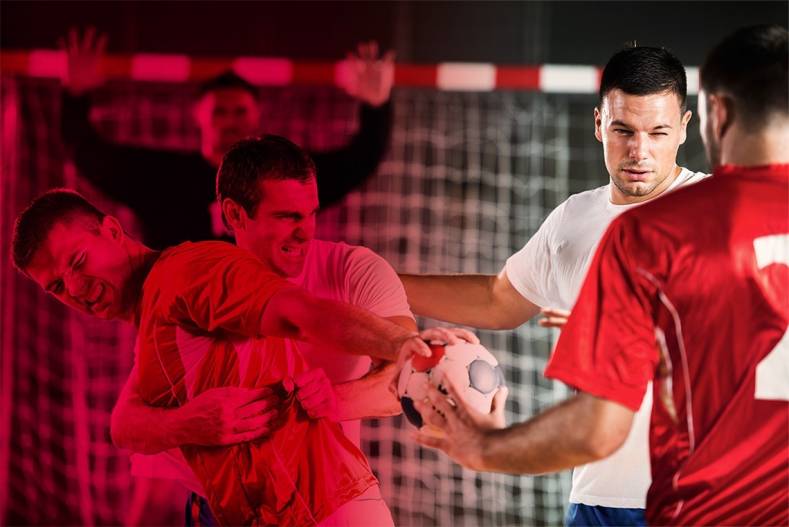 Handball is a very popular sport in Denmark. TV2 looked for a cost-effective way to increase coverage.

TV 2 Denmark wanted to expand its coverage of the nation’s hugely popular live handball matches at the same time reducing the overall cost of the production. Since live event production is resource intensive, to effectively increase its output, the broadcaster sought a solution that would address and eliminate bottlenecks in its live production workflows. In early 2015, the broadcaster launched a new dedicated sports channel, TV 2/Sport, after implementing a solution enabling parallel productions at multiple different arenas across the country – and reducing production costs.

High quality sports content holds the key to a loyal audience, but live production is resource intensive, and traditional OB production limits the amount of live content a broadcaster can bring to its audience. This pressure is exacerbated by the fierce competition faced by traditional broadcasters from new media players as over-the-top distribution can provide a more cost-efficient alternative to dedicated distribution platforms.

The task facing TV 2 Denmark was a desire to expand its coverage of the nation’s hugely popular live handball matches to meet the rise in demand while at the same time reducing the overall cost of the production. Since live event production is resource intensive, to effectively increase its output, the broadcaster sought a solution that would address and eliminate bottlenecks in its live production workflows.

In early 2015, the broadcaster launched a new dedicated sports channel, TV 2/Sport, after realising a solution that would enable parallel productions at multiple different arenas across the country – at the same time as reducing production costs.

The most obvious way to streamline the cost of live event production is to reduce the burden of its most expensive resource: the facilities required to capture, process and produce at a venue and the engineers needed to set-up, operate and manage it.

If live broadcasts can be done at a distance from the actual event, by sending raw camera feeds, audio, and equipment control over a telecoms infrastructure to a central studio facility, then OPEX and CAPEX savings will increase.

TV 2 Denmark seized on this opportunity to greenlight the launch of TV 2/Sport. In particular it turned to Net Insight’s Nimbra as the solution to its live remote production infrastructure.

Designed for high-quality media transport over IP, Nimbra is the next-generation solution for live sports production solution. It is a multi-service media transport platform supporting both native video and audio in addition to standard IP/Ethernet. Built-in video processing, low-latency JPEG2000 encoding as well as unique features for equipment control and synchronization makes Nimbra the perfect choice for remote production.

TV 2 Denmark wanted a plug and play set-up that they could easily transport to any venue. This fly-away system, deployed in partnership with Net Insight partner Borch Teknik, packs all the equipment into a single flight case and replaces the need for a dedicated OB van.

Five HD video feeds with JPEG2000 compression are sent from the sports arena back to TV 2 Denmark’s central production hub at its headquarters in Odense. Along with the video, 28 embedded audio channels, as well as, several VLANs to cover all necessary data for intercom, tally and TV 2 office intranet are carried over a 1Gb/s connection to the HQ with two SD uncompressed video feeds routed from the HQ in return. 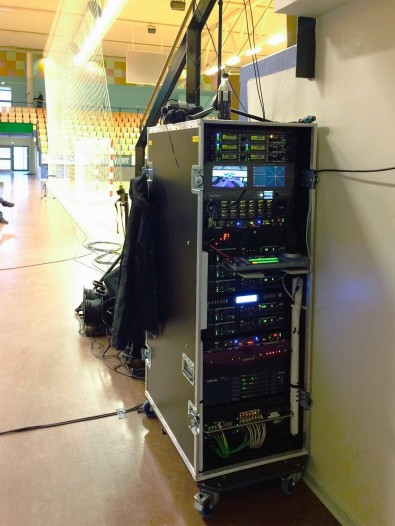 The Nimbra fly pack avoids the need for an OB van for handball coverage.

A Net Insight Nimbra 640 encoder on-site provides all the video, audio and data connections to TV 2 Denmark’s hub where the signals are decoded by a companion Nimbra device. The extreme low-latency of 240 to 260 ms affords smooth slow motion, audio mixing, graphics and editorial production and precise CCU camera control over many kilometres from the venue. Since TV 2 Denmark’s HQ is outfitted with a 3 Gb/s connection, up to three productions can be produced in parallel at one time.

The Nimbra solution further extends TV 2 Denmark’s production workflow to reach multiple remote venues. A set of identical systems has enabled the broadcaster to conduct parallel productions at 18 different arenas across the country.

This means that the scarce and highly specialized production staff is used centrally, possibly covering multiple events per day. In the same way, production equipment can be used more efficiently from a central facility instead of being tied up during transport between venues.

TV 2 Denmark has taken the solution to another level by creating several set-up kits suitable for different event requirements. These are based on Net Insight’s media contribution over Internet solution Nimbra VA 220 with MPEG-4 encoding.This platform transports three high quality video feeds from ENG cameras at the venue and one return, all with embedded audio. The Clearcom VoiP intercom is also integrated.

The kit is designed to fit into a portable flight case weighing less than 32 kg, which can be carried as normal airplane luggage. It was used successfully during the Summer Olympics in Rio 2016 for TV 2 Denmark’s coverage of handball matches and sailing races.

The live event industry has grown dramatically in size in recent years, driven by changes in viewing behavior, demand to follow live action on any screen, and new revenue streams opened by new distribution paths. TV 2 Denmark has found that by transitioning to an in-house production workflow, resources can be utilized far more efficiently, and the bottlenecks associated with traditional outside broadcast production can be eliminated.

Since introduction of remote production in 2015, TV 2 Denmark has produced and aired more than 200 multi-camera broadcasts. Even more impressively, it is producing more content than before but using fewer manual resources. Every minute of production is now more cost-effective to produce, which ultimately results in more, great content and, in turn, enhanced satisfaction and loyalty from the audience.