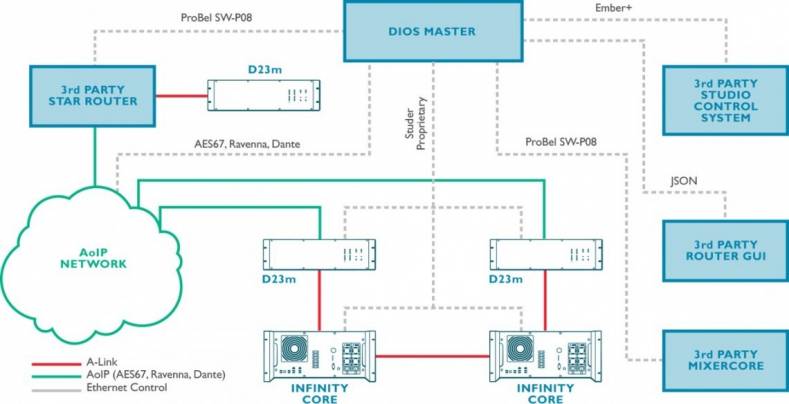 Connecting a standard microphone into an IP facility should be easy, but often it can become a hair-pulling experience. A good solution is to use Studer’s DIOS to simplify the interface.

As with all emerging technology, systems develop over time as new equipment becomes available. Building layer on layer they increase in complexity and soon become difficult to understand, administer and fault find.

It’s quite common for one control room to have access to many different studios or insert points. With traditional analogue and point-to-point AES and MADI digital systems, connectivity was relatively straight forward, but moving to the IP world adds a further level of complexity making visualization of a system very difficult.

Something as simple as connecting a microphone to a sound desk in the IP world is fraught with problems. The microphone output could connect to a Dante interface to incorporate it into an IP network and provide the timing and connectivity to route the IP packet to the sound desk. And then we convert the IP packets back to digital audio, so it may be processed by a proprietary mixing console.

Each of these interface points will have its own routing device, whether an IP network, AES or MADI studio router. Consequently, each router will have its own user control and specific skill set of understanding. Fault finding such a system is a nightmare. If the audio is breaking up, do you look at timing issues in the IP network? Packet loss? Or just an old fashioned dry joint on the audio jackfield?

To address this, Studer have developed DIOS, a system to abstract away the underlying complexity of an integrated IP, AES and MADI hybrid infrastructure. Simplifying the user interface gives a better understanding of the broadcast facility, reduces risk and improves performance.

DIOS connects to key systems in the infrastructure such as the IP routers, AES and studio routers, mixing consoles and their proprietary processors. This one user interface provides a simple to use and intuitive way to, for instance, connect a microphone over a complex network all in one step.

Engineers like to build redundancy to provide backup systems. Although this makes studios more reliable and fault tolerant, it has the disadvantage of increasing complexity. And as we move to complex IP systems the knowledge base of broadcast engineers starts to dwindle.

DIOS learns the infrastructure and connected networks, and can automatically switch to redundant paths should there be a system or cable failure. Logging and alarms are generated giving the engineer detailed data to help work out where the problem resides, enabling them to fix faults quickly.

JSON is the future

DIOS currently integrates to all Studer devices, and third-party integration is being designed including SNMP messaging to provide a common interface for multi-vendor connectivity. It’s format agnostic and can interface to AES67, Ravenna, Dante, SMPTE 2022-6/7 and SMPTE 2110.

As well as providing support for the usual control interfaces such as ProBel's SW-P08 and the Ember+, Studer have included the JSON (JavaScript Object Notation) data-interexchange format. JSON is used extensively in the IT world to exchange data between software services. It is a text-based format that is human readable and easy to understand. JSON is effectively open-source allowing anybody to connect using the protocol.

Abstracting the hardware further, I/O devices can be defined as stage boxes, and system connections as stage box links. This facilitates fast and efficient configuration when changing studios and provides routing snap shots for mixer configuration and fast recall between studio sessions.

Although it’s possible to have separate systems, each configurable from their own proprietary control, they quickly become cumbersome and difficult to understand as we migrate into IP infrastructures. Added to this complexity is the difficulty in understanding IP networks for broadcast engineers who may be new to this technology. Even seasoned IT professionals and network engineers have difficulty understanding the nuances of buffer size selection and timing models required for AoIP.

Using hybrid technology is the way forward for most broadcast facilities and installing a system that can integrate and abstract complexity is a must. Hybrid control is one of the areas traditional manufacturers such as Harman and Studer can excel. They understand the broadcast industry and the challenges engineers are trying to overcome. With the Studer DIOS they have developed a product that helps engineers succeeded in understanding, demystifying and troubleshooting IP networks.