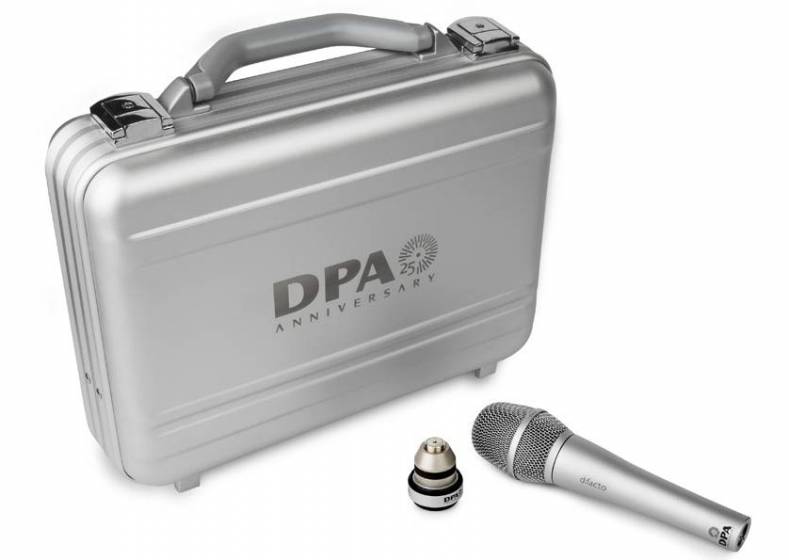 DPA Microphones clocks up its quarter century this year and is marking the milestone by issuing special editions of selected mics, backed up with a series of international events featuring leading users of the brand. The first limited edition kit features the d:facto 4018V vocal mic, while the Get Closer World Tour kicks off on 27 June with a line-up of Masters of Audio.

Originally known as Danish Pro Audio, DPA was founded in 1992 as the marketing operation for studio, presentation and live sound microphones produced by Brüel & Kjær. Since then the company has forged its own identity with a range of products for a variety of pro audio applications, including broadcast. It is particularly known for its miniature lavalier models, such as the d:screet line.

To celebrate this history DPA will be issuing three limited edition packages this year. The first was launched on 1 June and is based round the d:facto 4018V vocal mic. This is presented in a nickel finish with the DPA 25th anniversary logo on the handle. The kit also includes a SL1 adapter, also finished in nickel, for wireless systems including Sony, Lectrosonics and Shure. There are only 250 kits, 50 of which come in a specially designed suitcase, again embossed with the anniversary badge. As well as the special edition d:facto a regular black version with the SL1 is also part of the offer.

The DPA Get Closer Tour starts in New York on 27 June at the National Sawdust Theatre and continues on to the NeueHouse in Los Angeles on 29 June. The opening event will feature theatre sound designers Jim van Bergen and Nicholas Pope, plus the latter's audio team for Natasha, Pierre and The Great Comet of 1812, and opera sound designer Mark Grey. There will be a panel discussion, after which the contributors will take questions from the audience.

The LA session is to include film sound engineer Daniel McCoy, Foley mixer Geordy Sincavage (The Revenant and the Westworld TV series) and broadcast audio designer Clayton Green. UK live sound engineer and mixer Donal Hodgson will be at both events to talk about his work with Sting, Tina Turner and Primal Scream.

"DPA has grown by leaps and bounds in the past 25 years and we are excited to be able to celebrate this occasion with the Get Closer World Tour," comments chief executive Kalle Hvidt Nielsen. "We look forward to sharing the knowledge we have about acoustics and miking techniques. We will also be providing a look at the special edition 25th anniversary mic kits scheduled for release in June and July."