In 1979 — 38 years ago — the Teac 144 became the first four-track audio recorder available to use a standard cassette tape. It was labeled a “Portastudio” and became the first low-cost multitrack recorder in a line of products that’s still going strong today.

Many of us, including myself, learned multitrack editing on a Portastudio. After doing interviews with members of Orson Welles’ Mercury Company actors in 1986, I edited a documentary called “The Mercury Company Remembers” on a TASCAM Portastudio. It was analog, cassette-based and incredibly easy to use. That documentary aired nationally on public radio and was released digitally. (TASCAM is the brand for Teac’s professional product line.) 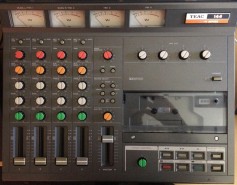 As the years passed, the company came out with many new models, always upping the feature set. Next came sweepable stacked-knob EQs and dbx noise reduction, a big boon for improving the quality of cassette audio. Many great (and not-so-great) songs were created on these devices in bedrooms and basements worldwide.

One of the great projects was Bruce Springsteen’s album, Nebraska, which was recorded in 1982 in a spare bedroom on a TASCAM Portastudio 144 and a pair of Shure SM57s. When Springsteen made the recordings with Mike Batlan, his guitar roadie, the paid had little technical knowledge. But even with dirty heads and a incorrectly set “varispeed” adjustment, the machine captured the precise sound Springsteen wanted. The final record was made from those original cassettes.

In a short history of the Portastudio, Reverb, the audio community, said that throughout the 1980s and 90s many companies, like Fostex and Yamaha, came out with their own versions of the Portastudio. But TASCAM continued to develop the system and move it forward. 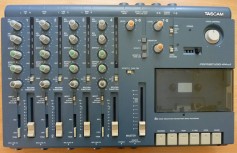 The TASCAM 414 streamlined the analog four-track format, ditching the VU meters in favor of simple, segmented LEDs. TASCAM then added a pair of line-level inputs, bringing the total number of inputs to eight and allowing for two stereo effects returns.

The 414 also added support for an optional foot pedal to be used for hands-free punch-ins. This feature proved indispensable for solo artists. Though advanced for its time, this iconic device may scream “lo-fi” by today's standards, but for many it remains the machine most associated with the term “four-track.” It was bit like the Volkswagen Beetle.

The next generation saw the introduction of the TASCAM 424, an improved machine that wasn't without its own quirks. Notably, the 424 featured three different recording speeds. While these speeds could be used creatively to produce some interesting effects, it would ultimately turn out to be overkill for most users. The transport controls were also upgraded to electronic buttons, replacing the mechanical switches of the past. 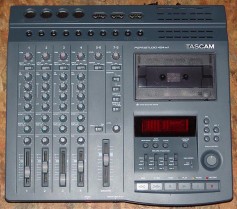 An upgraded version, the TASCAM 424 mkII, ditched the “low” speed option. It saw the addition of a list of advanced transport functions: the electronic counter, two location markers, loop-rehearsal and auto-punch functions and a display screen for controlling it all. Other improvements included a sweepable mid-band in the EQ section and greatly expanded I/O (including the first proper XLR inputs for microphones).

Many feel that the 424 mkIII hit the pinnacle of four-track technology. It gave channels five and six the same EQ and send options as the four main channels, allowing the user to mix six mono sources and made effects returns far more flexible.

As interest in recording away from professional studios exploded over the years, TASCAM churned out many variations on the Portastudio. For example, the TASCAM 488 crammed eight tracks into the cassette format (albeit with half of the fidelity). The “Ministudio” line stripped down the Portastudio features and shoved them into increasingly smaller boxes, culminating in the tiny Porta-02 before disappearing entirely from three-dimensional space. 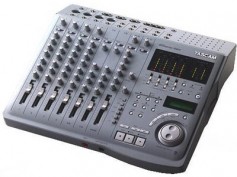 In 1997, TASCAM introduced the 564, the first digital Portastudio digital. Through the generations, digital Portastudios used Minidiscs, CDs, internal hard drives and SD cards for storage. Digital also brought tiny screens with rolling menus for the selection of multiple recording choices. As time went on, the company began simplifying the units and adding onboard special effects.

Today, TASCAM makes a wide range of Portastudios. All are digital ranging from the six-track DP-006 ($129.99) to eight, 24 track and 32 track models. The most expensive 32-track model — the DP-32SD — is priced at $599.00. It records eight tracks simultaneously to SD cards, has 21 faders, 32-track playback, eight combo XLR/TRS mic inputs and 24-bit/48kHz resolution. There are no moving parts.

As a variation on the Portastudio, last year TASCAM introduced the Ministudio, which is widely used by podcasters. With a recent software update, the Ministudio is now targeted to streaming audio and online gaming.

The Ministudio features a new driver architecture optimized for videoconferencing applications such Skype and Google Hangouts. It has real-time voice processing, special effects and audio sharing, without the echo and feedback issues that have long plagued computer-based communications. It also works with game streaming platforms like Gameshow for online gamers.

The new software includes a new audio ducking feature which will automatically lower the volume of background music or game sounds when the user begins speaking into the microphone. 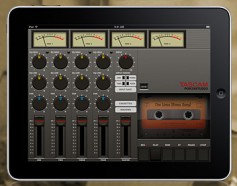 After 38 years, the Portastudio and its many variants have proven that basic, low-end gear that works well can open the door to professional use. There is even a version of the Portastudio that allows four-track editing on the iPad.

Today’s digital Portastudios can work anywhere, including broadcast, recording and home studios. The audio quality is good enough for any project, ease of use is excellent and the price is still right. That’s a good formula for long-term success and its why TASCAM is still making this legendary product.