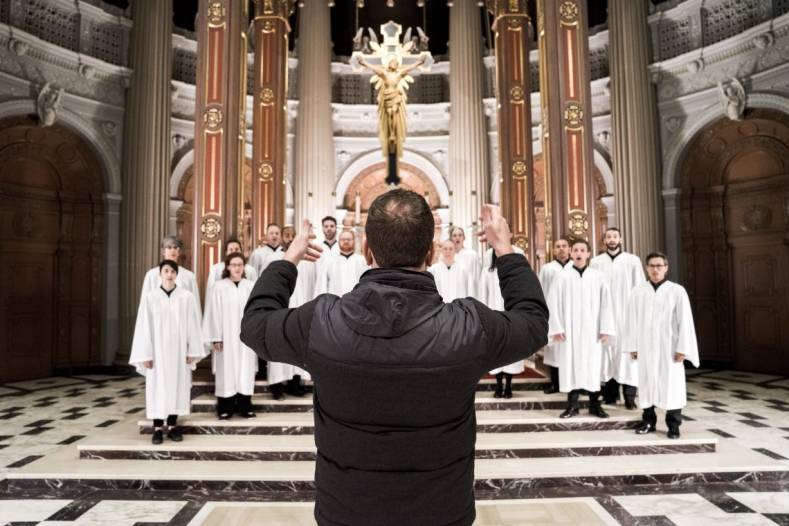 Immersive sound and pictures are becoming more mainstream, shifting away from the specialist areas of gaming and simulations. This year’s Tribeca and Cannes Film Festivals have highlighted the more mainstream potential of virtual reality (VR) productions with ‘3D’ audio by screening a video performance of Leonard Cohen’s song Hallelujah, with a soundtrack involving Sennheiser’s recently introduced AMBEO VR microphone.

The immersive interpretation of Hallelujah, performed by arranger and composer Bobby Halvorson with a 16-strong choir, is claimed to be the first VR music production to feature at the Tribeca Festival, which took place in New York during April.

Hallelujah was a Within Original Production in conjunction with Light Field imaging developer Lytro and spatial audio specialist EccoVR. The music was supervised by EccoVR co-founder and sound designer Joel Douek, who says the aim was to make sure the video included "the best quality audio" that was "as localised as possible".

The video features the much-loved and much-covered Cohen song performed a capella. Five different 'versions' of Halvorson perform the various parts of the arrangement against a black background before the image opens to feature Halvorson with the choir in a cathedral.

The performances were recorded in the very live acoustic space of a cathedral using a variety of Sennheiser microphones. The core of the recording was made using the AMBEO VR mic in A-format mode to capture four equal portions of the soundfield. These are then converted using a Sennheiser plug-in to produce B-format signals, which define the left-right, front-back and height elements to recreate a realistic spatial sound.

A-format is recorded through the AMBEO VR's four KE 14 capsules. This was supplemented by using Sennheiser MKE 1 lavalier mics, commonly found on musical theatre productions, to reinforce the voice of each performer. These were connected to 2000 Series wireless transmitters and receivers, while a MKH 416 shotgun mic was positioned discreetly as a back-up for Halvorson's voice.

EccoVR is able to record in a variety of immersive audio formats, including First Order Ambisonics, binaural and quad binaural. Its post-production facility features a Facebook360 spatial workstation, Dolby Atmos VR and the Fraunhofer Cingo Composer, which is used to produce soundtracks for smartphones and VR systems.

The VR/3D audio version of Hallelujah went on from Tribecca to feature at the Cannes Film Festival during May and will be seen at Sonar+D in Barcelona from 14-17 June and the SIGGRAPH 2017 VR Village from 30 July to 3 August in the LA Convention Centre.