Dramatic changes in the allocation and availability of radio frequencies over the last 10 years have made broadcast production more problematic, particularly as most programmes today rely on wireless microphones and in-ear monitoring systems. In response to this leading radio mic manufacturers have developed new products that use what little spectrum is left for this sector more efficiently.

Shure is pushing on with its developments in this field by introducing later this summer the Axient Digital wireless microphone and management platform. Designed to replace both its existing high-end analogue and flagship digits-based radio mic ranges, Axient Digital was launched internationally at the 2017 NAB Show and showcased at a special Open Day in London during May.

Like other leading manufacturers in this field, Shure regards digital technology as at least a partial solution to the problem of reduced spectrum. Radio frequencies have always been at something of a premium but with continuing and increasing demand from the smartphone and mobile video streaming markets, the programme makers and special events (PMSE) community, which relies on wireless mics and IEMs, and broadcast transmission operators are struggling.

The 800MHz band was the first to be cleared, with the beneficiaries being 4G mobile phone and data operators. PMSE received new frequencies in the 700MHz band but that is now being given over to emerging wireless technologies, including White Space Devices (WSD) and the Internet of Things (IoT) as well as the next generation of smartphones and tablets.

With fewer frequencies available, digital wireless mics are attractive because they are able to offer more channels in a smaller amount of spectrum, as well as offering better sound quality and longer battery life than their analogue counterparts. The disadvantages are a higher price tag the cost and the latency (delay) that digital processing can introduce to a signal.

Shure launched what up until this year had been its high-end wireless system for large-scale events, the UHF-D, in 2005. In 2012 the company introduced the Dante-equipped ULX-D after showing its commitment to analogue technology the previous year with the Axient radio mic and management system, incorporating the ShowLink real-time remote access point. 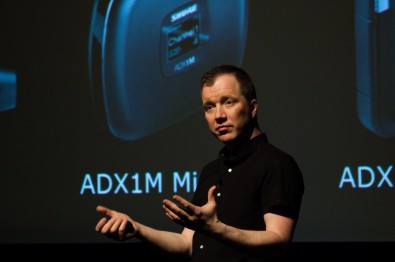 "Axient Digital replaces both the analogue Axient and the UHF-R," comments Tuomo George-Tolonen, manager of the Pro Audio Group at Shure Distribution in the UK. "What we have now is a single receiver platform that works with two transmitters, the AD and the ADX."

Both these are claimed to deliver good RF performance as well as digital audio. George-Tolonen says the only difference is that the ADX incorporates ShowLink for controlling transmitter settings, with the ability to detect and deal with interference. "The ADX also looks different in its form-factor," he adds. "It is smaller and is designed specifically for body-worn applications."

Described as a micro-unit, the ADX1M transmitter has a rounded designed with an integrated antenna rather than the external aerial found on most devices. "That kind of 'whip' antenna sticks in the back of people's necks," George-Tolonen says. "We've been listening to the industry and learned that while it's fine to have great technology with spectrum efficiency, the driver in TV and theatre is the size and shape of the transmitter. Which is why we've gone for rounded edges."

Axient Digital also features true digital diversity technology in the form of the Quadversity receiver. This is able to deal with signal fades or dropouts caused by interference. When used in High Density mode the system is able to sustain 47 channels in a 6MHz TV band as opposed to only 17 in the normal setting. For 8MHz TV bands this increase is 23 to 63. 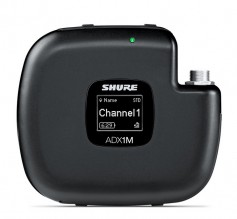 Audio range is 20Hz to 20kHz, with latency claimed to be only two milliseconds in the hop from the microphone transducer to the analogue output. Digital signal exchange is carried out using the AES3 standard, while networking capability is provided through the Dante audio over IP (AoIP)/Ethernet format. Dante Cue and Browse are used for monitoring audio outputs of any Dante unit on the system. Control functions are provided by the Wireless Workbench and ShurePlus Channels App.

George-Tolonen acknowledges the influence of changes to the UHF spectrum on the development of wireless systems but says it is a continuation of the responses Shure has already made: "The 800MHz band has gone away and we are seeing the continuing erosion of UHF spectrum. We'll have lost nearly 50 percent of UHF frequencies for wireless mic use. It's not only in the UK, the story is the same wherever you go and without wanting to sound too bleak, it's not going to get better."

While the lower, licence-free end of the market is being addressed with alternative technologies, such as DECT (Digital Enhanced Cordless Telecommunications), large-scale entertainment shows and broadcasts of live concerts, which involve substantial numbers of radio mics, are being targeted with new techniques to maximise what spectrum is available and make systems run more efficiently.

The established analogue version of Axient offered spectrum management, while the ShowLink access point allowed operators to monitor and adjust settings and performance while the system was in use. This capability has been built into Axient Digital. "It means that once a transmitter is being worn by a performer or presenter it is not out of our hands," explains George-Tolonen. "The engineers still have full control to change any parameter, managing not just the transmitters and receivers but any device on the network. For example they can see that the unit has two hours and 20 minutes of battery life and so have the confidence to carry on working for that time."

More specifically when it comes to spectrum, Axient Digital is promoted as being able to switch frequencies in the event of interference or serious failure. George-Tolonen acknowledges this is a bold claim but says changing frequencies can "absolutely be done in the blink of an eye". This was demonstrated to potential users at the Open Day, which took place at RADA (Royal Academy of Dramatic Art) in London. Among those attending were technicians working in rock & roll touring, West End theatre and corporate AV, as well as representatives of major UK broadcasters and freelancers.

"This feature has been very thoroughly thought out," George-Tolonen says. "It's only meant to be used when the interference is audible but the spectrum manager and analyser are monitoring back-up frequencies several hundred times a second. The change takes only a matter of milliseconds and you can't tell it's happening, which is the aim."

George-Tolonen concludes that Axient Digital addresses the problem of shrinking spectrum for broadcast and PMSE use. While the current version is aimed at UHF, Shure is working on a prototype for wireless mic users in the UK, where the regulator, Ofcom, has allocated PMSE space in the Air Band - currently used solely for DME (distance measuring equipment) transponders on commercial aircraft.

The AD Series version of Axient Digital is due on the market by late summer this year. The ADX Series is scheduled for early 2018.