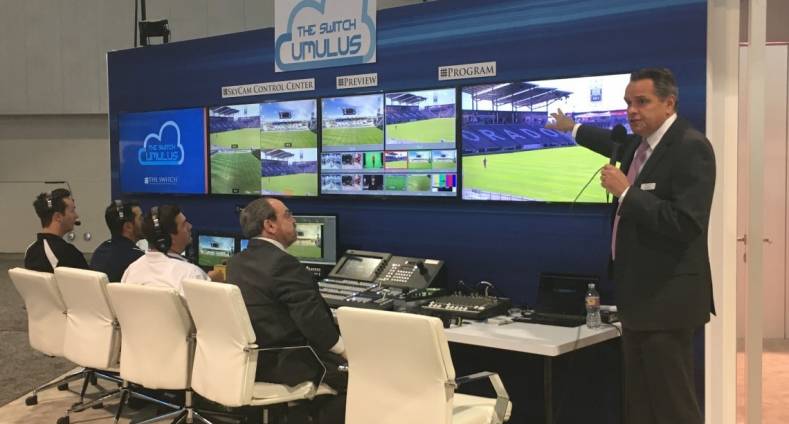 The Switch Network’s Cumulus demonstration proves that latency-free live TV production can be from anywhere at anytime.

When visitors to the 2017 NAB Show entered the South Hall Upper of the Las Vegas Convention Center, one of the first things that greeted them was a TV studio with a big “Cumulus” sign above it. The studio seemed to be constantly on the air, flawlessly broadcasting news from and about the worlds largest technical exposition. But few who walked past it realized how flawless its operation was or how extensive its impact on the video production industry could be.

“There are two major enemies in live broadcast production,” began Richard Wolf, executive vice president, marketing and corporate communications at The Switch, during our exclusive one-on-one interview with The Broadcast Bridge. “One is latency and the other is black on the air, i.e. outage and failure. Those are specifically what the architecture of The Switch Network is purposely built to combat as we are showing with this Cumulus demonstration.” 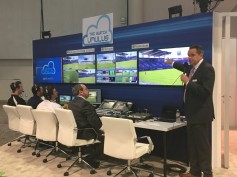 Cumulus is The Switch’s first cloud-based real time live television production service, leveraging the company’s FiveNines transmission network. Since it exists totally in a private Cloud, Cumulus is operated by production control surfaces that can be located anywhere in the world.

“We are bringing a new model to the television production business after our parent company acquired Pacific Television Center (PacTV) in November, 2016,” Wolf explained, “ which expanded our terrestrial fiber optic network worldwide and gave us access to extensive satellite resources.”

The PacTV acquisition also gave The Switch production studios in London, New York and Los Angeles. Combine all of those resources, and it brings us to that remote production studio in the South Hall of the LVCC called Cumulus at the 2017 NAB Show.

“Cumulus is a ‘Production as a Service’ model,” Wolf said. “The equipment empowering production still lives in a production hub as always. In this case it is currently the network operations center we call The Switch Cumulus at 60 Hudson St. in New York City. But the control surfaces for all that equipment, including video switcher, audio consoles, graphics, editing, servers, production communications, and technical interfaces can be shared by content creators wherever they are and whenever they are needed.”

Wolf is convinced this will change the capital and physical requirements of video production since producers will no longer have to build their own facilities. He compares it to a cell phone where only the control surface is in your hand. All the operational infrastructure is in the cloud. 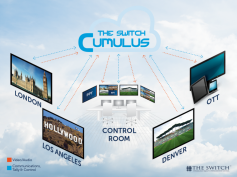 With the Cumulus Production as a Service, they can be everywhere and you can be anywhere.

There were even both a camera pilot and camera operator in the Vegas booth to fly and control the SkyCam aerial system in Denver.

In truth, however, the Cloud has been available to content creators for a decade. But, as Wolf points out, there have always been those two great stumbling blocks: latency and dead air. So how does Cumulus eliminate them?

“First, we are utilizing a network that is not dependent on IP protocol,” he said, “and we are employing a compression engine that has .06 seconds switching delay per path.”

That’s 60 milliseconds of latency over a deterministic terrestrial network and guarantees that live production is really “live”.

After all, any version of IP over the public Internet utilizes “best efforts” delivery for its packetized data, but a fixed-layer, Dynamic Transfer Mode (DTM) time division multiplexing and a circuit-switching network technology like The Switch uses is freed from the overhead and traffic management that can reduce the speed of IP.

And getting rid of dead air?

“Every service on the network is what we call ‘one plus one’ protected,” Wolf responded. “That means each feed takes two physical paths. With this diversity, if one feed goes out the other recovers nearly instantaneously. We call it ‘redundancy’ and ‘diversity’ and it keeps the plague of dead air from darkening our production door.”

Many people walked past the Cumulus booth located near the front of the South Hall Upper of the Las Vegas Convention Center without realizing how significant The Switch Network's demonstration was. But it can probably be truly said that no other exhibit was making as industry-changing use of the Cloud at the 2017 NAB Show, and chances are we are going to see much more of it in the future.