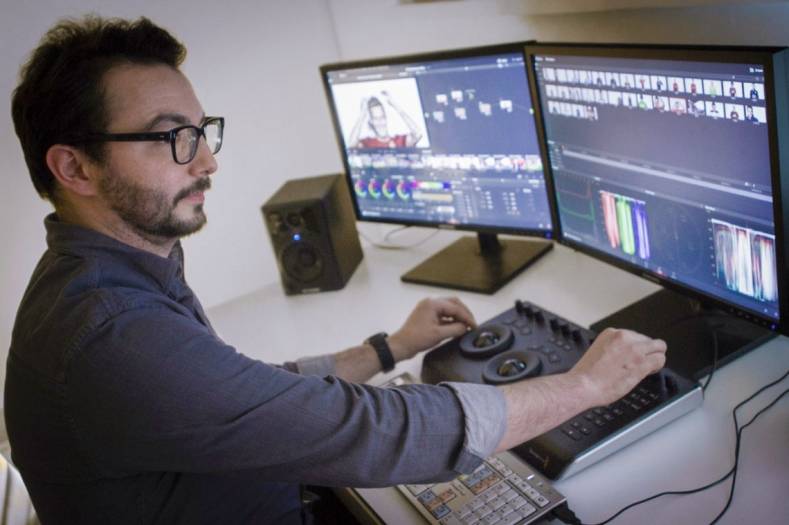 Ian Grech at the controls of DaVinci with the new Micro panel.

Blackmagic have been on a bit of a roll lately with the announcement of a public beta for DaVinci Resolve 14 and two new small colour grading control panels. I incorporated the Micro panel aimed at indie professionals into my own workflow to see what all the excitement was about. First things first – as soon as I took my new Micro Panel out of its box, my initial thought was: wow, this thing is bullet proof. Of course, I was hoping as much. As a professional freelancer by trade, I’ve used Blackmagic Design’s large Advanced Panel to colour grade at several client facilities in the past, so when they came out with two new smaller, far cheaper panels earlier this year – the Mini Panel and the Micro Panel – I was excited about what I could expect in terms of Blackmagic build quality. I was also excited by the fact that unlike the larger Mini and the Advanced panel, the new Micro panel seemed to be quite obviously aimed at someone exactly like me. When it was first announced, Blackmagic emphasized the fact that it was portable, and on their website even mentioned how easy it would be to fit next to a keyboard for simultaneous editing and color grading work. My only question was, how did that translate into a real-life professional pipeline? I decided to use the Micro on freelance projects over the course of several weeks to find out. 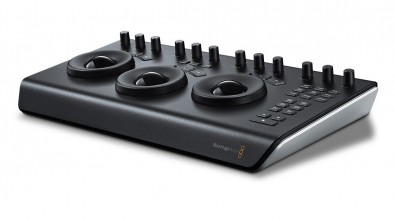 For me, one of the most crucial features to put to the test was the panel’s portability. As both an editor and a colourist, I frequently need to travel to work in-house at a variety of facilities, and my personal set up is normally literally just me and my laptop. With the Micro Panel, I had an extra 5kg added to that, which certainly didn’t make mine the lightest of bags. By the end of the first week, though, I felt that that extra weight was worth it. Over the course of my career, I’ve used a variety of other portable colour grading control surfaces and they always seemed to have a bit of a plastic feel, with track balls that were more like ping pong balls and bodies that would slide around on desks as I graded.

Though the Micro is heavier, it is still definitely portable. It is about the same size as my laptop and small enough to fit into my laptop’s case, which has an expander on it, so that I can carry everything I need around with me in one bag. Its machine aluminum body and weighted track balls mean I’m not scared of taking it on the tube and having anything break or fall off if somebody knocks into it. At the same time, it looks truly like a piece of professional equipment when you take it out in front of a client and feels like one too as I work.

There are three removable weighted track balls in the center of the panel for things like RGB balance adjustments. Above the center trackball are keys for switching between log and offset color correction, as well as a key to display DaVinci Resolve’s full screen viewer, which is great for use with laptops. At the very top of the panel, there are twelve control dials can be used to change everything from contrast and shadows to mid-tone detail or colour boost. These can then be pushed down to reset the look back to default, a great feature for experimenting with different film aesthetics. Finally, on the right-hand side of the panel, there are buttons for common tasks like Undo, Redo, and to select Previous and Next frames or clips.

The one criticism I would make here is that I wish that the panel was more customizable. All the buttons have very fixed functionalities with clear illuminated labels, and sometimes while using it I would wish there were more extra features, such as the ability to delete a node, which wasn’t there.

In terms of ease of use, however, I couldn’t fault the Micro in any way. I loved not having to worry about things like installing drivers or set up when using it at a client facility. You plug it in, it works directly with Resolve and it just goes. As a freelancer, this was a massive advantage, you don’t have to waste half your morning going through IT to get your equipment installed, you just plug it in and start grading. The micro is also charged directly via USB, so it could run directly from my laptop battery without a problem. 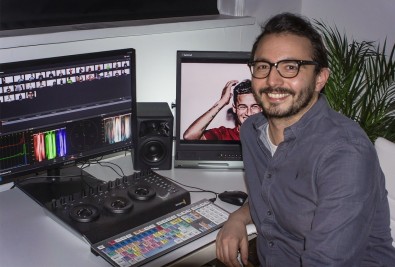 ​​Ian Grech is an editor and colourist for film and television.

Overall, especially considering this is Blackmagic’s first release of these smaller panels, I’ve been impressed and am definitely including the Micro as part of my equipment to bring with me for clients on grading projects moving forwards. It’s great to know that I could be working with the Advanced panel at one facility then bring my Micro panel with me to another, and have the same kind of tactile feel and feedback translated wherever I go. It’s like having a piece of equipment that’s as solid as the advanced panel but on a smaller scale that I can actually walk around with, it’s brilliant!