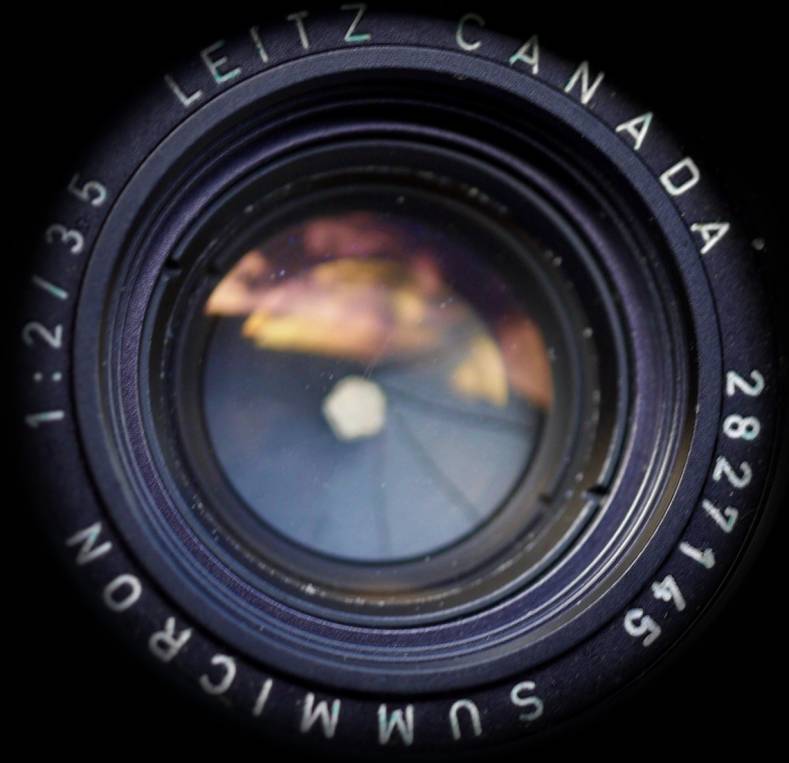 As shooters and videographers, we might well ask ourselves increasingly these days: Do we really still need an iris in modern lenses? After all, ditching the mechanical iris makes a lot of sense. For one thing, all lenses when stopped down suffer from diffraction aberrations - the softening of an image due to light bending around the iris blades. This bending of light through a pinhole-size aperture produces a multitude of tiny light sources along the blade’s edge, which in turn increases internal reflections and flare. For this reason, bright daylight scenes may appear washed out and lacking sharpness and resolution. 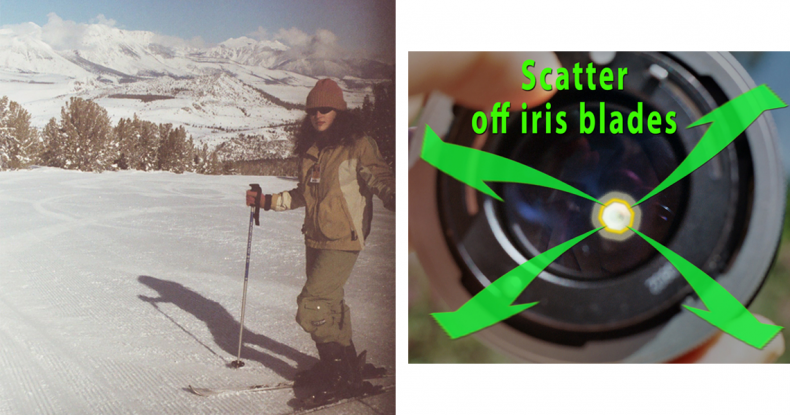 Left Image: Severe diffraction ski scene. This scene recorded at minimum f-stop on a DSLR appears washed out due to severe diffraction. Right Image: Glowing iris blades. Light bending around a pinhole-size opening illuminates the edges of the iris blades, creating internal reflections and increasing flare. Iris-free lenses do not suffer a loss in resolution and contrast from a stopped-down aperture.

One-third type sensor camcorders are particularly susceptible, exhibiting moderate to severe diffraction starting at a relatively ‘normal’ f4 - f5.6 iris, so shooting at such stops (or smaller) with your venerable small-format HD camcorder is tantamount, in many cases, to shooting standard definition. Larger sensor cameras and DSLRs also exhibit a lowering of contrast when stopped down, but not until f11 - f16. It’s no wonder under bright conditions many entry-level camcorders like the Panasonic AG—AC90 automatically apply neutral-density internally to ward off the deleterious effects of a stopped-down iris that can lead to a significant loss of resolution and contrast.

For professional shooters, a mechanical iris poses other potential snafus. Under wet or very humid conditions, there is a serious risk of damage to the iris from moisture penetrating the lens housing. Eliminating the iris and setting dial substantially reduces the risk of water damage and invasive fungus – a boon for nature shooters, in particular, operating in rain forests, in a tropical monsoon, or otherwise braving the wilds at the far-flung corners of the earth.

For itinerant shooters, iris-free lenses are inherently more rugged, and much less likely to suffer impact damage during shipping. Experienced shooters now take great pains to protect the lens iris by taping aperture rings in the fully open position. The elimination of the mechanical iris will reduce the complexity of lenses and lower the cost of manufacturing, potentially making better performing optics more widely available to broadcasters, production houses, and owner-operators.

All right, so let’s ditch the iris. What then? How do we control exposure?

Exposure control, of course, is central to our craft as shooters and visual storytellers. Intentional overexposure can add a surreal sci-fi look to futuristic programs, while deliberate underexposure can infuse drama into what are otherwise lackluster, visually bland scenes. Savvy shooters understand there is no ‘normal’ exposure; every decision regarding exposure and stop is a creative choice that (hopefully) supports the emotional stakes of the overall story.

Likewise, depth of field is a creative choice with strong storytelling implications. Objects in sharp focus draw viewers’ attention and communicate the message: Hey this is important. Look at this! At the same time, out of focus portions of the frame convey the opposite notion: Nothing to see here. Don’t look at this. It’s not important. Today, most audiences associate a narrow depth of field with drama, while a greater depth of field with deeper focus suggests a comedy, or a documentary, news, or other non-fiction program. 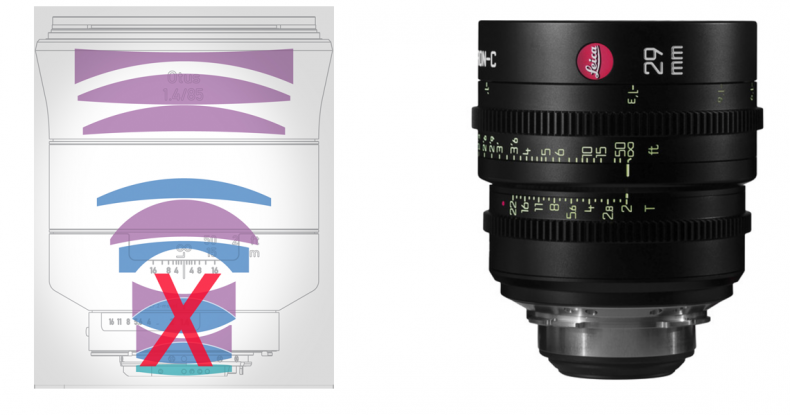 Left Image: Internal schematic of modern cine lens. The removal of the lens iris creates the opportunity for improved performance and ruggedness, at lower cost. For broadcasters, this could increase the availability of higher-end, better-performing lenses from a range of manufacturers. Right Image: Leica S lens.

For many of us shooting primarily dramatic programs, there is some advantage to controlling exposure, while simultaneously not affecting depth of field. On many 35mm TV shows in the 1980s, we set the cine lens at f2.8 and left it there. We got used to the de facto 100fc lighting level on many soundstages and the favorable DOF that came with it, especially when working with narcissistic ego-crazed stars.

Today, of course, we have a few more options when it comes to exposure control. To maintain a desired stop, we can internally adjust the camera shutter, gain, ISO, or, as we’ve done for decades utilize a supplemental neutral density filter. The lowly ND filter has evolved spectacularly in the last several years. Once associated with increased noise, muddy blacks, and loss of resolution, ND filters today are completely different animals. The new full-spectrum RHOdium filters from Schneider, for example, exhibit virtually no color shift from IR bleeding that had been the norm, especially in the higher density grades.

Advances in optical ND filters aside, the prospects for an iris-free lens improved dramatically with the advent of an electronic variable ND in some new cameras like the Sony FS5 and FS7 II. Electronic VND is inherently step-less, so exposure control can be tweaked precisely, a distinct advantage over fixed-grade glass filters or a click-stop iris that is inherently much more­­ limiting.

Sony’s electronic VND utilizes an LCD layer placed between the sensor and the lens mount. Adapting LCD technology originally developed for the global shutter, the electronic variable neutral-density filter extinguishes a high percentage of incoming light in even the brightest high-contrast exterior scenes.

Left Image: BB shooting wildlife. Center Image: Close up hawk. Right Image: Panasonic VariCam HS. For nature and expedition-style shooters, iris-free lenses are less subject to damage from adverse environmental conditions and shipping calamities. Maintaining sufficient depth of field is always an issue when shooting wildlife with long lenses. In this regard, the use of a small-format camera like the 2/3-type Panasonic VariCam HS can help enormously. Large-format S35mm format cameras are not for everyone!

A simpler approach to exposure and depth of field control in iris-less lenses might be to forego the LCD electronic solution altogether. Tiffen, for one, manufactures a thin dual-rotating optical polarizer that offers all the benefits of step-less ND without the cost and complexity of going through a light-extinguishing LCD. The Tiffen Variable ND is notable for the quality and clarity of the transmitted image; the filter’s two-stop minimum (0.6) light loss being a potential drawback to some shooters. Then again, perhaps such a light loss is not a bad thing given the high native sensitivity of cameras like the ISO 5000 Panasonic VariCam LT. Reducing the intensity of the incoming light by whatever means is a growing necessity these days with such camcorders – even when shooting at night.

Given the improved performance, ruggedness, and economy, iris-free lenses are coming, in perhaps as little as three to five years. Shooters will still have to control exposure and depth of field, in whatever way, optically or electronically, in order to capture compelling visual stories. So even if the aperture dial will be going away, the tools and technology required to take its place are already here.