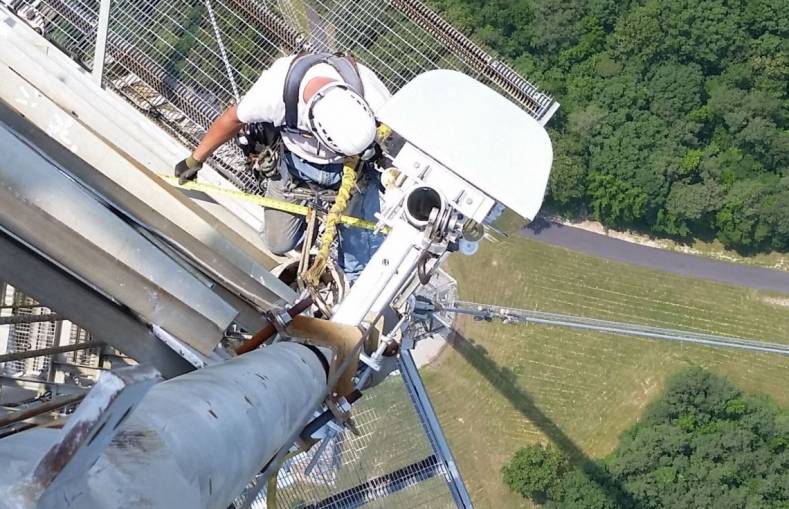 Installer double-checks the measurements while bolting a Channel 39 antenna to the WRAL tower.

WRAL-TV is the Capitol Broadcasting-owned NBC affiliate serving the Raleigh-Durham market. The station is known for pioneering ground-breaking technical innovations in over-the-air TV delivery. In 1996, WRAL was the first commercial TV station to broadcast a HDTV signal. In 2000, the station produced and aired the first complete HD newscast.

In June 2016, WRAL became the first TV station to broadcast a full simulcast of its main station using the next-generation ATSC 3.0 standard. A ground-breaking ATSC 3.0 newscast soon followed on Channel 39, under an experimental FCC license. The station has continued 24/7 ATSC 3.0 operations for nearly a year.

ATSC 3.0 promises higher-quality signals with more vibrant colors, along with a range of advanced services across interactive, mobile and streaming content. This is made possible in part by ATSC 3.0’s intrinsic IP networking capabilities, which is a complete departure from the standard Asynchronous Serial Interface (ASI) -based topology of ATSC 1.0. ASI is a one-way serial transport stream transmission over 75-ohm coax.

The transition to an IP-based transmission system means a near-complete technical overhaul is required to support ATSC 3.0 over-the-air broadcasts. Thankfully, WRAL has strong relationships with several industry-leading suppliers to make that transition as seamless as possible. For transmitters and exciters, GatesAir is the supplier we continue to turn to when it comes to products, service and support.

GatesAir Sigma transmitters supported our initial HDTV broadcasts at WRAL and sister station WRAZ, and both remain on the air today. However, it made little sense to accommodate an ATSC 3.0 channel in the same RF plant due to the very different design characteristics of an ATSC 3.0 system. We worked closely with GatesAir and our other partners, including ERI, Triveni Digital, LG/Zenith, Harmonic, Monroe Digital Alert Systems, Keepixo and Enensys to establish a separate facility for experimental Channel 39. 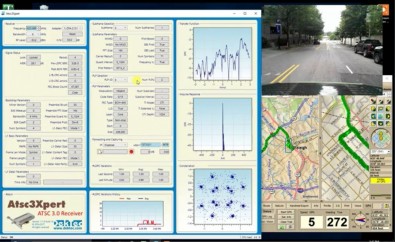 A DekTec Atsc3Xpert mounted in a vehicle is used to verify signal robustness in the market.

We opted for a GatesAir’s Maxiva ULXTE 20kW liquid-cooled transmitter, operating at 12kW TPO. The ULXTE design integrates a liquid-to-heat exchanger that transfers heat to the building’s exterior. This eliminates a lot of heat from collecting inside the plant, which reduces the air conditioning load and associated cooling expenses – especially important in a medium-to-high power RF operation in the eastern North Carolina climate.

This is just one design efficiency from GatesAir that helps us manage our costs and labor. The current-generation Maxiva solid-state transmitters are intelligently laid out on the interior, with a combined set of PA modules that you can see and reach without taking everything apart. This greatly simplifies maintenance. The magic of solid-state also means that losing an amplifier means losing a few watts, and the ULXTE’s modular design means quick replacement from a modest spare parts kit. Being down 100 watts is unnoticeable to viewers, where losing one of four tubes in a big IOT rig means losing one-quarter of your power. The difference is striking and a massive operational efficiency boost.

GatesAir’s Maxiva XTE exciter makes the ATSC 3.0 broadcast possible. Integrated into the ULXTE cabinet, this exciter rests at an important stage in the transmission path accepting IP-based signal architecture for live transmission, and preparing it for amplification for broadcast. The XTE’s built-in real-time adaptive correction (RTAC) software confirms signal integrity and compliance of all signals as they leave the system and move onward into the transmission line.

As an experimental channel that renews bi-annually, this system will be removed from air over the next two years as we move through the repack process. However, we have learned, and continue to learn how to manage payloads in an ATSC 3.0 system.

Specifically, the GatesAir system and supporting equipment has helped us learn how to carry two PLPs – one at 16QAM carrying four MB/s of video, and one at 256QAM carrying 18MB/s – within the same architecture. We have also learned how to manage 4K content for over-the-air delivery.

There is much more to learn, but working with GatesAir and our “Channel 39 Club” of partners, we are well-prepared for an ATSC 3.0 future – and all the new over-the-air opportunities it brings.

Pete Sockett is Director of Engineering and Operations for WRAL-TV and Capitol Broadcasting. He can be reached at PSockett (AT) wral (DOT) com.

At the recent NAB Show New York, a new digital ad insertion feature for the ATSC 3.0 (NextGen TV) television transmission standard was announced by Pearl TV that takes advantage of two-way interactivity via an Internet connection in combination with an…