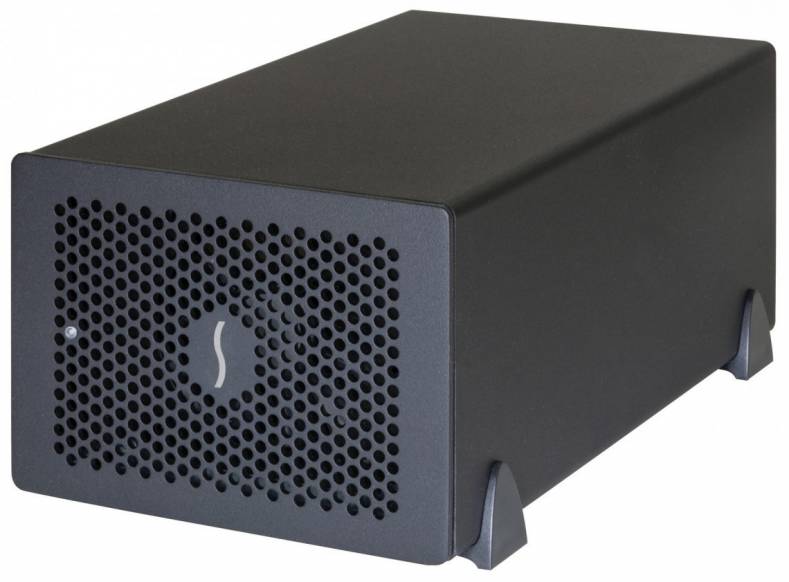 With the Sonnet Echo Express SE III, Mac computers equipped with 40Gbps Thunderbolt 3 (USB-C) ports, such as the new MacBook Pro, are able to take advantage of Thunderbolt 3's 2750 MB/s of PCIe bandwidth to support the most demanding, highest-performance adapter cards. The Echo Express SE III features three x8 PCIe 3.0 slots, accommodates full-height, half-length+ (up to 7.75 inches long) PCIe cards, and connects them to one of the Mac's Thunderbolt 3 ports via the included 0.5-meter Thunderbolt 3 cable. The unit supports most Thunderbolt 3- and Mac-compatible PCIe cards .

The Echo Express SE III provides two Thunderbolt 3 (USB-C) ports. One port is reserved for connection to the computer, while the second supports daisy chaining of up to five additional Thunderbolt peripheral devices plus two 4K monitors or one 5K display, or a single USB device. The system provides up to 15W of power to any connected peripheral or host.

The system includes an automatic, temperature-controlled, variable-speed fan that cools the cards quietly, with energy-saving operation that powers the unit on and off automatically with the computer. The Echo Express SE III's rugged aluminum housing provides robust and secure protection for the installed cards, and the included Sonnet ThunderLok 3 Thunderbolt connector retainer clip guards against accidental disconnection of the Thunderbolt 3 cable.

"As our most compact three-slot Echo Express system ever, the Echo Express SE III delivers full performance and the power of Thunderbolt 3 in a space-saving and lightweight design. It's ideal for broadcast, post, or A/V professionals who need the ability to connect multiple cards simultaneously but don't need to use full-length cards. The Echo Express SE III is the latest model in the industry's most extensive line of Thunderbolt-to-PCIe card expansion systems."