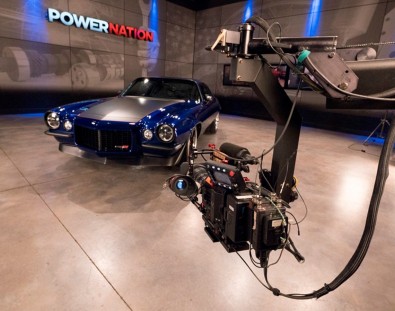 The VariCam LT on crane.

Seventy percent of the programming is shot in these studios, with a minimum of one Panasonic VariCam LT assigned to each studio (the exception being PowerNation Garage, which is shot exclusively with DVX200 handhelds). Hawkins said the VariCam LTs, outfitted with Fujinon 20-120mm Cabrio PL lenses, are utilized 70 % handheld, 20% on tripods, and 10% on jibs. “Pay-off” segments, showing the results of in-studio fabrications, are shot outdoors on race tracks, drag strips, at off-road events and so on.

“There were only a handful of cameras that met our criteria of having a large sensor, HDR, VFR, simultaneous recording options and 4K output. With its stand-out asset of dual native 800/5000 ISOs as well as all these features, the VariCam LT led the way.”

Shows are captured in AVC-Intra 4K 4:2:2, with a simultaneous record of high-resolution HD proxies. Each studio has a workstation where the directors edit a rough cut. Master files are backed up to servers and LTO. “The proxies help us navigate the thumbnails for the final edit,” Byrne noted. RTM Productions’ NLE platform is Adobe Premiere Pro.

“The importance of VariCam LT’s HDR capability can’t be overstated,” said Randy Byrne, Post Production Director for RTM. “So many of our shots are up under cars, angles that aren’t easily lit, and we never saw great contrast shooting in HD. Now, with the expanded color space, we’re seeing detail and variations in the blacks.”

Most weekends, auto enthusiasts can literally get their fix by watching the two-hour PowerNation TV block of four shows--Detroit Muscle, Engine Power, Truck Tech, Xtreme Off Road —on the CBS Sports Network, NBC Sports Network, and Spike cable networks, as well as on most of the 60+ broadcast stations owned by RTM Productions’ parent company, Raycom Media.