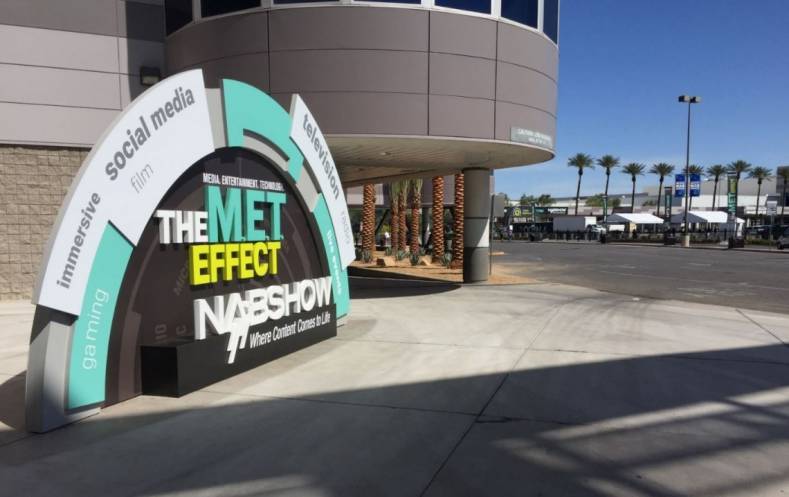 The FCC Spectrum Repack makes history repeat itself as TV transmitter, antenna and broadcast RF systems exhibits are some of the most crowded at the 2017 NAB Show. Demand for new TV RF systems hasn’t been this strong since the DTV transition early last decade.

Back when the “magic” of the only analog video tape format was the coolest thing since TV itself, most new technology displayed at NAB meetings came from Ampex, RCA, Gates, Kodak, CBS Labs and Tektronix. The NAB Show wasn’t always a “Show,” and it wasn’t always in Las Vegas. At the first 50 NABs up to 1972, most new broadcast TV equipment cost more than a new house.

The NAB convention was than a cozy meeting of few hundred call-lettered broadcasters, TV networks, a few universities and suppliers exchanging ideas in a hotel. Chief engineers were seeking solutions before that’s what they were called, and station managers searched for new ways to increase revenue like they always do. Little has changed in those respects. But, the high prices of new broadcast TV equipment made it a very exclusive event.

Usually, TV transmitters and antennas were replaced when they wore out beyond repair. Rather suddenly in the early 2000s, every TV station needed to replace their analog TV RF system with a new DTV RF system and channel for the DTV transition. Afterword, many transmitter engineers felt their work on new channels, antennas and transmitters for the DTV transition and removing the analog gear was the biggest wholesale RF change-out project they would ever see in their careers.

Jump cut to the 2017 NAB Show, where about 1000 US TV stations were just told the date of the FCC deadline to change channels for repack. Many of those now older and grayer DTV transmitter engineer pioneers are once again at the forefront of a similar, government-mandated RF system change out.

The same month that repacked stations learned their repack phase and the deadlines, many snow-topped transmitter engineers were headed to the Las Vegas 2017 NAB Show. More than a few told me this was the last transmitter change-out they could ever do. 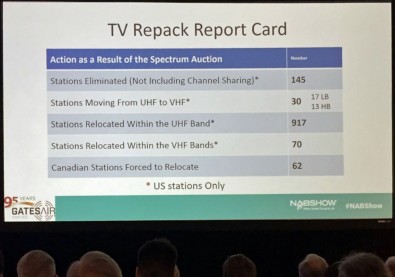 These latest FCC statistics were reported in a repack session.

Given the tight deadlines, gathering under one roof with all the resources necessary to find information to identify a final RF plan was the best bet in town.

When station engineers weren’t updating their education in repack and ATSC 3.0 technical sessions, they exploited the resources available at RF system and tower exhibits for crucial research.

The FCC’s repack schedule announcement meant that the time for shopping is officially over. It's show time.

NAB Shows are filled with distractions. Many transmitter engineers focused on repack and ATSC 3.0. Most didn’t have time to observe and explore the many details and beauty of 4K cameras and UHD broadcasting, but learning more about “next generation” ATSC 3.0 DTV was the number one or two priority on nearly every transmitter engineer’s must-see list, repacking or not.

Nearly all new DTV transmitters employ Doherty amplifiers and are ready for repack with wideband PAs and tunable exciters. A few are not wideband unless ordered that way, so buyer beware. One of the many benefits of Doherty PAs is lower power bills. Replacing a 20% efficient transmitter with by a 40% Doherty transmitter which lowers the RF plant air conditioning load can slice a respectable amount from a transmitter electric bill.

Lower monthly electric bills might not justify the cost of a new transmitter, but combined with FCC repack reimbursement and knowing ATSC 3.0 broadcasting is on everyone’s radar, a new high-efficiency transmitter is one of the best long-term deals a TV broadcaster can get today.

The tech-phrase bouncing around meeting rooms and RF exhibits was elliptical antenna polarization. Tests thus far indicate that ATSC 1.0 and 3.0 work best in many cases with approximately a 30% vertical signal component. Elliptical polarization isn’t new, FM stations have used it to fight multipath for decades. What is new is that all consumer TV receiving antennas aren’t necessarily horizontally polarized, or fixed. A vertical component can fill in nulls and gaps today, and help maintain full bandwidth in ATSC 3.0 in the future. 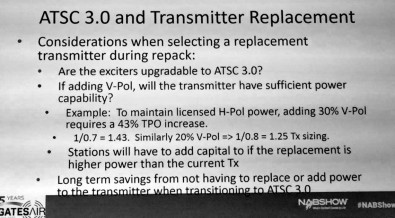 The path to the best ATSC 3.0 may include more TPO.

Looking forward to the ATSC 3.0 future, RF systems must be capable of handling the higher peak-to-average power ratio (PAPR) of the ATSC 3.0 multicarrier OFDM system. Some transmitters can handle the higher PAPR of ATSC 3.0, others must operate at slightly lower power. From the transmitter combiner output to the tip of the antenna, everything the electrical output of a ATSC 3.0 DTV signal touches must be rated for higher peak power than ATSC 1.0. The margin depends on the particular product.

Two technical paths to the future were feature topics in many 2017 NAB Show exhibits. The most imminent was the path to repack, as the FCC set its deadlines just before the show. Now we all know the repack timetable and everything appears to check-out in theory, but real-world interference questions and rumors abound and will ultimately reveal themselves.

Options for TV repacking broadcasters are myriad, such as relocating, co-locating, building a second transmitter building, new towers or leases, new feedline and new antenna perhaps with elliptical polarization. Even with all the fresh iron in new channel RF systems fully powered up, repack won’t be successful until all viewers retune their TV sets to receive their favorite networks and programs on the new repacked channels. 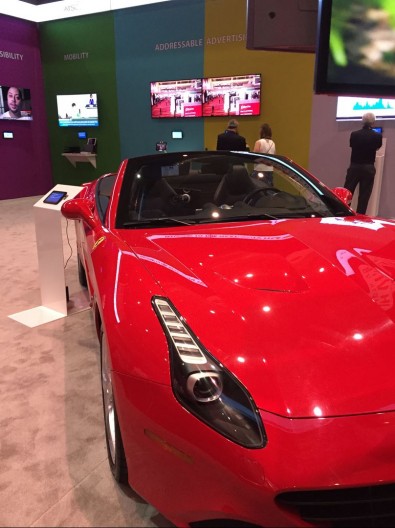 The new red Ferrari on display without a velvet rope in the ATSC exhibit was a Grand Lobby magnet.

Is anybody out there?

The other path to ATSC 3.0 broadcasting involves receiver technology, which is about as clear as mud. Without a real FCC plan as with DTV and Repack, broadcasters are on their own. If anything needs the world’s most effective “great new car” sales pitch, ATSC 3.0 is it.

Last year’s ATSC NAB Show display made sense. It showed how to use a LG ATSC 3.0 Home Gateway to distribute ATSC 3.0 channels in a home on Wi-Fi. It was staffed with technical people doing live demonstrations.

The theme of this year’s ATSC display in the LVCC Grand Lobby was “Vast and Fast” and the shiny Ferrari Red new “California T” model red Ferrari in the middle of the exhibit space was quite an attraction. But the sizzle fizzled on contact with the TV part of the exhibit. The Ferrari and the video cartoon displays were about the only dynamic objects in the exhibit.

This year’s Gateway demo consisted of a pile of three unconnected Gateway prototypes on a shelf beneath a TV cartoon explaining the concept. There wasn’t much new to learn and there weren’t many technical experts around to ask. It was proof once again that great engineers aren’t always great sales people. 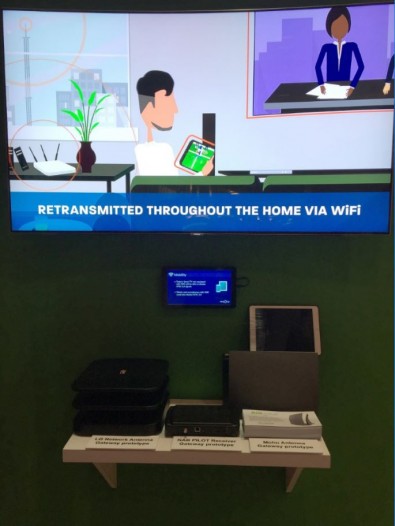 New cars, Next Gen, Plan B

Okay, ATSC 3.0 is like Google with ads that can be focused on the tiniest of metrics like a laser beam, but some smaller markets may discover the point of diminishing returns. Is a UHD business model worth the bandwidth? Who will be the market “lighthouse” station? Who will be the first to go ATSC 3.0? The lighthouse station will only carry the major network signal, not the extra money-making digital channels.

It’s going to take some awesome sales skills to get all local broadcasters to cooperate amicably.

Another question raised in technical sessions and RF exhibits is whether an experimental “Next Gen TV” ATSC 3.0 channel might be first transmitted on a different channel in addition to the ATSC 1.0 channel. Some might call it Plan B. Struggling smaller stations might be willing to sell their lower ERP licenses to “experimental” ATSC 3.0 channels in nearby markets. Otherwise, the path to ATSC 3.0 is quite cloudy. Which station in your market will flip to ATSC 3.0 first? Which will be the last? 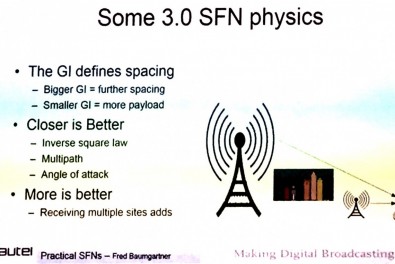 The benefits of SFNs were a major new aspect of ATSC 3.0 transmission.

Another question is about the new relevance of single frequency networks (SFNs). One NAB session speaker said he would rather have low KW ERP SFN transmitters at points every mile from the studio rather than a megawatt blowtorch at >1000’ HAAT. With ATSC 3.0, data rates improve as c/n improves. See article, "Moore’s Law Gets a Phone Call."

The bigger question for broadcasters is whether ATSC 3.0 is worth the risk of making your viewer’s TV sets obsolete. Every viewer is going to need a new TV set or at least a Home Gateway. The Home Gateway is the only path to protect ATSC 1.0 receivers that have HDMI or Wi-Fi inputs from becoming obsolete.

When you strip back all the technical details and uncertainties engineers will overcome, the question remains: “Will the sum of cheaper targeted narrowcast ads running in a timeslot be worth more than a single traditional ‘shotgun’ broadcast ad in the same time slot?” That is the fuel it will take to power the sizzle of ATSC 3.0 and it is up to the marketing and sales geniuses to make it happen.