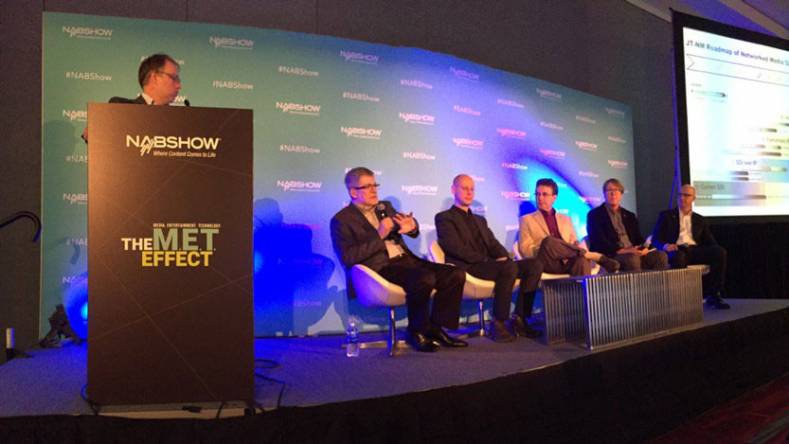 The IP Showcase gave hope that costly format wars can be avoided in the march towards all-IP production workflows.

The objective was to rally behind common standards for transmission and interoperability in live production over IP and demonstrate recent progress made, while highlighting what still needs to be done. Motivated by a desire to avoid the time-consuming and costly format wars that bedeviled various other step changes in broadcasting over the years, the IP Showcase itself was a joint effort between nine key industry bodies, the AES, AIMS, AMWA, EBU, IABM, MNA, NAB PILOT, SMPTE, and VSF. Some of these, such as EBU, represent primarily public service broadcasters, while others are standards bodies, such as SMPTE (Society of Motion Picture and Television Engineers).

The body that stands out as a driving force behind the IP Showcase though was AIMS (Alliance for IP Media solutions), without which the event would not have happened. While SMPTE dates back to the beginning of broadcasting, having been founded just over a century ago in 1916, AIMS is the new kid on the block, established just 16 months ago by five vendors specifically to set a common direction in the IP production area. Since then the five founders, Grass Valley, Imagine Communications, Lawo, Snell Advanced Media and Nevion, have been joined by most of the big vendors such as Cisco, Ericsson and Harmonic, with strong support from broadcasters and pay TV operators.

When first launched, questions were raised over whether there was a need for another standards body when there was already the Video Services Forum (VSF), as well as SMPTE itself. But AIMS saw the need for a body dedicated to IP and cited as its model the UHF Forum, which saw itself as a global advocacy body to promote UHD interoperability but without developing the standards itself. AIMS set its mandate as being “to bring IP solutions to market that offer complete interoperability, are based on open standards, and integrate seamlessly into media workflow environments to foster industry innovation and efficiency.” It said that the VSF would be a major source of standards and guidelines that it would promote.

In the event AIMS has exceeded its initial expectations by seizing the standards initiative itself and becoming the flag bearer for interoperability. As a result, various proprietary efforts have withered on the vine and by the end of 2016 all key vendors had agreed to support the open standards AIMS had endorsed.

This has spawned two standards sets, firstly SMPTE 2110 covering carriage, synchronization and description of what are known as the three essences of IP streams, that is video, audio and data, with the latter embracing metadata and control, all for live production. The second set is Network Media Open Specification (NMOS), focused on the equipment, defining how so-called media nodes can be discovered and defined within networks. As broadcasting becomes more open with greater interworking and collaboration between different production houses, the need for these two standards sets to work together and enable full interoperability across infrastructures is greater than in the past.

AIMS helped drive SMPTE forward shortly after its formation in January 2016 to develop SMPTE 2110, which was based on the existing VSF Technical Recommendations TR-03 and TR-04. It is now established as the de facto for essence based transport over IP, comprising at least 7 parts addressing the various areas. For example, SMPTE ST-2110-10 covers System Timing and Definitions, while SMPTE ST-2110-20 is for Uncompressed Active Video, SMPTE ST-2110-30 for PCM (Pulse Code Modulation) Digital Audio for uncompressed digital recording and SMPTE ST-2110-40 for Ancillary data.

Work on the standards is not yet complete, with the Ancillary data still ongoing, but with full ratification expected in a few months. At NAB therefore the IP Showcase interoperability demo was confined to the first three on system timing, video and audio. There was also a successful NMOS registration and discovery interop demo.

Interoperability around IP was also the main theme at NAB during a panel discussion on how to move a broadcast organization into IP and the cloud. The discussion ranged around IP standards for professional facilities, the enabling of personalized and immersive content, VR/AR/MR standards updates and next generation audio. The panel was held by the Inter-SDO group, an informal aggregation of standards development organizations (SDOs) that includes the EBU, SMPTE and again AIMS, as well as several global industry forums.