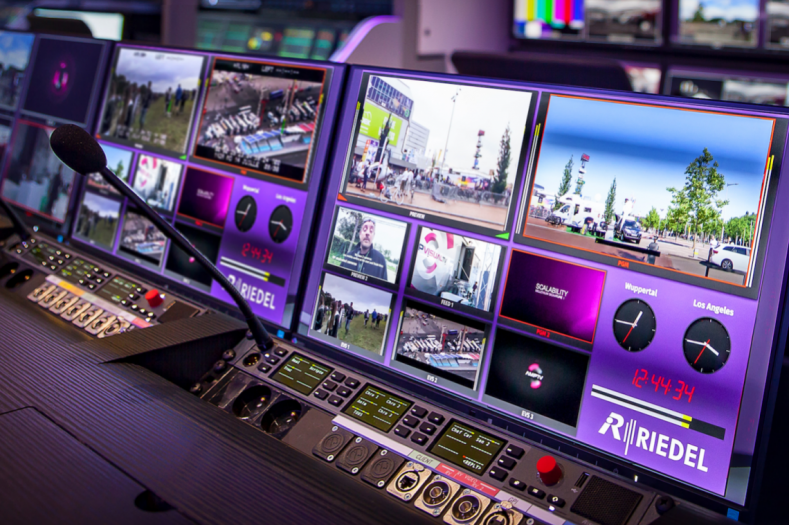 Riedel Communications is making a big splash at the 2017 NAB Show with its new DECT-based wireless intercom but the company kept back three other debut products for the start of the exhibition. Alongside Bolero the comms specialist introduced a MultiViewer virtual app for the MediorNet integrated networking system and two additions to the SmartPanel range of interfaces.

MediorNet is part of Riedel's concept for a decentralised network that carries, processes and routes signals. The new virtual MultiViewer is based on MicroN distribution hardware, which it is designed to expand upon using software. A single MultiViewer device is able to see any input on a MediorNet system, with enough processing power for a total of 18 signals.

It is possible to route feeds to anywhere on the MediorNet, with additional connectivity offered through local inputs and outputs. The MultiViewer also has a range of processors for scaling and positioning signals, as well as graphics capability to incorporate logos and other images. Other features include tallies, under-monitor displays and audio level meters.

Among the latest features included in the MultiViewer is Net Configuration. This allows set-ups to be stored and available across the network, instead of on a localised basis. Commenting on the thinking behind the MultiViewer and MediorNet in general, Riedel product manager Dr Lars Höhmann said, "A fundamental benefit of a decentralised signal network is the ability to put signal inputs and outputs where they are needed rather than at a large, monolithic router that requires additional cabling."

The SmartPanel range now offers the DSP-2312 Desktop SmartPanel and the HandsFree app. The DSP-2312 interface is claimed to be the first key panel intended to be multi-functional. Among the functions on the unit are 12 keys, two TFT touch screen LCD displays and an integrated power supply. Connectivity options are AES67, AVB and AES3, allowing the panel to link directly to Riedel's Artist digital matrix intercom.

The SmartPanel HandsFree app enables SmartPanels to be controlled from iOS and Android equipped smartphones through Bluetooth connections. Audio from the phone can then be routed into an Artist matrix.