Magewell used the 2017 NAB Show as the launch pad for its new Flex I/O family of PCIe input-output cards. Extending the company’s video capture hardware benefits and expertise to playout applications for the first time, the Flex I/O series continues Magewell’s hallmarks of reliability and cost-effectiveness.

The first model in the new product line, the Flex I/O SDI 4i2o, features four input channels and two output channels with 3Gbps SDI interfaces. The Flex I/O SDI 4i2o supports frame sizes up to 2048x1080 – including 2K digital cinema specifications and HD video formats such as 1080p60 – plus 16 channels of embedded audio in each SDI signal. Input channels, as well as the two outputs, can be paired for dual-link SDI connectivity. 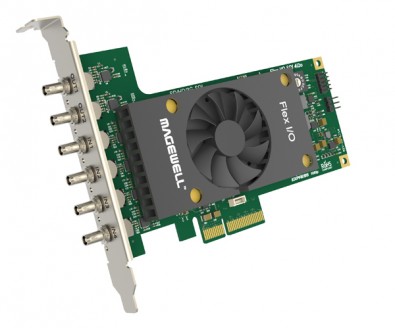 All inputs and outputs can be used at the same time with independent resolutions, frame rates and processing settings, maximizing user flexibility. Each input channel can also be routed to multiple software applications simultaneously, enabling concurrent tasks such as live streaming, recording, preview and playout all from a single PCIe card. While the six independent channels already provide exceptional I/O density, multiple cards can coexist flawlessly in the same system for even higher channel-count uses.

The Flex I/O series also retains all of the powerful attributes of the Pro Capture family, including 4:4:4, 4:2:2 and 4:2:0 color space support, and ultra-low latency as little as 64 video lines. The new Flex I/O SDI 4i2o can also extract timecode and obtain ancillary data from SDI input signals.

Flex I/O cards will initially be available with drivers for Windows and Linux operating systems, with Mac OS X support following shortly thereafter. The Flex I/O family will be compatible with popular APIs such as DirectShow and V4L2, while a comprehensive SDK will enable third-party developers to directly take advantage of the cards’ full advanced feature set and unique capabilities.