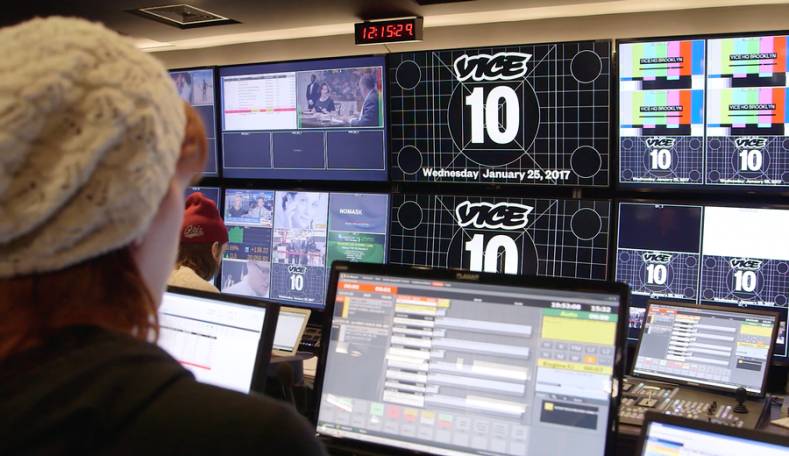 What started out as a men’s magazine called VICE has grown into a 24-hour channel called VICELAND, which includes a nightly news program for HBO, with no on-air anchor, called “VICE News Tonight.”

“One of the things that we do differently is that we challenge every producer, every editor, every designer to say there are no stories we can’t tell,” said Josh Tyrangiel, executive vice president of News for VICE News. “So, how are we going to tell them?”

Instead of an on-air presenter, “VICE News Tonight” uses creative graphical effects to transition from one show segment to the next. The VICE brand also uses a minimalist design, which needed to be reflected in the graphics used on air during the newscast.

When creating images for the daily show, the “VICE News Tonight” control room staff use a new tool from Vizrt, called Viz Pilot Edge. This tool enables the user to populate graphics and video templates in their existing Octopus newsroom computer system. 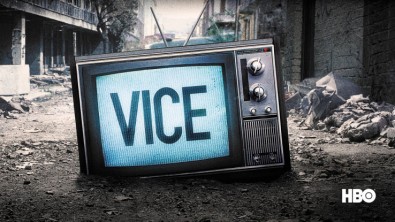 Instead of an on-air presenter, “VICE News Tonight” uses creative graphical effects to transition from one show segment to the next.

Viz Pilot Edge is a crucial part of our workflow in building and crafting the show every day,” said Joe LaMonica, Technical Director/EIC for VICE News Tonight. Having all components of the story in one template makes it easy for them to change the run order as they fine-tune the show.

LaMonica said that VICE also needed a newsroom system that complemented their workflow in an all-Apple Mac environment. “The ‘VICE News Tonight’ workflow is a little different from the traditional newsroom workflow,” said Lukas Kotek, Project Director from Octopus. “A lot of their work in Octopus is centered on stacking the show for final playout. But with they also have complicated transition that required us to create custom scripts to adjust the timing as needed. These scripts, along with our built in communications with Viz Mosart, gives VICE a lot of control over the pacing and transitions of the show, all from within the Octopus interface. And they can easily make changes, adding stories or adjusting the run order, while in a live production.”

The entire show exists in what is called “The Stream.” This is the graphics-based transitions that tie together a theme between show segments, or packages.

“For us, graphics are that element of the show that carry things on and give a consistent feel to the show,” said Charlie Travis vice president of Technical Operations for "VICE News Tonight"

The design of the graphics are based on whitespace, with text, images, videos, and maps filling in the white space to act as a bridge between stories. “The graphics being minimalist allow the content to take center stage and they really are just punctuation on top of the stories to draw your focus to the facts we are trying to convey,” said Lucy Paynter, Real-time Graphics Art Director for "VICE News Tonight." 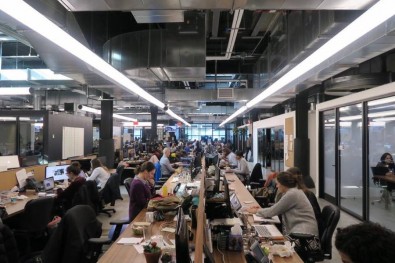 To create transitions, VICE News Tonight uses scenes composited in real-time with Viz Engine. Using Vizrt’s technology allows VICE News Tonight to seamlessly combine their video and real-time graphics, creating a dynamic transition between packages as part of their final production. The Octopus newsroom system performs all the calculations for transition times and overlap of clips plus other attributes that are needed to achieve these transitions.

In the hours leading to the live show, the production team is often fine-tuning the run order to decide how each package relates to the next; adjusting audio, graphics, and transitions. This is all in an effort to ensure the “mood” of the production is perfect for when HBO airs the show at 7:30pm.

VICE News Tonight uses a combination of traditional studio automation and an integrated graphics and video workflow. The Viz Mosart automation system controls the production switcher, audio, clips, and overlay graphics. Complex elements such as the custom transitions that are unique to VICE News Tonight, are composted with Viz Engine, combining graphics, clips and audio into a single element.

“Viz Mosart gives our editorial team the confidence that we can put together a polished final product in a short amount of time” said Joe LaMonica. 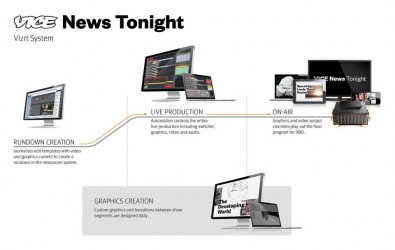 “Without Vizrt we wouldn't be able to put together a day-of-show. The amount of time required to output an entire episode would push past our air-time,” said Charlie Travis. “Vizrt provides a layer of consistency to our show that you would only normally find from a host going from package to package.”

“We're very excited about how the collaboration can bring even more ease and flexibility to our workflow,” she said. “The goal is, by developing our production environment around Vizrt's tools, VICE News's content can be adapted so that we can cover any world event in our own voice, whether that be live on HBO or on our online platforms.”

Vizrt will exhibit many of these graphics tools at the 2017 NAB Show.