Saankhya Labs is an India-based developer and maker of chipsets and modules.

Acrodyne and One Media’s partnership with Saankhya Labs is a bold step toward ATSC 3.0 implementation.

Under the agreement, Saankhya Labs will begin the development of a global standards supporting ATSC 3.0 chipset that will enable various types of consumer devices to receive the Next Generation television standard. Those devices will include televisions, cell phones, tablets, dongles, gateways and automotive units.

The intent is to accelerate and stimulate the activities associated with the incubation of the ATSC 3.0 chipset development as a pre-cursor to a full-fledged development program. During the project incubation stage, key team members of Saankhya Labs will engage in chip architecture definition and algorithm identification in collaboration with Sinclair and ONE Media 3.0 technical leads.

Formed to begin the development of a “Mobile First” ATSC 3.0+ chipset that supports global standards, the partnership intends to leverage Saankhya Labs’ software defined technology to accelerate the development of chipsets in anticipation of FCC approval of ATSC 3.0 in the US later in 2017.

On the cusp of possible privatization, the Indian Digital Terrestrial Television (DTT) sector also represents a huge opportunity for application of this Next Generation standard, and Saankhya Labs plan to use PROGIRA plan to study deployment in that country. 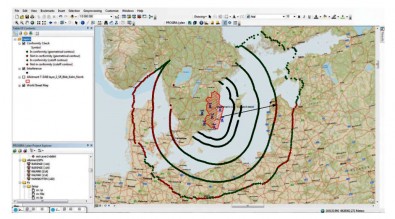 PROGIRA Frequency Planning Module shows an example calculation where the network implementation is not in conformity with the GE06 plan.

“We are delighted to support this exciting development activity for ATSC 3.0 in India in parallel with our own efforts to bring the new standard to the US broadcast market” said Andy Whiteside, General Manager of Acrodyne Services and President of Dielectric. “The underlying flexibility of the standard, including “Mobile First” use cases, offers opportunities to evolve beyond “just TV” to meet the unique needs of large markets like the United States and India, and PROGIRA plan is a powerful tool to evaluate true reception probabilities in real-world broadcast deployments.”

“PROGIRA plan augments our systems engineering capabilities in becoming a comprehensive solutions provider to the Indian and global markets. It allows us, for example, to recommend the optimum network design choices for Single Frequency Network and gap-filler architectures for robust indoor coverage in markets that will collectively account for almost a billion mobile devices,” said Parag Naik, CEO of Saankhya Labs. “This will help drive down infrastructure costs at the same time maintaining service quality.”