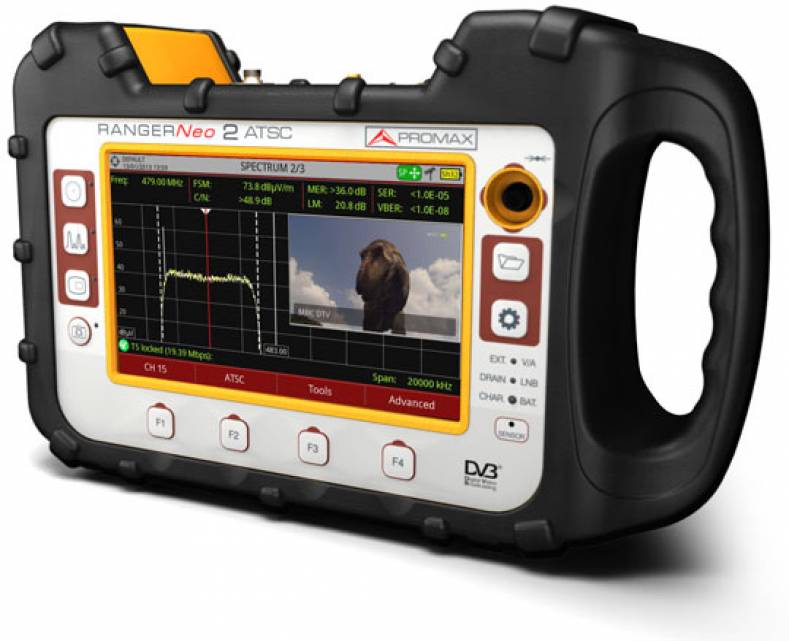 During the repack transition, stations will need to conduct performance tests to verify that their new channels comply with FCC rules. PROMAX will exhibit a solution at the 2017 NAB Show.

The FCC’s spectrum reallocation plans will be one of the hot topics at the upcoming 2017 NAB Show. Some TV stations are required to vacate their higher UHF channels and move their transmitters to the new frequencies by December 2019.

The PROMAX RANGERNeo 2 ATSC is a cost effective solution that helps doing so. Field strength measurements on the digital ATSC signals for example are made according to FCC specifications, using a 100 kHz resolution filter and integrating the channel power over the 6 MHz bandwidth.

In combination with an optional GPS the RANGERNeo 2 ATSC can also perform signal coverage analysis and plot the information on Google Earth. Other functions available are shoulder attenuation measurements, constellation diagram, TS analysis including PSIP and captioning, all in a 5 pound analyzer.

The fast & accurate spectrum analyzer has a 90 ms sweep time with amazing resolution. It has a variable span in 10, 5, 2 or 1 dB/DIV vertical scales. Spectrogram identifies random interferences at a glance to allow an early detection of intermittent impairments that may occur in very short periods of time and cannot be otherwise monitored. An 8-VSB constellation display reveals signal impairments at a glance.

RANGERNeo 2 ATSC allows for measurements of IPTV signals and contains a feature to visualize the distribution of the IP Packets in function of their interarrival times. Its purpose is to check the packet reception continuity for the selected stream.

It also can capture the received TS in real time into its internal memory. The recorded TS can then be decoded, analyzed or copied to a computer via USB.

In the last article in this series, we looked at SDP files and the importance they play in identifying source and destination devices. In this article, we look at why we combine layer-2 switching and layer-3 routing, and why broadcasters…