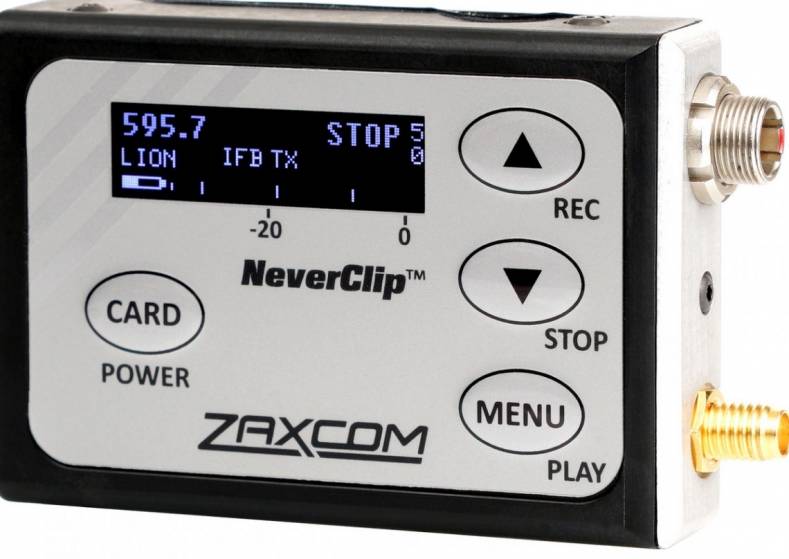 Wireless microphone transmitters have been getting smaller over the last ten years and Zaxcom will be at the 2017 NAB Show with its latest miniaturised offering. The ZMT3 is based on the company’s ZHD (Zaxcom High Density) modulation technology, which enables at total of ten channels to operate in a single megahertz of spectrum.

The ZMT3 shares characteristics with other units in the Zaxcom Digital Wireless range and also features integrated recording capability, PowerRoll, the automated output power adjuster that reacts to recording data, and NeverClip, based on two individual analogue to digital converters that work together to produce 125dB of dynamic range.

Its key physical feature is its size. The ZMT3 measures 55.8x40.6x14mm and weighs 62g (2.2oz). Zaxcom says this makes it well suited to television and film production, as well as live event work. The ZMT3 is able to transmit encrypted signals and remove unnecessary intermodulation to produce a clean signal. Recording is in the lossless MARF (modular audio recognition framework) file format, which can be converted to both Broadcast WAV and MP3. On-board recording is to a removable microSD card.

As with other Zaxcom transmitters, the ZMT3 runs with the ZaxNet 2.4GHz networking system. This is used to control gain, frequency channel selection and output level remotely. Other features include: a graphic OLED display, a NP-50 battery with approximately 5.5 hours running time and a removable antenna. There are two versions of the transmitter: model ZMT3.5, operating on blocks 20 to 23 (512-614MHz) and model ZMT3.6, which runs in blocks 23 to 26 (596-698MHz).