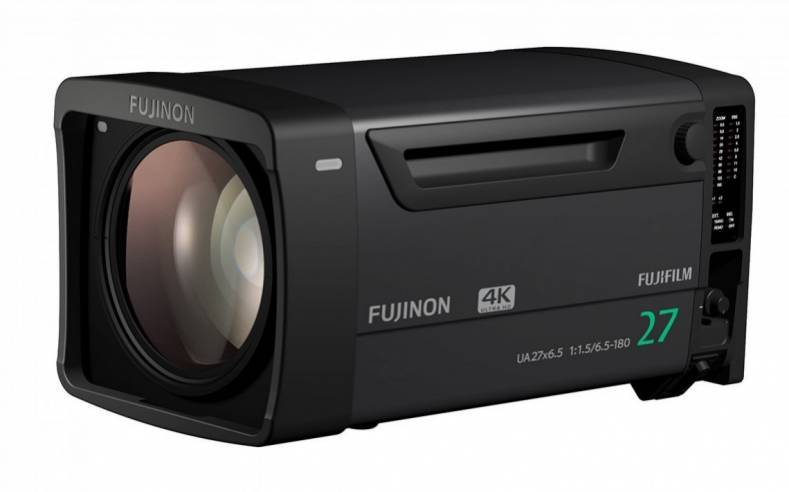 Fujifilm will introduce a Fujinon 4K-compatible studio lens, the “UA27x6.5B”, at the NAB Show 2017. The 27x zoom is the latest lens in the company’s Premier UA Series of 4K 2/3” lenses. The UA Series is the world’s first designed specifically for UHD broadcast applications.

The Fujifilm Fujinon UA27x studio lens delivers edge-to-edge 4K optical quality for 2/3-inch cameras. The UA27x has a focal length of 6.5-180mm and a built-in extender, which doubles its focal length.

The lens features the high resolution, high contrast, and high dynamic range that are hallmarks of all Premier 4K and 4K PLUS UA Series lenses. It employs the latest High Transmittance Electron Beam Coating (HT-EBC) resulting in richer colours and greatly improved blue response and transmittance. HT-EBC, coupled with Fujifilm’s exclusive Aspheric Technology, reduces ghost and flare and increases light transmission. The latest optical simulation technology was used in the lenses’ optical design to prevent resolution degradation around the edges and control aberrations, thus achieving 4K image quality across the zoom range. An aperture shape close to that of a circle is achieved by adopting nine aperture blades, which provides a more natural bokeh.

The lens is equipped with 16-bit encoders, capable of high-resolution output of lens data, including zoom and focal position information. It can be linked with other systems such as virtual studios for combining CG images with live action footage.

The new Fujifilm UA14x4.5 (left) and UA18x5.5 are aimed at the 4K videographer looking for lightweight lenses for shoulder-mount cameras.

The UA18x5.5 and UA14x4.5 are designed for use with the latest shoulder-mount 4K cameras  The UA18x5.5 weighs 2.04kg and covers focal lengths from 5.5mm on the wide angle end to 100mm on the telephoto end, making it useful for production situations that require added mobility such as news reporting and on-location production. The UA14x4.5 covers the ultra wide angle focal length of 4.5mm despite its compact body, measuring just 238.5mm, allowing you to go up close and personal during live sport coverage or on-location production with a real sense of depth.

The UA27x studio lens and the new UA14x4.5B and UA18x5.5B handheld lenses.can be seen along with the complete FUJINON Premier 4K PLUS and 4K product families within the company’s NAB Show booth.