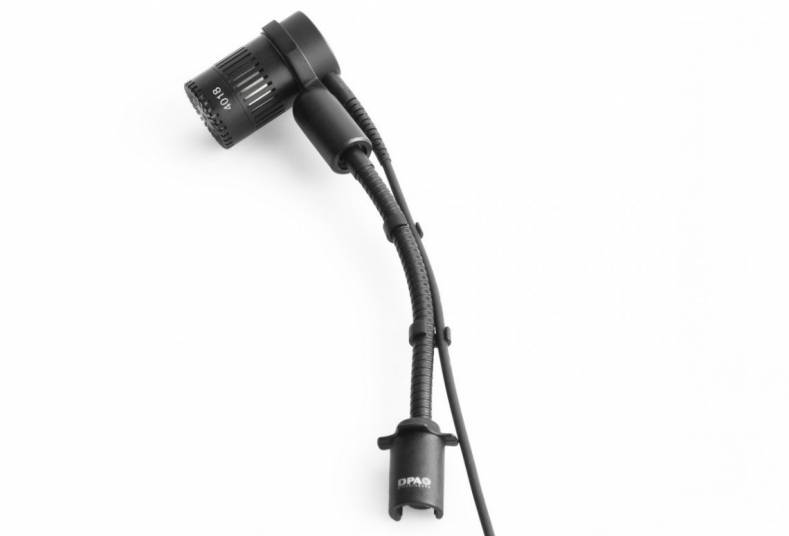 Despite increasing constraints on available frequency spectrum, broadcast productions continue to demand more microphones to be used wirelessly. DPA is known for its lavalier mics being used in wireless mode for TV production and live sound applications such as theatre but the manufacturer has introduced new technology to allow other models in its range to be used without cables.

During the 2017 NAB Show DPA will be showing the MMP-G modular active cable for the Microdot connector and GSM4000 mini gooseneck shock-mount, which allow its modular d:dicate broadcast mic capsules to be adapted for wireless use. The MMP-G is a pre-amplifier featuring active drive to balance impedance between different systems, which in turn cancels out frequency interference. By using this unit, mics such as the d:dicate 4017 shotgun and 4018 super-cardioid capsules can be fitted to booms and used in conjunction with radio transmitters.

The selected d:dicate capsule sits in the GSM4000 gooseneck accessory. This features an integrated shock mount to cancel out movement and handling noise. Both the GSM4000 and MMP-G were first shown at IBC 2016, where Anne Berggrein, vice president of marketing at DPA, said the systems were intended for broadcast, particularly boom work, and music, with capsules attached to instruments such as violins.

"Many people using the d:dicate capsules wanted a wireless solution," Berggrein further commented. "We already work with a number of wireless system manufacturers, including Shure, Lectrosonics, Sony, Sennheiser and Wisycom. The d:dicate range of 19mm capsules is typically used in studios or for live sound but people are finding new ways of using them." She added that the pre-amp and shock-mount combination received a "good response" at IBC.

Ahead of the NAB Show, Christopher Spahr, vice president of marketing and sales with DPA Microphones, said, "The addition of new accessories that allow our microphones to become wireless opens up more choices for our customers who need flexible solutions. Our R&D department has also been hard at work to develop a new product for our mobile journalist customers. We look forward to debuting this at NAB 2017."