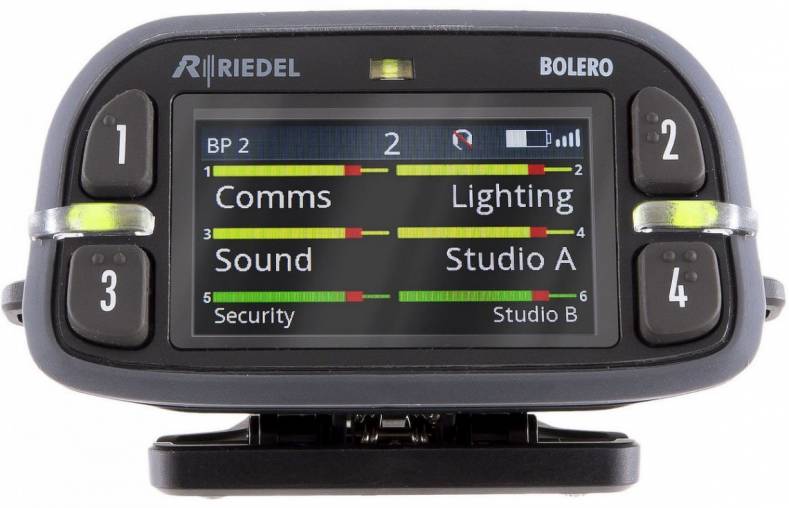 DECT wireless telecom technology and IP connectivity are making more inroads into the intercom market with the latest product release by German specialist manufacturer Riedel Communications. Using this recent Prolight + Sound 2017 exhibition in Frankfurt as a showcase, the company has launched the Bolero wireless intercom, which it describes as a combined belt pack, key panel and walkie-talkie radio.

The new Bolero DECT (digital enhanced cordless telecommunications) wireless intercom integrates with Riedel's digital matrix comms platform, the Artist. It is designed to operate over IP networks using the AES67 interoperability standard. This is done through a series of decentralised antennas that connect to AES67 switches and on to Artist frames fitted with AES67 client cards.

Belt packs are described as familiar Riedel-style panels, only in wireless form. The system incorporates a "high-clarity voice codec" intended to produce both greater intelligibility of speech and more efficient use of RF spectrum. This last feature is claimed to allow for twice the number of belt packs connecting to a single antenna, with the same audio bandwidth, as other systems running on DECT.

A key consideration in any communications system is the amount of delay, or latency, on the connection. The codec used for Bolero is said to produce "excellent latency characteristics", while at the same time using processing power efficiently, thus reserving DSP for other applications.

Another feature exclusive to Riedel and Bolero is ADR (Advanced DECT Receiver). This diversity receiver technology is used to reduce the susceptibility of devices to multi-path RF reflections. Bolero is intended to be a point-to-point system with provision for seamless roaming.

Belt packs are fitted with Bluetooth 4.1 capability, which allows either a Bluetooth headset or a smartphone to be connected to the intercom system. A smartphone can be used as it would be for 'hand-free' speaking in a car. Operators are also able to take calls on their phones and listen using the belt pack headset. Calls can be made and routed into the intercom matrix without the need for a telephone hybrid unit.

Development has gone into making the registration procedure between the belt packs and antennas quick and straightforward without having to go through menus and applying an identification code. "Bolero incorporates Near Field Communications technology into both the belt pack and the active antenna," explains Jake Dodson, director of product management for Riedel. "The user needs only to touch the belt pack to the antenna to complete the registration process."

Commenting on the launch of Bolero, company chief executive Thomas Riedel said, "A lot of time and effort has gone into every phase of Bolero's development, a true ground-up development touching all aspects of design. We are proud to share that the BBC is already building its new studio intercom systems round the Bolero wireless concept."

Bolero will also feature on Riedel's booth at the 2017 NAB Show.