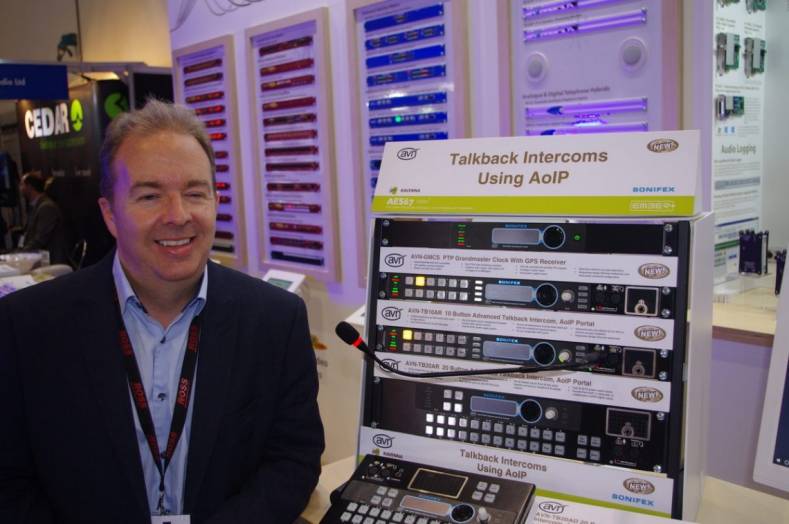 UK studio and monitor/processor equipment manufacturer Sonifex has expanded its range of audio over IP (AoIP) products with the launch of the AVN studio and outside broadcast truck talkback systems. These will be seen at the 2017 NAB Show and demonstrate the company’s continuing integration of RAVENNA AoIP and AES67 interoperability technologies into its new offerings.

Sonifex has established analogue talkback and IFB (interruptible foldback) units in its portfolio but the AVN (Audio/Video/Network) talkback-listening-paging range offers extended capability through networking and web server control capabilities. As well as including AoIP sources the new intercoms also have traditional four-wire connectivity. "The four-wire ports mean the system can take in local feeds and work with legacy products," commented Sonifex managing director Marcus Brooke at the recent BVE in London.

Brooke continued that the fibre ports also included enable the AVN to connect over longer distances. "You can connect to the mixer in a studio or another intercom system if they has AES67 capability," he said. Brooke added that the talkback units are aimed at studio and OB truck installation and meet broadcast quality requirements. They can also be used for communication between stages, theatres, offices and various zones within a facility or building complex.

The AVN range includes the TB10AR ten-button and TB20AR 20-button intercom/AoIP desktop portals. Brooke commented that it was possible to scale the system down to two or six-channels for smaller installations. Among the product features are: page button and group talk facilities, a phone key for remote dialling, a call-back button with source display, and mic/headset inputs. An integral web server is included to set-up and configure the device.

Development of the AVN series took four years. Brooke explained that while Sonifex's market was a relatively small one the move into AoIP was necessary: "Every radio station is going to be over IP or it is now. And there is a demand in TV with OB trucks and studios for two to six channel systems."