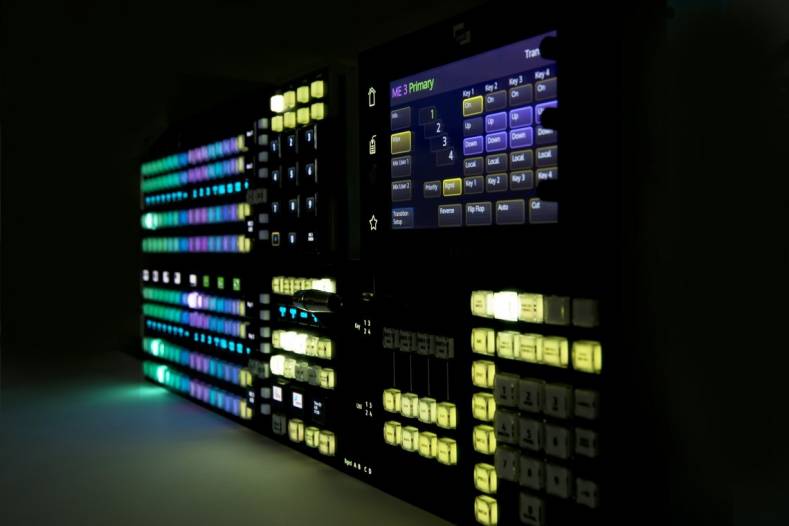 Kahuna - one of a number of SAM technologies in the new Timeline truck.

A new all-IP 4K outside broadcast vehicle from Timeline is claimed to be the most advanced in the world by incorporating among other things the first instance of IP protocol TR-03 in a truck.

The new outside broadcast vehicle, UHD2, complements Timeline’s existing 16 camera quad-SDI 4K truck but goes leaps and bounds beyond it in terms of technology.

This is a 32 camera triple expander entirely kitted out with IP in what Timeline Managing Director Daniel McDonnell calls a “brand new concept” in OB workflow.

It operates 4K UHD uncompressed over 12GigE and a massive 100Gig Ethernet switch from Arista. “You need a lot of bandwidth to route uncompressed 4K signals so you need a data centre switch. Each port can handle 100Gig – there is no SDI video matrix.”

The IP backbone is sourced from SAM (SAM also provided the bulk of kit including Sirius router for Timeline’s UHD1). This includes multiviewers, Kahuna switchers – of which there are two – and a SAM video to IP convertor converts. The only signal that does not originate as IP are out of the cameras – these are Sony 4300s. Also on board is space for 12 x IP-enabled EVS 4K XT3 servers and a Calrec 56-fader Apollo console.

The truck is the first anywhere to implement TR-03, the protocol favoured by lobbying group AIMS and devised by Video Services Forum (VSF) among others which is winding its way through the standardisation process.

It’s a step up from straight SMPTE 2022-6 because it enables the separation of audio and video for greater production flexibility. It also means Timeline can do away with huge chunks of hardware for embedding, de-embedding and audio processing.

“When the video comes into the IP world the first thing that happens is it get split into two IP streams one for video and one for audio – then each are treated totally separately. It means editorial can select, for example, different audio streams for the referee’s mic for example,” says McDonnell.

Timeline is working closely with SAM on developing a unique combination of dual vision mixers and multiviewers. This enables the creation of a 4K SDR and 4K HDR as well as down converted HD outputs - simultaneously.

“We take the output from the cameras and between them the switchers work together in synch but process a different output,” says McDonnell. “The main aim of the development with SAM is to ensure the SDR picture is not interfered with in any way.”

A pair of Grade One Sony monitors are available to view the HDR and SDR mixes.

While Timeline runs three other OB trucks, including a recently released 4K RF vehicle for smaller OB jobs, this multi-million pound investment is a serious step up for the company.

“It will be without doubt the most advanced 4K truck on the market,” he says. The truck is due on the road in May. “It gives us many advantages. One of them is that if you have a truck with a traditional large video matrix then you are immediately limiting your options. In order to expand you would have to add another matrix and when you are doing 4K you will very quickly reach your limits.

What our truck allows you to do is quickly plug in 5, or 10, or more EVS machines at a venue. Perhaps these are sited in a temporary portacabin but you wouldn’t be having to call in another 2 or 3 large OB trucks. You can do the event with one. Our switch is big enough to add hundreds of video IOs for a big show as required. In addition, since UHD2 is stripped of a lot of the bulky hardware of a conventional OB vehicle there is room for 2 or 3 production galleries for enhanced editorial.”