The compact and lightweight SEL and SE I chassis harness Thunderbolt 3 to enable data transfers up to 2,750 MB/s for both Mac and Windows computers, supporting a wide variety of high-performance PCIe cards. Differing only in size, the single-slot SEL and SE I systems are ideal for use in situations in which users only need to connect a single PCIe card. With the new interface, both systems enable users of computers equipped with 40Gbps Thunderbolt 3 (USB-C) ports, such as the new MacBook Pro, to take advantage of Thunderbolt 3's 2,750 MB/s of PCI Express bandwidth to support the most demanding, highest-performance adapter cards. 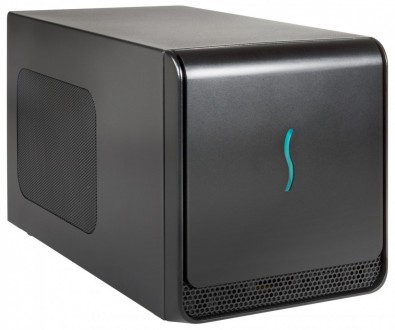 Sonnet will also unveil its new eGFX Breakaway Box, a Thunderbolt 3-to- PCI Express (PCIe) expansion solution designed specifically for bandwidth-intensive graphics applications. The eGFX Breakaway Box boosts graphics performance by giving users the ability to connect a high-performance graphics (GPU) card or other PCIe card to a Thunderbolt 3-equipped, eGFX-compatible notebook, all-in-one, or other small-form-factor computer. The box's single-port, 40Gbps Thunderbolt 3 interface enables data transfers up to 2,750 MB/s and supports popular GPU chipsets such as AMD Radeon R and RX and NVIDIA GeForce GTX. In addition to GPU cards, the Breakaway Box supports every Thunderbolt 3-compatible PCIe card regardless of length or height. The new Sonnet system is the quietest eGFX box on the market, with a built-in, variable-speed, temperature-controlled fan that quietly and effectively cools the installed card.

Sonnet will be introducing the first product in its new SF3 Series of Thunderbolt 3 pro media readers. The SF3 Series — CFast 2.0 card reader, featuring dual card slots and a 40Gbps Thunderbolt 3 interface, can ingest files from two cards at concurrent data transfer speeds up to 1,000 MB/s — more than double the average ingest speed of USB 3 card readers. The compact CFast 2.0 card reader is bus-powered with no power adapter required. Each member of the SF3 Series family will feature dual card slots, a Thunderbolt 3 interface, and a rugged aluminum enclosure designed for stacking multiple readers. At the 2017 NAB Show, Sonnet will also preview upcoming models, including an SxS reader.

Sonnet will feature its range of 10 Gigabit Ethernet (10GbE) adapters and cards, including all-new Thunderbolt 3 adapters. The company's Twin 10G and Twin 10G SFP+ for Thunderbolt 2 — and now Thunderbolt 3 — are dual-port adapters that add lightning-fast 10GbE network connectivity to any Mac or Windows computer with a Thunderbolt 2 or Thunderbolt 3 port, respectively. With the Twin 10G and Twin 10G SFP+, users can easily connect their computers via copper or optical cables to high-speed network infrastructure and storage systems using the 10GbE standard. Their performance, compact size, easy setup, and quiet operation make these Sonnet adapters suitable for use in a variety of workflows and environments.