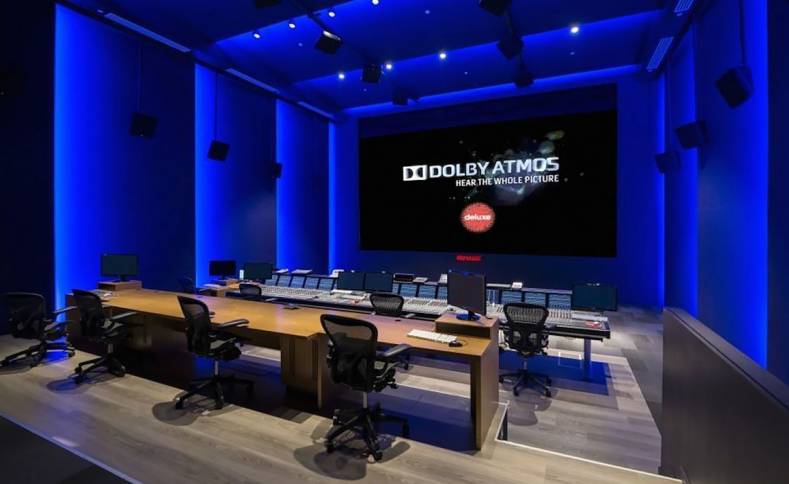 Change comes glacially slow in the audio monitoring business. The last major trend — more than a quarter century ago — came when amplifiers were placed inside the speaker cabinet. Now, says JBL, a pioneer in loudspeakers, comes a game-changer that is reinventing professional sound monitoring. 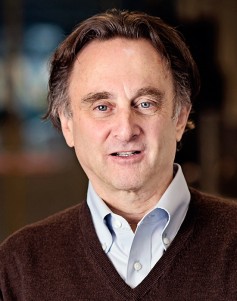 Peter Chaikin, head of recording solutions at JBL’s owner, Harman International, is evangelist for the new 7 Series speaker line, whose latest products are soon to be delivered. Chaikin’s background as a Grammy-nominated recording engineer as well as a product manager makes him one of the leading experts on speakers in the recording and broadcast markets.

Chaikin is clearly excited about the 7 Series line, which he said will redefine audio monitoring in the era immersive audio being produced in smaller control rooms and mobile trucks. In this interview with Frank Beacham of The Broadcast Bridge, Chaikin explains the technical breakthroughs in the 7 Series. 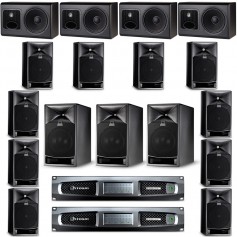 The Broadcast Bridge: Peter, you call the 7 Series a game-changer in audio monitoring. What exactly does that mean?

Peter Chaikin: I’ve tried to find another word for it because all these phrases have been overused. The 7 Series is really an application of various technologies that we pulled together to solve a problem. For the problems that it solves, it is a game-changer. There is nothing else like this on the market. It evolved from a studied approach beginning with the M2 Master Reference Monitor, which we delivered in 2013.

Some background. In the film business, there are speakers specifically designed for theater with the correct output and directivity. On the dubbing stages, there are speakers with a very high dynamic range. There are other speakers for live sound applications. But in the smaller control rooms, the market has been relegated to very compact, self-contained powered speakers that can be portable.

These speakers deliver enough output to be able to reproduce music or to create some audio for picture, but they fall short in so many areas. This small, powered form factor has become the coin of the realm. In all of the applications for loudspeakers, purpose-built design is the way the industry went. 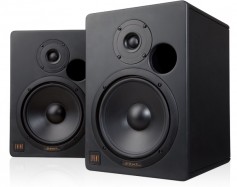 The JBL Event 20/20BAS 8-inch reference monitors were launched in 1995. They provided portable yet high-quality sound for the developing industry of smaller recording studios. Click to enlarge.

As the studio business started to migrate out of the commercial spaces into decentralized, democratized recording situations, the need for small transportable reference monitors became the thing. A speaker with a power amp built into it was the way to go. It has been that way for a long time.

The Broadcast Bridge: So what does the 7 Series do that changes this situation?

Peter Chaikin: The 7 Series is a line of speakers, both installed and powered, that deliver extraordinary output for their size, great detail and accuracy and an expansive soundstage. The monitors achieve their performance by using new driver technologies and the Image Control Waveguide originally developed for our flagship M2 Master Reference Monitor. 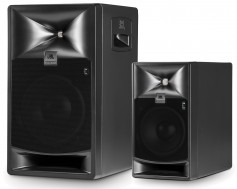 There are two models in the series. The ‘I’ series, for installed, which has been out over a year and now the new ‘P’ series, or powered versions. The ‘I’ series is a scalable modular system with all of power and amplification outboard. We have eight-channel power amplifiers that can be networked together.

The Broadcast Bridge: OK, what makes these speakers so special and different from others in the market?

Peter Chaikin: Let’s look at broadcast control rooms. We looked at the environment and noticed that people are working in all kinds of spaces. If the space is not purpose-built for audio — no matter how good the speakers —the user may be lead astray. He may be making the wrong choices. In the home environment, listeners hear something different from what the broadcaster intended. That’s due to the varying room acoustics. It’s a problem we’ve been chipping away at for 15 years. With this latest formula, we think we’ve nailed it.

There’s also the problem of sight lines in TV control rooms. There are so many monitors and their placement is not negotiable. They have to be where they have to be. As a result, the ideal location for a speaker may not be achieved. The speakers then have to be physically smaller, yet they can’t deliver less output. In fact, we need them to deliver twice the output than they did before because now they are going to used at greater distances.

When you get into immersive formats for entertainment and sports, where are you going to put all those speakers? How do you hang or mount them? In major cities, sometimes putting a power outlet near a speaker can cost more than the speaker itself! When you look at all this stuff, you realize that the right solution is boxes that are as small as possible and transducers than can deliver the output two to three more than what was previously available with greater accuracy.

This means you want to be able to go from an edit room to a production control room and to any other room and hear the same mix. Wherever you are, you want to know that the dialog is sitting in the same place and is not stepped on by the music.

This led to us to build smaller enclosures with new drivers, to solve accuracy issues and to power them with rack-mounted, eight-channel power amps with DSP. We can now have smaller boxes, run wires to the speakers and control the whole system with a piece of CAT 5 cable using a computer or a hardware controller.

The Broadcast Bridge: So, in essence, you are listening to a much smaller speaker but are hearing a far bigger sound. Can you mix and match both the powered and non-powered speakers into the same installation? 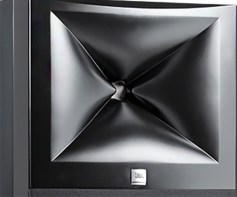 Peter Chaikin: You put your finger on it. And, yes, you can mix and match any speaker in the line. The consistency part of it comes from some heavy lifting we did in two areas. One is the waveguide. It turns out if the speaker is flat on axis, from room to room, you can hear different impressions of the mix. That’s because of the reflective sound off the surfaces of the console. That sound may not be neutral.

We use something called a image control waveguide. It is a sort of magical thing that marries the tweeter to the woofer. What happens is no matter where you are standing in the room, you pretty much hear the same thing. It also means you can go from one room to another room and play the same mix and it sounds the same.

That’s a major breakthrough. The waveguide is the ultimate expression of a neutral presentation in the room. People respond that they are hearing a much more accurate presentation of their work. They hear more detail, it’s easier to EQ, they are not feeling fatigued and they hear the same mix from room to room.

The other major development is the high frequency driver. We use a compression driver. Traditionally compression drivers have not had a great reputation. We have eliminated the harmonic distortion problems that people complain about. The compression driver gives the small speaker many, many times the output.

Intonato 24 can automatically calibrate and control up to 24 speakers for any environment or monitoring application. Click to enlarge.

The Broadcast Bridge: You also introduced another component in the system — the Intonato 24. What is that?

Peter Chaikin: You can think of the Intonato 24 as a router. It can take 24 inputs — analog or digital, or Dante with an adapter — into the box and send the signal to any or all of 24 speakers or subwoofers. It calibrates and controls all the speakers configured as stereo, surround or immersive. The automated calibration works for any speakers, regardless of brand. You plug a microphone into the back of it and you can take one or more measurements, which will be averaged. It will apply a transfer curve that will compensate for the problems in the mix environment.

Surround rooms are gearing up for immersive audio and stereo rooms are stepping up to surround. Smaller rooms are taking on final mixes. Intonato is an approach that can improve the state of monitoring in music, post and broadcast production rooms. It becomes kind of the hub of your control room and is scaleable to any size room, even a digital workstation.

The Broadcast Bridge: Who is using the 7 Series technology?

Peter Chaikin: Many of the world’s top broadcasters, post-production suites and film studios. Unfortunately, I can’t name the broadcasters, but the speakers are now being used on major global events. Deluxe Digital in Toronto built the first Dolby Atmos room using the speakers. Technicolor in Hollywood and Burbank, PostWorks and Soundtrack Group in New York, Starz Entertainment and Sony’s film studios in Los Angeles use our technology.

Interior of NEP's Denali/Yukon truck, which relies on the JBL 7 Series monitors.

NEP’s new Denali/Yukon entertainment truck uses a combination of Studer’s Vista X Audio console with 17 of our 7 Series speakers in a 5.1 configuration. (Studer is also owned by Harman.) They did the pre-show at the Golden Globe Awards. It’s a natural for trucks, because the speakers are small and light, and people can hear better than ever before.

The Broadcast Bridge: So where does the 7 Series technology go next?

Peter Chaikin: We want to expand the 7 Series monitor line further, adding more components to it. We are also looking into other areas that will allow producers and engineers to work in a broad range of spaces and outside of traditional purpose-built studios.