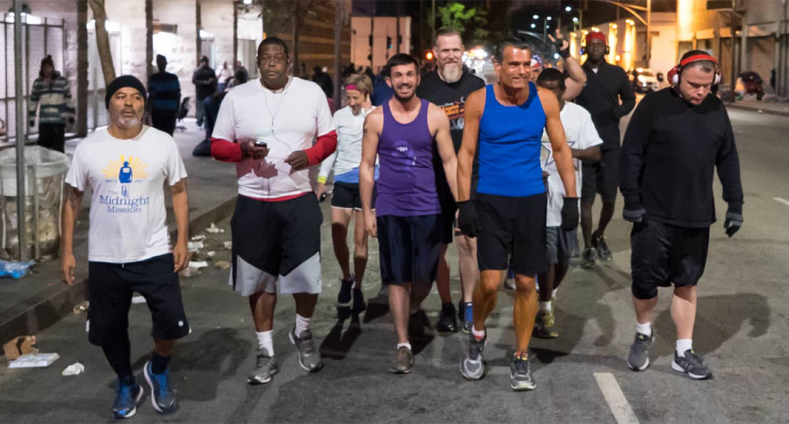 Every Monday at 6 a.m., criminal court judge Craig Mitchell leads a running group on a six mile run through the streets of downtown Los Angeles from Skid Row to Chinatown, and back. Together, he and the residents of Skid Row’s Midnight Mission Shelter make up an unorthodox running club. They train not just for the LA marathon, but to rebuild their lives.

“Any perception that people who suffer from addiction or end up on Skid Row do not possess character traits to achieve great things in their lives is an absolute misperception,” said Judge Mitchell. “[The runners have] sustained way too much disappointment, too many dreams that have not come to fruition, and I’m not going to let this experience [of the running club] fall into that category.”

That is the focus of the upcoming documentary, Skid Row Marathon, directed by Mark Hayes and produced by his wife, Gabi Hayes. Both Mark and Gabi were fascinated by the judge and his running club. They decided to tell his story.

“It intrigued me because here’s this guy that, as part of his day job and daily responsibilities, is sentencing people to long sentences and life in prison,” said Mark, who’s been documenting the runners in this passion project for three years.

“Yet, on the other hand, he’s reaching out to those same individuals to help them get back into society and be a part of the greater community. He believes in their potential.”

The film follows the runners over the course of three years as they battle with the ups and downs of addiction, and how the retreat of the club offered them a second chance.

“We’re trying to tell the story of these people as they reconnect with life, society and their own dignity. The running club has given them this second chance at life and we’re following these characters as they either succeed or fail when given this second chance,” the director said.

But Mark and Gabi faced a few challenges while filming the documentary. Since it’s based on a running club, the subjects move quickly from place to place, offering just a single opportunity to get the shot.

The Hayes team needed camera supports that were lightweight, set-up quickly and didn’t compromise on the quality of the movement. The solution was using Sachtler’s FSB 8 fluid head paired with the Speedlock tripod.

Built for camera operators on the go, the Sachtler tripod is lightweight and helps camera operators set up quickly by having a single release per leg. The FSB 8 fluid head supports the wide range of Sony and Canon cameras used on the production.

“Once the runners started their run, we can’t tell them to wait while we jump in the car to follow them, so we’d use Sachtler’s Speedlock legs every day. We’d collapse the legs, pop it in the car, put the quick release plate on, level the tripod while we were moving, and then 10 seconds later we’re shooting.

“The ability to move that around quickly and to drastically change setups was really made possible by the ease with which we could raise and lower the tripod, balance the head and then quickly start tilting and panning to follow these runners. It’s carbon fiber legs make it light and maneuverable, but strong and stable at the same time,” the director said.

Another challenge is that the homeless community doesn’t appreciate being photographed – much less recorded on video. So the director and producer ran with them every week to build up trust within the club and its members year after year.

“The story is about second chances, but as shooters know, you don’t get a second chance so you have to get the shot the first time around. Sachtler helps us get the shot so we can tell the story and capture that emotion. If we didn’t do that, no one would want to watch this documentary.