Extreme already had a wired and wireless deployment at the NRG stadium in Houston, but this year's big game marked the first time that Extreme implemented its wired and wireless solution at a stadium hosting the season's most anticipated game.

This marked the fourth Super Bowl using ExtremeAnalytics following its partnership with the NFL in 2014. Since then it has deployed its software-driven ExtremeWireless networking solution at 10 NFL stadiums to support the league's increased focus on advanced wireless standards. As a result, Extreme says in-stadium wireless usage has increased from one terabyte to 3.5 times that on game day.

As part of Extreme's wireless support, 20 certified Extreme Networks Wi-Fi coaches roamed the Super Bowl Stadium on Super Bowl Sunday assisting fans with Wi-Fi connectivity and access to the Super Bowl Game Day App. The Wi-Fi coaches worked with fans before the gates even opened to ensure the had all of the information required to access Super Bowl Stadium's network. They were also in constant communication with the stadium's Network Operations Center and continuously monitored social media for Wi-Fi connectivity alerts. This program is designed to elevate the fans' game experience and enable them to capture and share their memories on their mobile device.

The Baltimore Ravens are only in their second season with public-facing Wi-Fi, and the team's average Wi-Fi adoption percentage is 34 percent - peaking to 40 percent adoption in some games - that's over 28,000 concurrent users on the network.

In addition, fan engagement has grown “significantly” with easy access to team-developed mobile apps: in 2016 the Philadelphia Eagles Game Day App became one of the top five sports apps accessed by fans during games at Lincoln Financial Field, an increase of 4X from 2015. 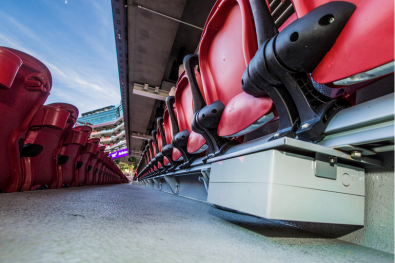 Fan usage of the NFL's Super Bowl Game Day app also skyrocketed in the last year, receiving the most hits to date at the 2016 Super Bowl. Other notable trends collected throughout NFL Stadiums include an increase in streaming content and social media apps. In 2016, Snapchat emerged as the number one bandwidth intensive app in stadiums powered by ExtremeAnalytics, followed by Facebook.

All of this data was collected, analyzed and made actionable through ExtremeAnalytics, which is currently deployed in 18 NFL stadiums. With this network visibility, the technical teams in each stadium are able to adjust their wired and wireless strategy to support and anticipate the needs of their fans.

“In 2013, the NFL implemented a new wireless standard to support the needs of fans in every stadium,” says Michelle McKenna-Doyle, CIO and SVP, The NFL. “This initiative was incredibly important to the League as fans now expect seamless connectivity and are capturing their memories and experiences through their mobile device. We are proud to have updated over 28 NFL facilities to meet this new standard, and look forward to working with our partner Extreme Networks as we continue to implement more advanced wireless capabilities." 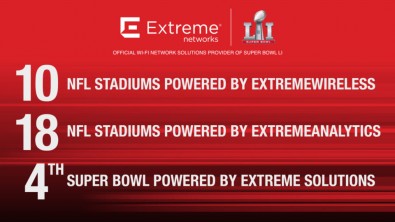 "Following Extreme's wireless implementation across ten NFL stadiums, we've seen how the network and analytics capabilities are driving the unique business goals of each team,” says Norman Rice, EVP of Global Marketing, Supply Chain and Corporate Development, Extreme Networks. “By collecting key learnings through ExtremeAnalytics, we've helped our customers leverage that data to further improve the fan experience. We're thrilled to provide our wireless at the Super Bowl for the first time and support the NFL and its fans at the biggest game of the year."

Dave Wheat, Chief Administrative Officer, Buffalo Bills says, “Offering secure, reliable Wi-Fi connectivity at New Era Field is critical to the in-stadium experience for our fans. High-density Wi-Fi is also an asset that supports and enables our organization's strategic business initiatives. This includes the integration and enablement of key fan engagement tools, which drive a more valuable, convenient, personalized experience for our fans. As a result, the [Buffalo] Bills are able to form a stronger and more meaningful connection with our fan base while supporting the overarching goals of the business."

With new challenges around every corner, broadcasters need all the help from technology they can get. In these two articles, tips to using viewer and audience data more effectively and ways to better measure a viewer’s quality of experience a…

Viewpoint:  Content Overload: Ensuring Your Programmes Stand Out Amidst the Noise

Last year, more than 400 original series hit the small screen. With no signs of slowing; predictions suggest 2017 could beat records, with over 500 programmes launched. It’s now possible for companies to make video easily accessible online and with the widespread a…

Competition in pay TV will drive rapid growth in the video analytics market to reach $3.7 billion by 2022, more than double the $1.8 billion of 2017.

The BBC Scotland opened its broadcast center at Pacific Quay in Glasgow in 2007 as an SDI HD facility with traditional satellite-based contribution downlink capability. Over the last 10 years, however, they have gradually moved to IP contribution and the benefits have…