Drones have revolutionized the way filmmakers approach aerial work today, allowing anyone to get incredible landscape shots without the need for hiring out a helicopter and pilot, which can be expensive. With a multitude of new production techniques available, however, come new challenges in the world of post production.
For colourist at Yellowmoon Scott Ferguson, delving into these challenges was an integral part of completing the grade on his latest project, Channel 4 documentary Britain at Low Tide. Exploring coastlines all over the UK, the documentary unveils the country’s most fascinating coastal archeology throughout history including Tudor era forts, Thames sailing barges, and even World War II artifacts.

With a tight turnaround of just a few days per episode, Scott Ferguson needed to complete all the final grading on the show, ensuring the multitude of 4K drone footage shot looked impressive while also fitting in seamlessly with every other sequence. Formats included everything from ProRes 422 HQ to MPEG-4, MPEG-2, and even H.264.

“I was working with a mixture of everything: there was GoPro in this, there was MPEG-4 from the Canon 5D, and even ProRes from the drone, an Inspire DJI,” Ferguson begins. “That’s the nature of a show like this one, though. You need the GoPros on a stick to poke around a sunken ship, and then you need a larger camera setup for your interview pieces. Finally, you also need to capture the breadth of the coastline with the drone shots. The challenge is making all of this feel like a cohesive piece, part of the same world despite the myriad of colour spaces involved.”

Luckily, Ferguson had his vast experience with documentary projects at Yellowmoon to draw from to help. “The main aims for me are the same whether I work on fictional tv dramas or a documentary, which is to provide both consistency and storytelling through colour,” he reveals.

“For something like Britain at Low Tide, however, we needed to ensure that the look wasn’t as stylized as a drama’s grade would be. The aesthetic needed to be more grounded in reality, and it was a fine line between making this fantastic footage look beautiful and giving as accurate a representation of the great British coastline as possible.”

Using DaVinci Resolve Studio, Ferguson began by matching all the shots from the drone with the action camera footage and interview sequences. “It’s my job to make sure that nothing pulls our audience out of the moment when they’re watching at home, which is challenging when you have footage shot from so many different sources,” he continues.

“To do this, I use a few small tricks. First, I spend a lot of time re-watching the footage to make sure that everything looks right from one shot to another. Typically, I also add a desaturation node by using a Serial Node with the Monochrome option selected under RGB Mixer to look at every shot in black and white. This allows me to observe the dynamic range more accurately, and by comparing the shadows in every shot, I know that I’m getting the contrast right. If the shadows noticeably shift in the way they appear from shot to shot, there’s something missing somewhere in the colour. It’s all about attention to detail.” 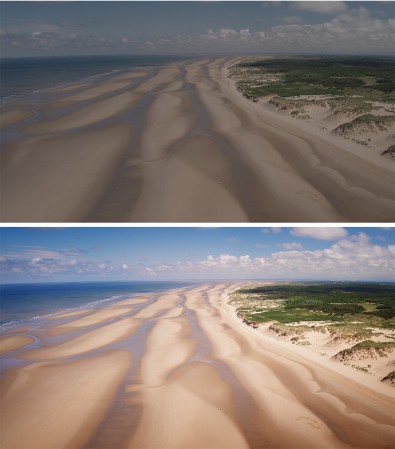 Another challenge for Ferguson came with finessing the drone’s dramatic 4K ProRes landscape shots - many of which feature in the show’s opening title sequence.

Using tools such as power windows and vignettes, he needed to highlight the historical artifacts the drone was flying past, focusing the audience’s eyes towards what was being discussed on the show. “One of the biggest problems when dealing with drone footage is the amount of fast movement involved, which can be difficult to handle in a grade,”

Ferguson adds. “A lot of the footage featured landscapes with precise characteristics and horizon lines; however, I was able to take advantage of Resolve’s tracking features to help here.”

In Resolve, Ferguson tracked elements with power windows to ensure his graded details followed the movement in every shot. “I’d just tell Resolve to track a window for a certain amount of frames, and the system would manage that using just one button, which was fantastic,” he says. “I’d be able to ensure a shot on the beach, for instance, would feature a sky that looked clear blue, with sand that was rich and warm.”

“Another advantage was that I knew I could then later go in and make small tweaks to my tracking data, without needing to re-track everything from scratch. It was hugely time saving, which was crucial in a show with as tight a turnaround as this.”

“Overall, I’m really happy with the way all of the drone shots stand out,” he concludes. “As they were all shot in ProRes, there was a good amount of detail to work with as a colourist, and being able to be nine nodes deep picking out the sand, sea, and sky, and still have Resolve playback for a client in real time was huge. They were my favourite shots in the entirety of Britain at Low Tide.”