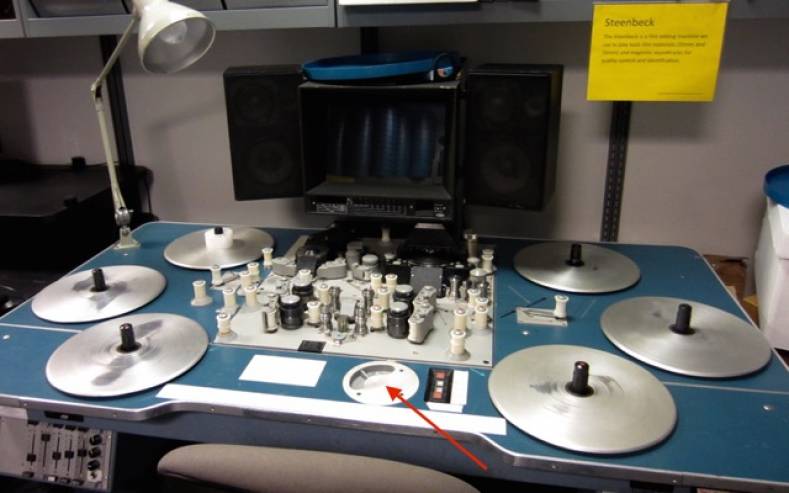 Figure 1: Steenbeck flatbed with its controller indicated by the red arrow.

In the late ‘80s as Avid developed its Media Composer another team in the UK began the development of Lightworks. Both teams realized film could be scanned and transferred, albeit with heavy compression, to a hard disk much as film negatives were copied to workprints that were edited on a KEM or Steenbeck flatbed. See Figure 1.

Media Composer and Lightworks fundamentally performed two tasks—editing (creating a sequence) and trimming. Both generated a keycode-based cut-list. The list directed “negative cutters” as they assembled the film’s negative.

Lightworks designers created an application controlled by a hardware controller that was familiar to film editors. It was a brilliant decision. First, because in the late `80s most editors had no experience with a mouse. Second, the controller made good on the claim Lightworks was conceived as a “system for editors by editors.” Figure 2 shows a picture of the original Lightworks controller.

Figure 3 shows the current controller sold by EditShare who develops and markets Lightworks.

I downloaded and installed successive Beta versions of Lightworks version 14. As recommended, I set my 15-inch MBPr’s Energy Saving settings so its NVIDIA GT-750M was always used as the GPU. (Figure 4).

Lightworks version 14 eliminates this clutter with an entirely new interface that features tabbed LOG, EDIT, VFX, and AUDIO layouts. Figures 6, 7, 8, and 9 show what is essentially a new Lightworks. According to EditShare, the new Fixed interface “… will suit those who prefer a more organized workspace and will help to ease the learning curve for newcomers.” (The shark interface, at least for now, remains available as the Flexible option.) EditShare has released an introduction video: https://youtu.be/Zucj0WaNLko. 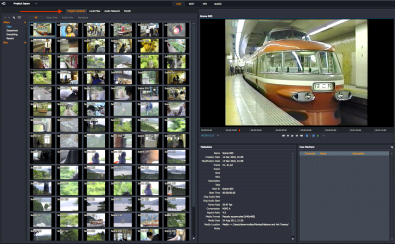 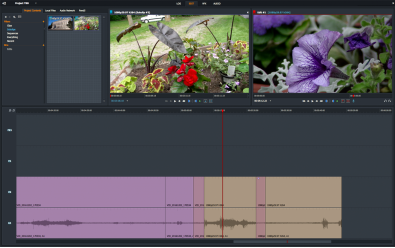 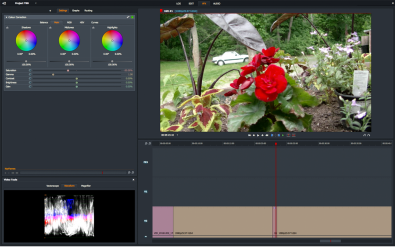 While the Lightworks’ Vectorscope panel lacks a skin-tone line and the waveform monitor has an obscured Y-axis, the new RGB Parade scope is a necessary and welcome addition. (Figure 9) 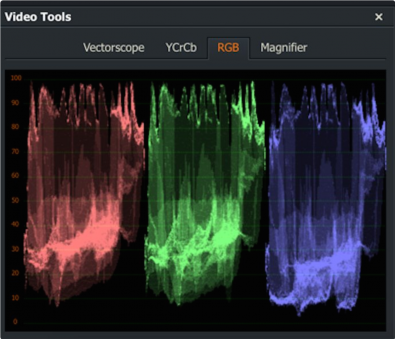 In tests, I found Lightworks clips camera input that extends to 108% to only 100%, thereby causing a significant loss of dynamic range. This issue, much like many other Lightworks idiosyncratic behaviors—such as the inability to correctly handle 720x480 video—is endemic to a product designed in late 20th Century; often to meet the unique requests by editors. Therefore, Lightworks may, or may not, be able to handle your needs.

After you launch Lightworks 14, you’ll encounter the Project Browser. (Figure 11). You can create a new project or double-click an icon representing the project you want open. 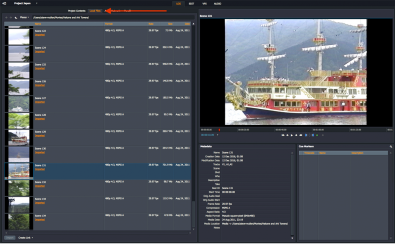 Lightworks 14 provides edit capabilities in the LOG window: clips can be played; clips can be marked; and clips can be sent directly to a timeline. Double-clicking a clip brings it into the Source viewer.

On a Mac, Lightworks will transcode SD and 1080p h.264-based media to any flavor of ProRes 422. To edit 2160p media, batch transcode it using the Jihosoft Media Converter application (www.jihosoft.com/video/video-converter-for-mac.html). Now you can import the ProRes compatible files into Lightworks.

On a PC, the Jihosoft Media Converter (www.jihosoft.com/video/video-converter.html) will transcode SD, 1080p, and 2160p h.264-based media to any flavor of ProRes 422. After conversion, Lightworks can edit the ProRes 422 compatible files.

After importing media, the Pro version supports 720p, 1080, and 2160p proxy editing. Unfortunately, all formats are downscaled by Lightworks to 426x240-pixel video. As shown by Figure 13, the low data-rate (1.18Mbps), h.264 proxy images are too small to be clear in a Viewer and become blurry when upscaled for full-screen viewing. If you prefer using the keyboard rather than clicking on-screen buttons, you’ll find the Lightworks’ default keyboard shortcuts a bit strange. For example, to Add Tracks you press delete. This motivated my creation of a mnemonic (easy-to-learn and easy-to-remember) set of keyboard shortcuts. It also re-frames Lightworks’ editing conventions to match the new Lightworks.

Prepare to Enter the Time Domain

This sentence appears in my 1994 review of Premiere 3.0: “It's time a nonlinear editing program was developed that enables editors to work rapidly and directly in the time domain.”

Each time I review an NLE I silently rant about the methods software engineers devise for editing film and video. These include: lasso one or more cut-points, enter one of several modes, select one of several edit tools, place the cursor in the lower or upper area of a track, and drag the Source viewer image to one of many icons on the Record viewer.

Perhaps I was channeling the original designers of the Lightworks system because I had seen Lightworks earlier at NAB 1993.

Film traditionally was edited on a flatbed (Figure 1) or Moviola (Figure 14), both of which inherently work in the time domain.

Figure 14: A Moviola can play film plus magnetic/optical audio media. (Click to enlarge.)

To better understand time domain editing, watch this video of using Lightworks with its controller: https://youtu.be/qenVwip1Wm4.

No Need to Enter the Domain

Lightworks can efficiently be driven by keyboard and/or mouse with minimal awareness of “film style editing” concepts. Nevertheless, Lightworks has its own ways of doing things. For example, Figure 15 shows four timeline audio additions, two of which have been trimmed without disturbing up- or down-stream audio clips. Because Lightworks doesn’t offer non-ripple trimming, you need to perform a Rolling trim at the cut-point between audio and “black.” Sliding trims can be used to adjust content within a clip.

Previous Lightworks documentation has been very sparse, but video tutorials like this one from EditShare (https://youtu.be/NEUwWORgZfE) can help you learn Lightworks.

Working with a Controller

What originally set Lightworks apart from other NLEs was a design centered on a physical controller. Curious about the value of a controller, I ordered a ShuttlePro V2 (Figure 16) from Contour Design (www.contourdesign.com/US/product/shuttlepro-v2) and programmed it to work with my keyboard shortcuts.

To efficiently utilize a controller—first assemble clips in a timeline. Often there is no need to pre-trim clips. You can now use the controller to rapidly trim the sequence. See Figure 17. Figure 17: An ideal sequence for trimming using a controller. (Click to enlarge.)

Editing is performed by six commands. Clips can be sent into a timeline using a ripple Insert (v), a non-ripple Replace (x), or a backtimed replace (b). (Three-point editing is supported.) Clips in the timeline can be split to create a new edit point (n).

Clips can be eliminated from a timeline in two ways: use “<” or “>” to jump to a cut-point or move the cursor anywhere over a clip. Then press “m” to mark both ends. Both ripple Remove (delete) and non-ripple Remove (/) are supported.

When one of these five trimming functions is initiated, Lightworks displays a yellow bracket at the edit point and opens a two-window Trim viewer. See the dashed yellow box in Figure 18. Figure 18: Trim mode has been entered. (Click to enlarge.)

Once you have selected the type of trim to be performed, watch the two-window Trim viewer and use the Record viewer’s transport controls, or the controller, to “play the trim.” Figure 18 shows a ripple-trim of the clip whose incoming edge was selected in Figure 19. To review the edit, press “r” as needed. Press "c" to close the Trim viewer. My focus on trimming should not mislead anyone into thinking Lightworks doesn’t have the capabilities typically available in a modern NLE—for example multicam editing and a tilter. Effects include a three-channel color corrector, keying, a 2D/3D DVE, a set of video filters, wipes and dissolves, audio EQ, plus EDL and Film Cut List export.

Therefore many, if not most, V14 users will need to buy a Pro license ($24.99/month or $174.99/year). The license enables uploads (up to 2160p) to Vimeo and YouTube. (Figure 20) It’s impossible to avoid comparing the monthly price of Lightworks against that of Premiere Pro CC, an obviously more powerful and established NLE, that costs only $19.95/month.

Marketing 101 would suggest that when a product has a tiny market share, that to increase the number of new customers—the ostensible rational for V14—requires an incentive. With DaVinci Resolve available at no cost, the obvious strategy for EditShare would be to make V14 available at no cost and then, beginning with V15, charge for specific functions such as RED, DPX, and CinemaDNG support, plus EDL and Film Cut List export.

Lightworks on a PC cannot export to ProRes 422. Lightworks on a Mac, however, can export SD and 1080p in any flavor of ProRes 422. Support for 2160p ProRes exports is missing. Three 2160p export formats, XAVC-I, H.264, and VP9 (WebM) are provided—although all are h.264-based. The Jihosoft Media Converter (www.jihosoft.com/video/video-converter-for-mac.html or www.jihosoft.com/video/video-converter.html) application can convert 2160p XAVC-I to any flavor of ProRes 422 compatible media. (Also check: https://windowsprores.com.)

The initial release of V14 may lack 2160p ProRes 422 transcoding and export. Hopefully, the critical 2160p support will follow quickly. It’s unclear, however, when background rendering will be implemented or whether proxy image resolution will be made proportional to source resolution. As with any major revision to an application, I expect the “V14” rollout to require many months.

My experience over several months of editing with Lightworks V14 showed it to be a very useful tool for jobs requiring rapid timeline trimming along with the addition of video/audio transitions, color-correction, plus audio level control and audio EQ. Trimming becomes even faster by adding a Jog/Shuttle controller with a button set focused on trimming.

You may want to explore other articles and tutorials written by Steve Mullen (see below).