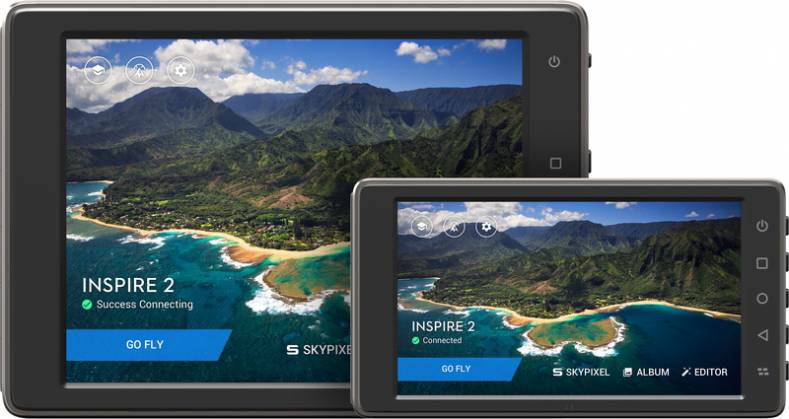 Pricing for the ChrystalSky has yet to be announced.

DJI has timed a raft of announcements for CES including a new aerial mapping app, a limited edition Phantom 4 drone and a prototype ultra-bright monitor developed specifically for outdoor aerial imaging operators.

DJI's CrystalSky monitor has a peak maximum 2000 cd/m² brightness which is claimed to be more than four times as bright as typical mobile devices. The monitor supports H.264 and H.265 video decoding, allowing it to play back files at up to 30 fps and 60 fps respectively.

The CrystalSky’s HDMI port allows up to 4K video to be output to FPV goggles and other display devices. The monitor’s storage can be extended, or footage recorded on a Micro SD Card can be played back directly on the monitor. It can also be used for footage backups. The embedded DJI GO app provides full access to all DJI GO features including aircraft parameter adjustment, camera control, footage management, and playback.

A two-cell 4920 mAh external battery gives the CrystalSky monitor a longer operating time than comparable mobile devices. It supports quick charge, and controls its discharge rate well even in low temperatures. The external battery has been designed for more extreme temperatures. CrystalSky is able to operate in as low as -4°F (-20°C) and, with its internal cooling system, functions normally in temperatures as high as 104°F (40°C).

The still in development product will come in two sizes: 7.85" and 5.5" screens, and can achieve a max operation time of 4-5 hours and 5-6 hours respectively.

Ground Station Pro (or GS Pro) is an iPad app compatible with most DJI aerial platforms and Zenmuse cameras designed to plan and control autonomous flights. Its main use is in aerial mapping, architecture, precision agriculture and electrical inspections. The 3D Map Area function allows the aircraft to generate efficient flight paths after the operator has set their required flight zone and camera parameters. The aircraft will then follow this route throughout its mission. The image data captured during these flights can be input into 3D reconstruction software to generate 3D maps, while the mission itself can be saved for re-use. A Tap and Go Waypoint feature allows for up to 99 waypoints per mission and each waypoint can have up to 15 consecutive actions, including aircraft rotation, gimbal pitch, start/stop recording, photo capture, and hover.

In celebration of Chinese New Year, DJI invited illustrator and designer Martin Sati to customize the Phantom 4. His limited edition U$1,199 design features the phoenix, a symbol of good fortune and happiness in Chinese mythology. He also drew inspiration from the four basic elements of nature – air, fire, water and earth – and reflected each of these elements in his design.

DJI’s Osmo Mobile is a stabilizer for users of the DJI GO app to track their subject automatically, create motion timelapses, take long exposures, make 9-shot panoramas, and livestream to social media. There’s a silver version which has a run time of 4 to 5 hours and costs $299.