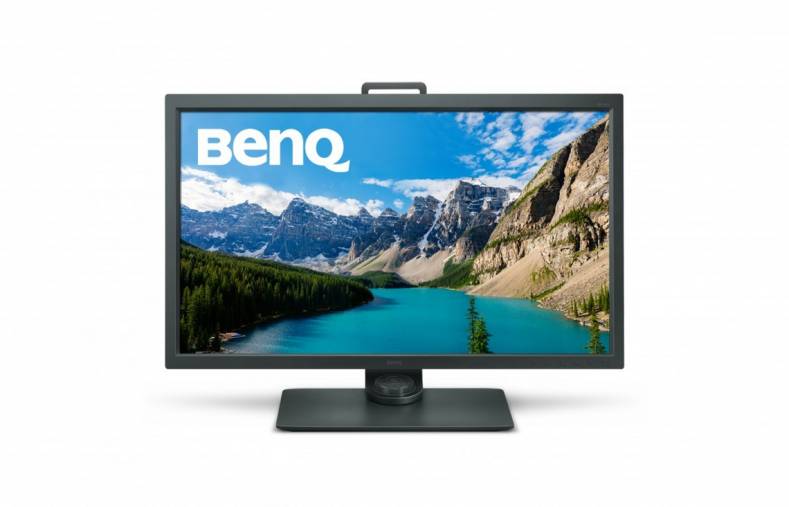 The new 31.5” SW320 HDR monitor from BenQ is a cost-effective UHD monitor for professional applications and it includes color calibration.

BenQ, a company whose name stands for “Bringing Enjoyment ‘N’ Quality to Life”, has been bringing out a series of advanced monitors which we have covered in the pages of The Broadcast Bridge, most recently their 32-inch PV3200PT “video editing” monitor.

Now they have raised the ante by adding advanced features to their new 31.5” SW320 monitor that boasts HDR (High Dynamic Range), 4K UHD resolution and 99% of the Adobe RGB color gamut among many other benefits for the professional photographer market.

Jason Lee, BenQ’s business manager told The Broadcast Bridge in an interview that “This means the monitor can be calibrated with the use of a colorimeter (for example X-Rite i1 Display Pro or Datacolor Spyder 5) to ensure the colors stay accurate,” he said. “When running a hardware calibration, the colorimeter accesses the monitor’s internal image processing chip (IC scalar) made possible by BenQ’s Palette Master Element software which is included with purchase and can be downloaded from BenQ’s official website.”

Although the is primarily designed for photographers, video shooters will appreciate that it is capable of a 100% Rec 709 color gamut, has a true 10-bit IPS back panel and can accommodate 14-Bit 3D LUT’s.

But whether for still or motion imagery, one of its handiest features is called GamutDuo.

You can see a video of how GamutDuo works here:

“The GamutDuo function enables you to simultaneously display content side-by-side in two different color spaces, such as Adobe RGB and sRGB,” Lee said. “This helps photographers to compare photographs side-by-side for quick comparison.”

And you’ve gotta love a feature called the “Hockey Puck”.

“The Hotkey Puck is a remote controller that allows for quick color mode switching, for example between Adobe RGB, sRGB, Black & White mode,” Lee explained. “The three preset buttons can also be customized to map other modes or settings, such as brightness and contrast.”

The 31.5” SW320 also supports HDR, but it should be understood that this is just the HDR-10 or ST2084 version and not Dolby Vision. That’s probably to keep costs down since Dolby Vision requires special hardware and is difficult to upgrade. 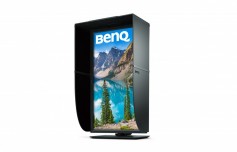 The SW320 can rotate 90 degrees, enabling viewing in portrait or landscape mode.

Also worth mentioning is the shading hood included with the SW320 that an be used in portrait as well as landscape orientation to block out ambient light from impacting the display.

The SW320 is Technicolor Color Certified, has a built-in SD card reader and USB 3 ports

One final point is that although initial specifications rated the SW320 monitor with a 96% DCI-P3 color gamut, production models proved to have only 87%. But since DCI-P3 is more of interest to digital cinema projection than professional still photographers, Adobe RGB is the main color gamut they use and the SW320 covers 99% of it.