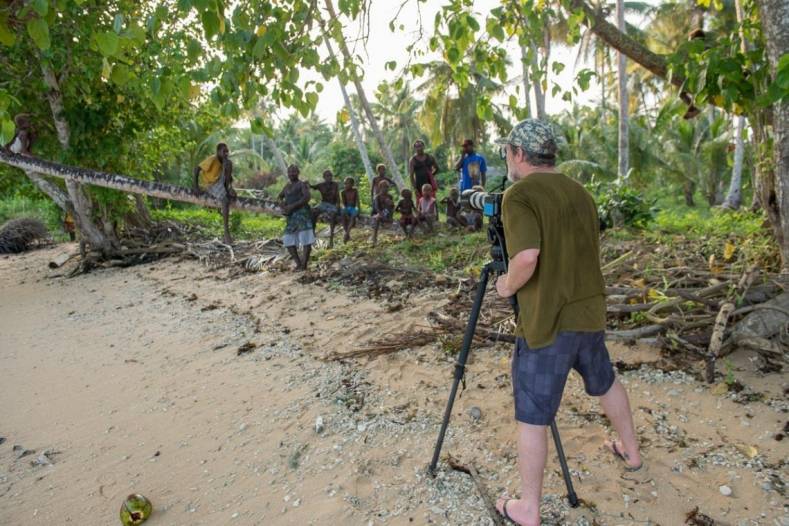 Shane Peel used the beauty of Papua New Guinea as the backdrop for his latest project, “Secret Garden.”

Amongst the beauty of Papua New Guinea, “Secret Garden” not only shares and the country’s unique culture, but also proposes the implementation of the Sustainable Surf Management plan created by Andrew Abel, a Papua New Guinea national, as a way to add value back into an area that has been over-exploited for its natural resources through adventure tourism.

Shooting with a DSLR camera and Canon lens, Peel used many long telephoto shots of various surf scenes throughout the film, so he needed a tripod that facilitated a timely setup, so no shots were missed, as well as reliably stable and smooth pans. He said the Miller Compass 12 Solo 75 Carbon Fibre tripod system proved to be ideal in all aspects.

“We spent most of our time aboard a charter boat and I knew I would need exceptional reliability from the equipment I brought, which is why I used the Compass 12 Solo 75 Carbon Fibre System,” said Peel, also director of photography and co-director, at production company My House Pictures. “Being able to pick up the system and drop a rig on the head knowing that it isn’t going to lock off or pan while going up and down the ladders of the boat or moving through the thick tropics was all the assurance I needed.”

While on location, Peel said he faced a number of challenges, including having to chase down a specific sunset shot with only minutes before the moment was gone. “Due to the fact that I could have the sticks up, head level, and a cam mounted super-fast was the most important feature. If we had been using a more complex and less reliable system, I would have definitely missed the shot.”

Miller’s Compass 12 Solo 75 Carbon Fibre System consists of the Compass 12 fluid head and the ultralight yet rigid Solo 75 2-Stage Carbon Fibre Tripod. The Compass 12 system is designed for a range of cameras, from DSLR to DV setups, and includes three selectable positions of drag, plus a zero position, and four selectable positions of counterbalance for payloads between 1.5 - 10kg. Other features include a quick release sliding camera plate with a 60mm travel, illuminated bubble level, 75mm ball leveling, three-position leg angle locks for a height range of 404 -1784mm, and spikes with wind-down rubber feet.

The seven-minute short film, “Secret Garden,” will be presented to the Papua New Guinea Ministry of Tourism and Arts, a potential producer of a full-length documentary on the topic. Once the film receives a green light, the production team is aiming to deliver the finished product in mid-2017.