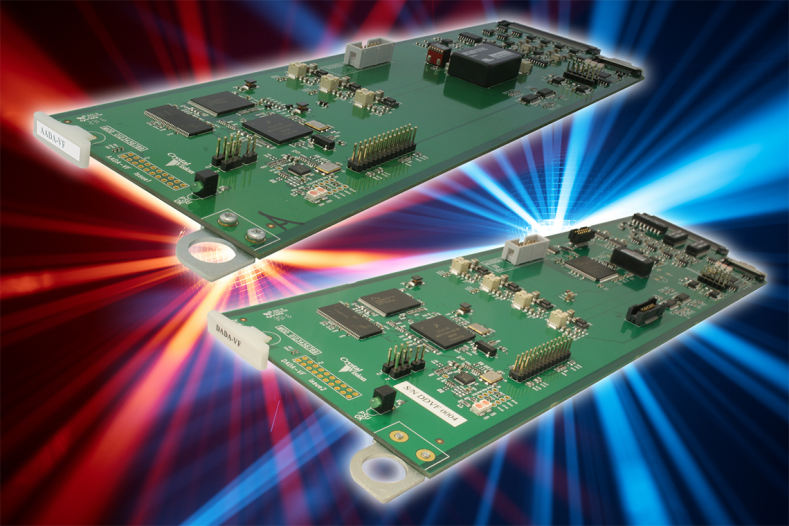 Designed for distributing AES or Word Clock reference, the DADA-VF offers the choice of dual or single channel configuration (with four outputs per channel or eight outputs), reclocking or non-reclocking, 110 ohm or 75 ohm impedance and 32kHz to 192kHz sample rates - and is the first digital audio DA from Crystal Vision to include remote control.

Designed for the robust distribution of analogue audio, the AADA-VF can be configured as either a stereo amplifier or mono amplifier (with four outputs per channel or eight outputs) and includes audio silence detection and overvoltage detection.

The DADA-VF is ideal for use in all broadcast areas where AES signals need to be distributed. The DADA-VF can be set to reclock to provide high protection and correct unstable AES inputs. Alternatively the reclocking can be switched off where the quality of the AES inputs is known or for Word Clock distribution. This flexible product includes support for 110 ohm and 75 ohm input and output impedance and sample rates of 32kHz to 192kHz.

The AADA-VF analogue audio distribution amplifier allows the flexible distribution of analogue audio in any broadcast environment. The AADA-VF features two separate audio distribution amplifiers, each with an electronically balanced input and four floating outputs which are very robust. Each output also has an individual line driver which gives excellent isolation between them. The extensive gain adjustment makes it easy to match the audio to the broadcaster's standard setting, with +/- 30dB of gain relative to the input level adjustable in 0.5dB increments.

The DADA-VF and AADA-VF both offer flexibility when it comes to configuring the outputs. The DADA-VF can be configured either as a dual channel device with two inputs and up to four outputs of each channel, or alternatively as a single channel device with one input and up to eight outputs. Similarly, the AADA-VF can either be configured as a stereo amplifier with four outputs of channel 1 and four outputs of channel 2, or as a mono amplifier with eight outputs of channel 1. To access these outputs, there is the choice of three different frame rear modules for the DADA-VF (VR19, VR20 and VR22), selected depending on the impedance used and number of outputs required. The AADA-VF is used with just one frame rear module, the VR21.

Both audio distribution amplifiers include useful troubleshooting features. The DADA-VF's audio silence detection can help alert the operator to system faults: an audio level check is performed for AES 1 and AES 2, and if the audio signal level falls below the selected level for a period of time from two to 120 seconds, then an alarm is triggered. The AADA has a number of useful monitoring tools, including an individual audio silence detector on each channel with adjustable threshold level and duration, and an overvoltage detector for each channel with adjustable threshold level.