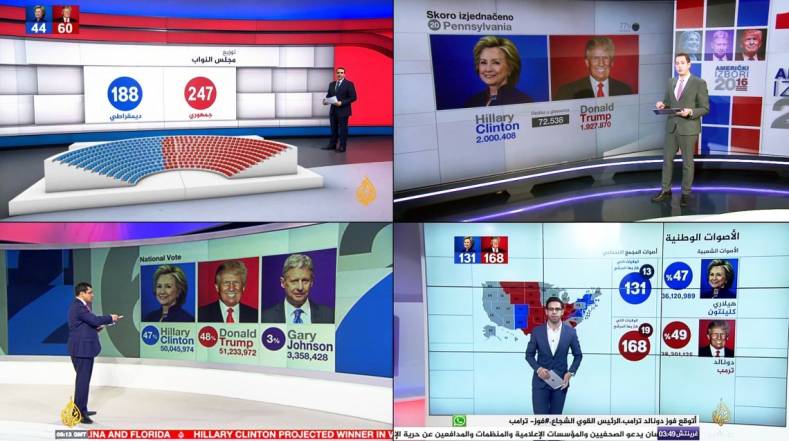 Using graphics templates provided by Vizrt, the Al Jazeera staff could automatically retrieve the election data and display it on screen.

For television graphics designers, the two biggest U.S.-based coverage events are the NFL Superbowl and the U.S. Presidential Elections. This year’s hotly contested election brought out some of the best use to date of interactive monitors, augmented reality (AR) graphs and charts, and stunning virtual sets—all used to help viewers at home better understand the election.

This year, in addition to the four major American networks, international networks like the Al Jazeera Media Network used the latest graphics technology to provide its viewers with up-to-the-second voting results. The results were visualized by an integrated data analytics and real-time graphics rendering solution from Astucemedia and Vizrt. The solution allowed Al Jazeera staff to take real-time voting data and easily turn it into compelling on-screen graphics.

François Laborie, Chief Commercial Officer at Vizrt, said the speed and flexibility of the joint real-time 3D graphics solution allowed Al Jazeera’s staff to get results to the screen faster and more efficiently.

Using graphics templates provided by Vizrt, the staff could automatically retrieve the election data and display it on the various platforms (TV, Web, mobile) that Al Jazeera supports.

The Astucemedia and Vizrt graphics solution was used for the U.S. Elections by live programs produced for Al Jazeera Arabic, Al Jazeera English, Al Jazeera Mubasher and Al Jazeera Balkans. The results were displayed in English, Arabic and Serbo-Croatian.

Al Jazeera’s Decision Desk was broadcast from the network’s headquarters in Doha, Qatar. Leveraging the speed and flexibility of the Astucemedia/Vizrt solution, special templates were set up to automatically retrieve the data and display fully rendered 3D graphics in real-time. The platform also allowed Al Jazeera to analyze the live data to make their own editorial calls on projections for the state races and published the same data to Aljazeera’s website.

In addition to the on-screen graphics and charts, the Astucemedia/Vizrt solution also drove Al Jazeera’s on-set video walls in their studios and facilitated AR graphics to represent the House and Senate races. The AR graphics were created using tracking from Motion Analysis, the Astucemedia Election Data Platform, and the Viz Virtual Studio software package from Vizrt.

Alexandre Leclerc, CEO at Astucemedia, said Al Jazeera Network’s coverage of the U.S. Presidential Election Night was “an immense success” both on the creative and technical fronts.