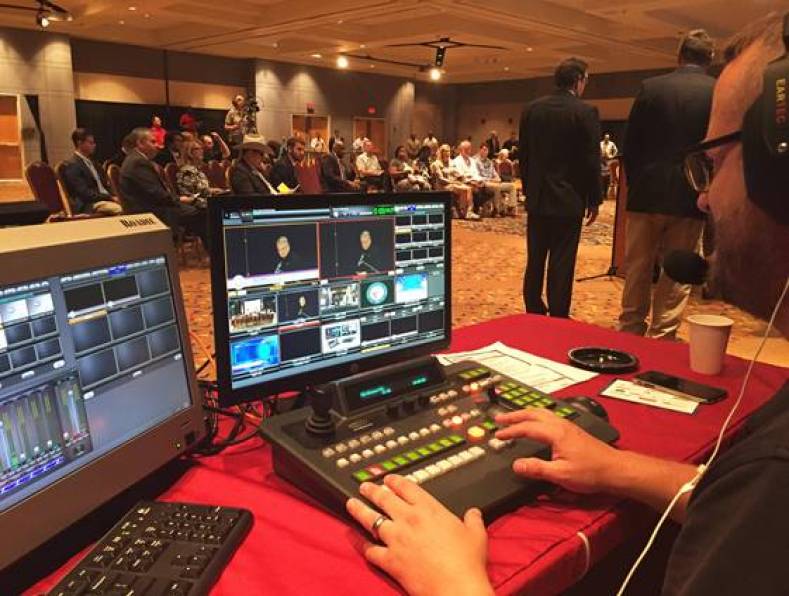 FayTV, the government access channel for the City of Fayetteville, N.C., purchased two Broadcast Pix switchers with BPNet last summer to improve its workflows and complete its HD transition.

The new Mica 1000 is used to produce government meetings from the PEG (public, education, government) channel’s temporary facilities near City Hall, while a Broadcast Pix Roadie mobile system is said to be improving remote productions.

Before the Roadie was purchased, remote shoots were a tedious process that required significant work in post before airing, explains Gavin MacRoberts, public information specialist for the City of Fayetteville and content producer for FayTV.

For example, a local candidate forum hosted by the local chamber of commerce would be covered using one camera, and graphics would be added in post. The finished program would require hours of editing, plus additional time for exporting the finished program – and multi-camera remote shoots would take even longer. As a result, programming could take days to air.

With the Roadie, FayTV can switch a multi-camera shoot and add graphics during the event, which practically eliminates post production. Using the system’s BPView multi-view, MacRoberts pairs the Roadie with a 21-inch monitor to display the preview/program and camera feeds, and uses the Roadie’s touchscreen monitor to access clips and graphics through the PixPanel.

As a result of the new workflow, this fall’s candidate forum aired later the same day on FayTV’s SD channel on Time-Warner cable, and was posted in HD on its website as well as YouTube and Facebook. “Without Roadie, it takes days to get that done,” said MacRoberts. “Now, it’s a much quicker turnaround.”

With its built-in streaming, the Roadie has also improved FayTV’s live coverage of press conferences on Facebook Live.

“Instead of shaky phone video you have a multi-camera shoot and a clean audio feed,” MacRoberts said. “For us, that was the bottom line – to produce content to connect and engage with citizens.”

MacRoberts is also looking to improve workflows by adopting the BPNet cloud-based video workflow service, which integrates with Broadcast Pix switchers. The Roadie system records .AVI files that are not supported by FayTV’s Tightrope content distribution system. With BPNet, uploaded program files are transcoded automatically for playback through the Tightrope system.

“We’re really excited to be able to implement that workflow and have an even faster turnaround,” MacRoberts added.