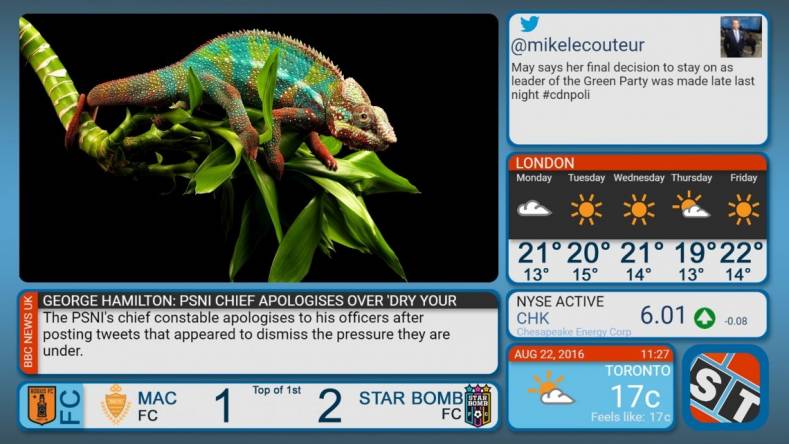 Long before this industry’s obsession with IP and the cloud, broadcasters faced a significant challenge from the digital transition: data management across the workflow. The migration to 1s and 0s created a flow of data that must be properly managed.

Graphics has proven an especially challenging area – and one that now requires a vastly different approach. Broadcasters today are as invested in the scheduling and presentation of the content as in the graphical quality.

This has gradually shifted the focus from hardware-centric systems to software-defined workflows that leverage richer data. Most graphics systems will read an RSS feed or database, however it is the relationship to data that is key to powering diverse on-air presentations.

Alongside the evolution to software-centric workflows, several open web-based technologies and standards have simplified how graphics designers and other production staff perform their tasks.

One such example is WebGL, an open API for rendering 2D and 3D graphics without plug-ins within any modern web browser, mobile device and OTT platforms such as AppleTV and Chromecast. WebGL falls under the umbrella of the open HTML5 platform, which encompasses improved JavaScript language along with richer APIs, mobile capabilities and multimedia support. The freedom associated with this evolution allows a software designer to use DirectX or OpenGL to manage 3D graphics, 2D graphics and dynamic animations within the browser. This simplifies what previously would require intensive knowledge of the latest hardware driver from a vendor like NVIDIA or ATI to make the software functional, while removing the previously required costs and complexity of specialized hardware.

Instead, vendors like Bannister Lake can now extract these APIs to the web browser, and leverage the capabilities that HTML5 and other modern web standards have established to simplify graphics rendering and display.

The graphics system allows users to aggregate and manage automated data feeds from third-party providers; and merge that data with locally created content and community-submitted information. It builds on that foundation with new graphics creation tools and hybrid playout capabilities, while also accommodating the scheduling and placement of associated data. The result is a tightly integrated graphics and data engine to serve an array of distribution channels.

Establishing and working within a Chameleon workflow is simple and intuitive. The installer takes less than five minutes to install and configure. Operators use the built-in intuitive engine to create connections to data sources.

Operators can customize the look of each output. This includes dynamic, multi-zone layouts with animations, imported images, and text with customized fonts; content can overlap or exist in one or more defined zones. The data is then pushed to the central web server and married with the graphics. 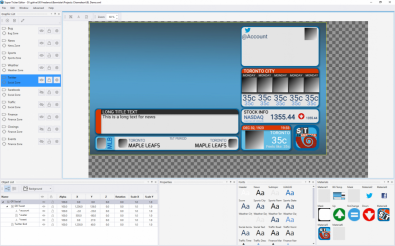 Chameleon templates are easily created and can be tightly coupled to an external database for automatic updating.

Operators subsequently receive a template to approve and submit for publishing. The built-in software player module ultimately delivers the content to consumer platforms (or a third party CG), further reducing hardware dependence around conversion and playout needs. This includes rendering of the player’s output directly, via WebGL, within HTML5 web pages.

Chameleon’s built-in intelligence ensures the information shows up as desired and on schedule. The system uses a custom-naming convention allowing operators to name objects and map content to the database. As an example, this name-mapping process between objects and the associated data enables users to decide what temperature will show up where and when.

Chameleon includes an API-based web service to support machine-to-machine interoperability over a network. The API is also IP-based so graphics and data can work together. Data moves bi-directionally between rendering and the database using the JSON format. The result is that the web service supports HTML5, NDI and CG rendering, and in the future, native SDI rendering. 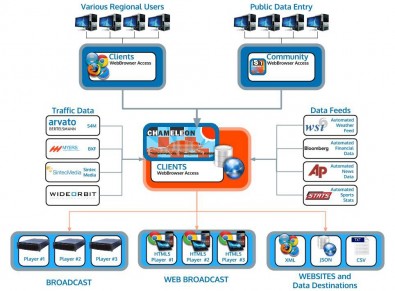 The tight coupling between the data and its sources further enhances the flexibility of content presentation. A new topic or parameters are added to a workflow through a schema, which is shared between the web service and the player. This ensures both sides – one for entering, one for consuming – can leverage the same data without third-party involvement. As new data enters the workflow, conversions for on-air or online presentation are automatically created. 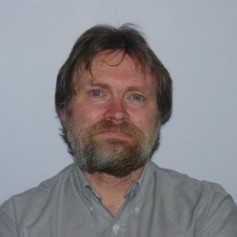 The NDI support opens new possibilities for live production workflows, and enables real-time graphics and alpha channel playout to other NDI-enabled systems. A broadcaster can push the same or targeted content to web platforms and TV sets, including those capable of receiving NDI streams.

The goal of Chameleon is to break down the traditional walls between graphics production and data aggregation – giving broadcasters and other users the freedom of where they can deliver their content.