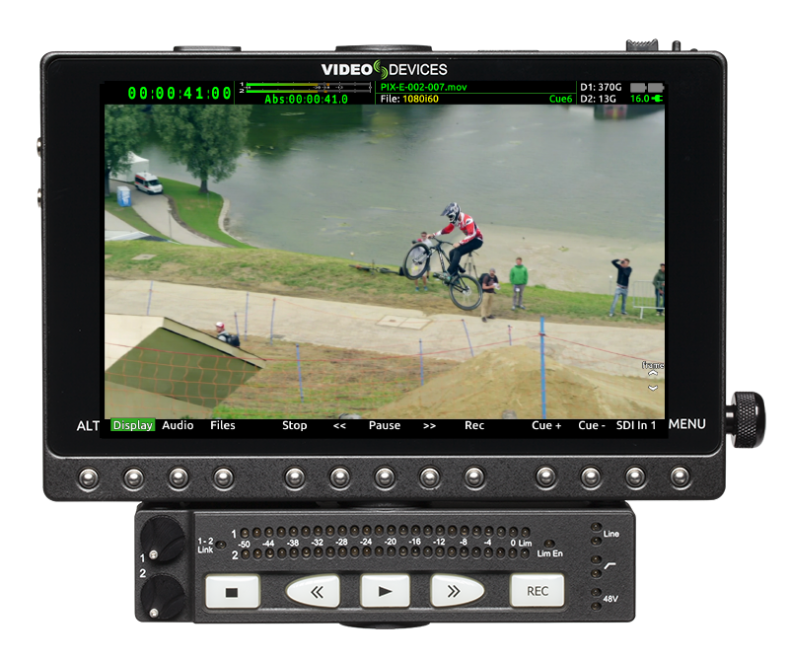 The PIX 240i was the first portable video recorder to offer a practical on-set alternative to computer-based systems.

Video Devices, a brand of video products developed by Sound Devices, has added a set of features to its PIX-E Series of 4K-compatible recording monitors with the release of Firmware Version 3.50.

This update, available as a free download for PIX-E owners, offers key playback functionality, including the ability to add, delete, and locate to cue markers, create a custom playlist, loop playback of individual recordings, regions or playlists, and more.

“We’ve talked to PIX-E users across the map who loved the video assist tools of the PIX 240i product, so we had a great roadmap for bringing this functionality to the 4K PIX-E Series,” said Paul Isaacs, Director of Product Management and Design, Sound Devices. “The PIX 240i was the first portable video recorder to offer a practical on-set alternative to computer-based systems for video assist. Now these popular tools are in our PIX-E line.”

Reviewing regions within a recorded file is by use of the new cue markers feature. Users can add cue markers both while recording and during playback. When combined with existing features such as pause and jog, users can now also set accurate cue markers and later navigate to them with a press of the Fast Forward or Rewind buttons.

Another new playback tool is looping, which lets a user loop sections of a recording, the entire recording, or even an entire playlist of recorded files. You can loop forward, in reverse, in slow motion, or at high speed.

“Time is of the essence for a video production team. This new feature-set provides users with quick and easy access to recorded takes – streamlining the scene review and selection process,” Isaacs said.

A unique PIX-E7 only feature is an SDI In button that toggles monitoring and recording between separate video signals fed to the monitor’s two SDI inputs. This is for switching back and forth between dual camera shots. “This feature is perfect for video assist and digital imaging technicians, so they can quickly compare framing and color balance on both cameras. The director can then view both shots from one device, which is extremely handy on set,” said Isaacs.

The PIX-E Series of 4K recording monitors includes two five-inch models, PIX-E5 and PIX-E5H, as well as the seven-inch PIX-E7. The PIX-E5H features HDMI I/O, while both the PIX-E5 and PIX-E7 monitors have SDI and HDMI I/O. The monitors are equipped with a full suite of precision monitoring tools, plus the ability to simultaneously record Apple ProRes files to the mSATA-based SpeedDriveand H.264 files to an SD card. With the same quality standards that have made Sound Devices a world-renowned company, its Video Devices brand of PIX-E recording monitors are built in die-cast metal housings with scratch-resistant GorillaGlass 2.