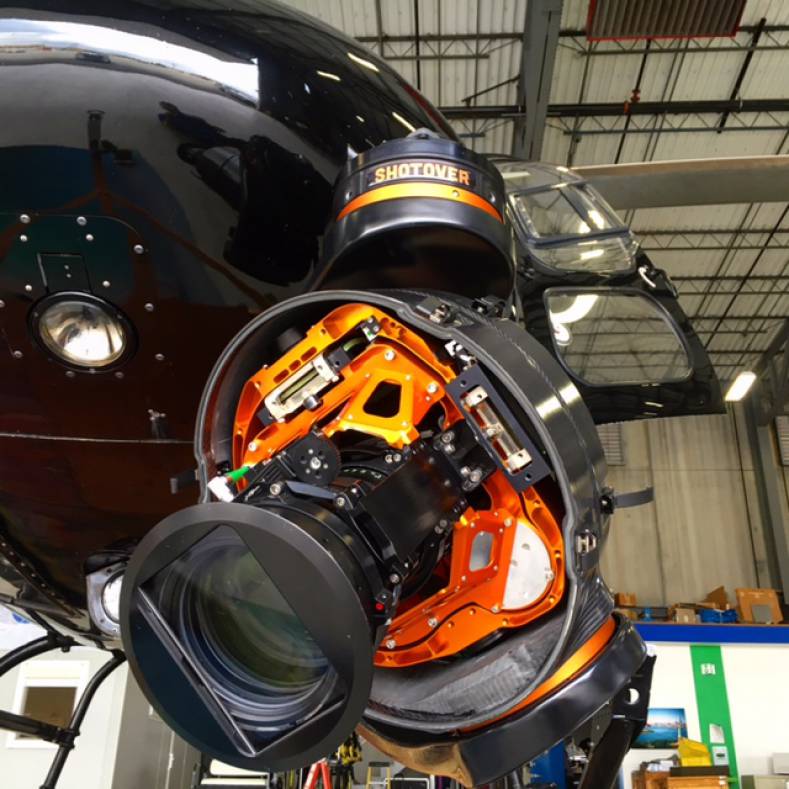 The Canon camera and telephoto lens are mounted inside a Shotover FS 1 gimbal under the helicopter.

Veteran aerial film pilot Tim Orr was recently challenged with having to capture talent talking to the camera while the camera was hovering a thousand feet above in a stabilized gimbal-equipped helicopter. The client was the BBC and the 4K aerial footage would be used for a new television series set to air in the UK called “The World’s Greatest Cities.”

The shots would have to be tight and completely stable, so that they could be easily incorporated into related ground footage without a disturbing disruption for the viewer. Oh, and add to the list of challenges that Orr had to shoot some of his footage at night, when many cameras and lenses can't handle the drastic changes in light sources, and the camera and lens complement had to fit into a Shotover F1 six-axis gyro stabilized rig mounted to the nose of the helicopter.

“We only had one type of mount, limiting what size lens we could fit in our gimbal,” Orr, who is Chief Operating Officer of Hangar95, a production company based in Kearny, NJ and subsidiary of stock footage company NYONAir.

After researching some ENG-style lenses and single sensor cameras, Orr and his team decided upon the Canon C500 4K camera and Canon CINE-SERVO 50-1000mm T5.0-8.9 ultra-telephoto zoom lens. The lens is ideal for either broadcast or cinema-style production due to its removable Digital Drive unit. The single-sensor C500 camera and 50-1,000 lens provided the right amount of dynamic range and fit perfectly into the Shotover gimbal rig. 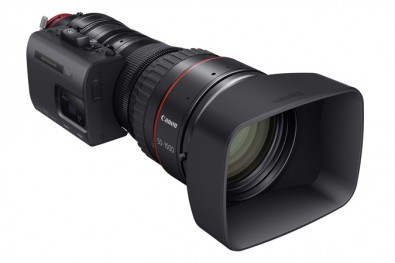 The CINE-SERVO 50-1000mm lens provides a long focal length and the highest (20x) magnification when compared to other super 35mm zoom lenses.

Available in EF- or PL- mount versions, the CINE-SERVO 50-1000mm lens provides a long focal length (75-1500mm with its built-in 1.5x extender) and highest (20x) magnification when compared to other super 35mm zoom lenses. The C500 features true 4K and QHD motion video capture as well as the ability to record raw motion video to the Motion RAW format as well as raw still video to Still RAW format.

“Other cameras with this lens would cause the gimbal snoot to stick too far out and hit the mount as it rotated,” Orr said. “We obviously couldn't have that, so we chose the combination of the Canon lens and camera, which worked perfectly with our mount.”

“The trick was being able to use the long lens at night—they typically stop out at 5—so we needed a camera that could supplement the difference in dynamic range,” he said. “That’s why we chose the C500; because that camera just rocks at night. It has a huge dynamic range and high ISO capability. According to Orr, the Canon CINE-SERVO 50-1000mm T5.0-8.9 is a big heavy lens, so there was a bit of prep work that needed to be done prior to shooting to ensure that the camera was properly balanced with the lens.

“It takes a lot of prep work to get it balanced right in the camera, but the fact that the Canon camera and lens fit together so nicely made our job easier for our ShotOver tech,” Orr said. “Capturing some of the footage was tough because the client wanted to shoot their talent on the ground (in Central Park) and they wanted to see the talent talking to the camera in the helicopter. We obviously can't get down super low to the talent, so we needed a lens that had a lot of throw. The Cine-Servo 50-10000 was the perfect choice.”

Orr’s Hangar95 completes about three dozen aerial photography projects a year, for broadcast clients as well as for other industries such as commercials, feature films and real estate.

“The client loved the footage and I was very impressed with the nighttime capabilities of the Canon C500,” Orr said. “The C500 is very compact and capable so it was a good fit for our gimbal. I definitely plan to use this combination again.”