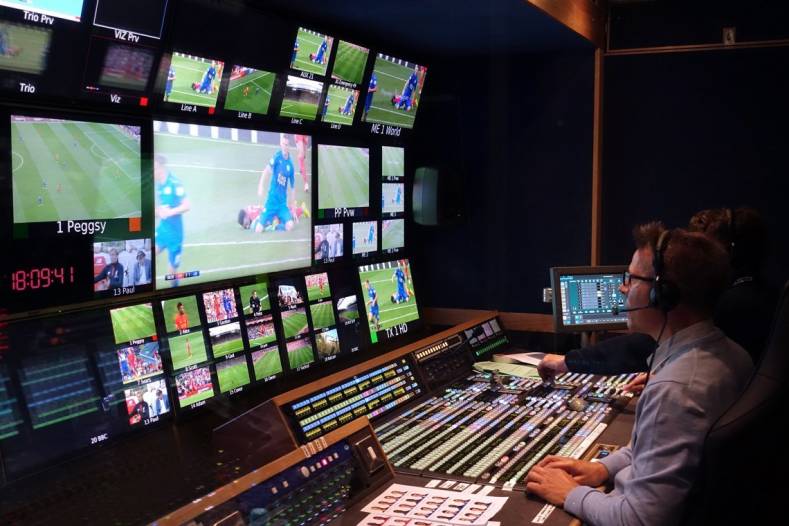 BT Sport has concluded that the demands of a live 4K/UHD signal are much more easily met with an all-IP network.

On September 10th Arena Television, one of the UK’s leading mobile production service providers, helped the BT Sport network produce a 4K broadcast (in UHD resolution) of a soccer match that was simulcast in UHD and HD over an all-IP network. The telecast, pitting Liverpool against Leicester City in a Premier League match, proved that an all-IP workflow could be used successfully for producing live television with little to no latency.

By deploying its new OBX mobile production truck (the first of three it plans to build with the same IP core design), Arena Television utilized the truck's scalable IP core and a series of broadcast-centric edge devices supplied by Grass Valley to provide the flexibility, responsiveness and reliability required for live broadcast.

“This is not our first foray into 4K/UHD, but we needed to build on our experience in season one to move to a standard workflow for season two that would allow us to deliver HD and UHD from the same truck so that all of our viewers, no matter which channel they were watching, would see the same coverage,” said Jamie Hindhaugh, COO at BT Sport. “Arena took on this challenge and they designed the solution that supported this ambition, pushing further by utilizing IP infrastructure opportunities. It’s the beginning of a new way of doing business.” By offering direct IP interfaces on all of it products, Grass Valley has made it easier to move data across the network and realize the inherent benefits of IP while delivering on the demands of live production.

“We talked to the usual technology partners that OB firms tend to use and it became apparent that only one company was thinking outside the box in how to move technology forward,” said Richard Yeowart, Arena’s managing director. “The demands of a 4K/UHD signal are much more easily met with an all-IP network, so the emerging 4K/UHD and IP technologies from Grass Valley were an obvious fit for us. What we have now is the most powerful OB solution which provides greater flexibility going forward, is future-proofed and better able to one day roll out HDR and higher frame rates as and when they are required.”

By offering direct IP interfaces on all of these products, Yeowart said that Grass Valley makes it easier to move the data across the network and realize the inherent benefits of IP while delivering on the demands of live production. The LDX 86Series camera offers the ability to capture native 4K and native 3G/HD simultaneously, using TICO compression to deliver a signal across a single wire and reduce the physical cabling requirements. Arena Television’s OBX is completely signal-agnostic, offering the ability to switch easily between UHD 2160p50, 3G 1080p50 and HD 1080i50, while using less cable for a total weight that is lower than an equivalent SDI installation.

“For us, the biggest advantage was the seamless workflow,” Hindhaugh said. “We didn’t have to do anything different on our end to reap the benefits of the 4K/UHD and IP technology. This is clearly the right direction for the industry, making it possible for us to provide both HD and 4K/UHD content in parallel for our viewers so they can choose what’s right for them at the time.”

According to all involved, the live IP broadcast was extremely successful. Arena said more all-IP and 4K/UHD projects are on the immediate horizon for the OBX mobile production truck. When its OBY and OBZ OB vans hit the road in the coming months, Arena will be even better equipped to maximize the latest technology and provide its clients with more live production flexibility than ever before.