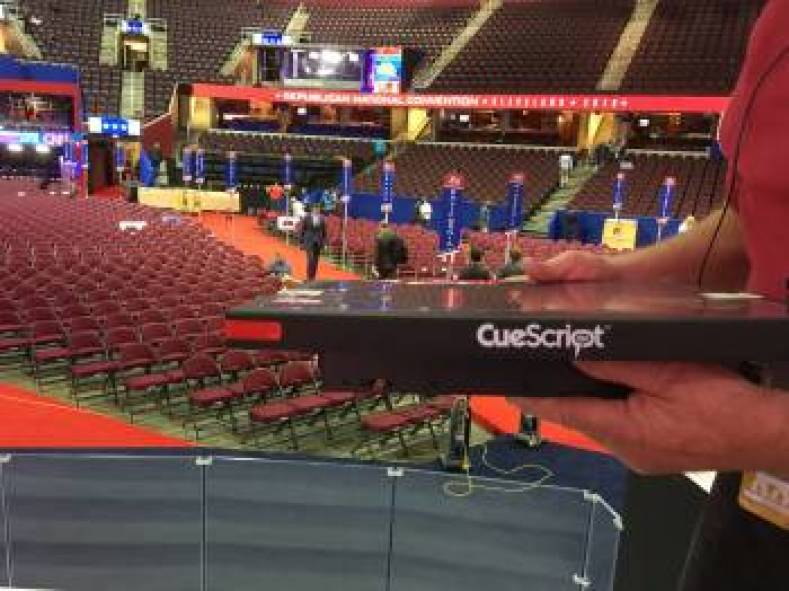 Even Donald Trump himself had high praise for the CueScript prompting systems.

Although some might think otherwise, presidential hopeful Donald Trump likes to use a Teleprompter for major speeches, such as the one he gave at the Republican National Convention (RNC) in Cleveland in July. In fact, Trump travels with his own prompter operator that he’s been using since the Republican primaries.

There was a concern during the RNC convention that the bright lights of the Quicken Loans Arena might cause a problem for Trump while reading the Teleprompter, but when his prompter operator saw the clarity and brightness of the CueScript CSM19 19-inch LED prompters, his fears were quickly allayed.

“We knew that CueScript’s high brightness LED prompters could give us exactly what we needed,” said John Maffe, Owner and Vice President of Vision Prompt, a full service prompting company in Calabasas, CA. “We rented six CSM19 19-inch Teleprompter monitors, each of which outputs 1,500 nits [by comparison, a typical PC monitor outputs 350-425 nits].”

Vision Prompt was contracted to handle the main stage prompting duties for the speakers at the Quicken Loans Arena. In such a bright venue, where even a presenter with fair eyesight couldn’t clearly see the big 80-inch prompter in the back of the house, Maffe said he knew they needed a really crisp and bright prompter system for the main stage.

The CSM19 is the largest of the CueScript monitor range and is ideal for use with robotic camera pedestals, box lenses and when the talent is located some distance away from the camera. Features include an integrated mounting system, low power consumption, 3-mode power start up, a user adjustable LED control panel and LED wrap-around cue lights. 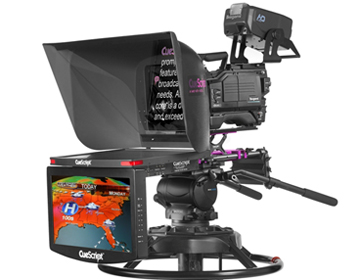 The CSM19 is the largest of the CueScript monitor range and features low power consumption, a user adjustable LED control panel and LED wrap-around cue lights.

Inside Quicken Loans Arena, Vision Prompt set up monitors in four rehearsal rooms, plus one more each for Trump and his running mate Mike Pence at their hotel.

“As these were in more controlled situations, we told all the presenters, including the Trumps, that if they could see the monitors in the rehearsals, then they would have no problem seeing the monitors on the robotic stands on the main stage,” Maffe said. “It’s unbelievable that we had no problems at all. If you know prompting, then you know that this is very unusual for a project of this size.”

During rehearsals, everyone was pleased with how easy to read and how bright the CueScript monitors were. Even Trump himself.

“I think this is so perfect,” said Trump, while pointing to the prompter’s reflective glass. “I’ll be honest with you, I love the look of this.”

However, on the day of the Trumps’ speeches (his daughter Ivanka introduced her father at the convention), Maffe said they were faced with a new logistical challenge. Donald Trump wanted his own special podium and stage look, which would be swapped during a video presentation before Ivanka would introduce him on the main stage in Quicken Loans Arena.

“A robotic system placed under the stage seven feet below the platform riser would lower the previous speaker’s prompter system and the Trumps’ prompters would rise up,” Maffe said. “This meant that a crew would be under the stage and would have to unplug one set of prompters and plug in the Trumps’ prompters. During this time, we were blind as to what the prompters were actually showing, but we knew that the CueScript prompters would work. They rose up on national television as planned and worked perfectly.”