IP is the enabling technology for this revolution, not the reason for it.

Television stations are traditionally rigid, inflexible designs catering for peak transients and worst case scenarios. Flexibility is extremely expensive in SDI. A news operation may only use twenty percent of its resource eighty percent of the time, but when a big news story breaks it’s all hands on deck and the remaining eighty percent can be consumed easily.

SDI routers form the core of a TV station with thousands of point to point inputs and outputs. Resilience involves the added expense of buying a second SDI router and either using distribution amplifiers to copy each feed, or providing some sort of vendor specific trunk routing between them.

TV stations do not scale easily. Events such as the Olympics happen every four years and this needs to be catered for at the start of the design. In the life cycle of a station the expensive extra capacity may only be used for five or six months in total.

Broadcast engineers are highly specialized members of the team who have a deep knowledge of their discipline. Unfortunately, they are becoming a rare breed and there are fewer and fewer engineers who truly understand SDI systems.

Regardless of the industry they work in, business managers of mature industries want systems that are highly flexible, cost predictable, resilient and scalable. From a business owners point of view, having to invest in specialist broadcast hardware with all of the costs that are needed to support it is unwelcome and directly affects the productivity of the creative production teams.

Ethernet has been in industry for over forty years, with IP not much behind it. The reliability and resilience of the technology is understood and has stood the test of time. Speeds keep increasing with 25GBASE-T over CAT8 twisted pair cable providing 25Gb/s. And if the cable run is too long then fiber optic could be used instead, further decreasing the physical space taken by the cables.

Six uncompressed 1080p60 (3GB/s) signals with non-blocking switching could travel along a CAT8 25GBASE-T cable. Even better, twisted pair Ethernet cable is bi-directional so can send signals backwards and forwards on one connector, further reducing the cable needed. 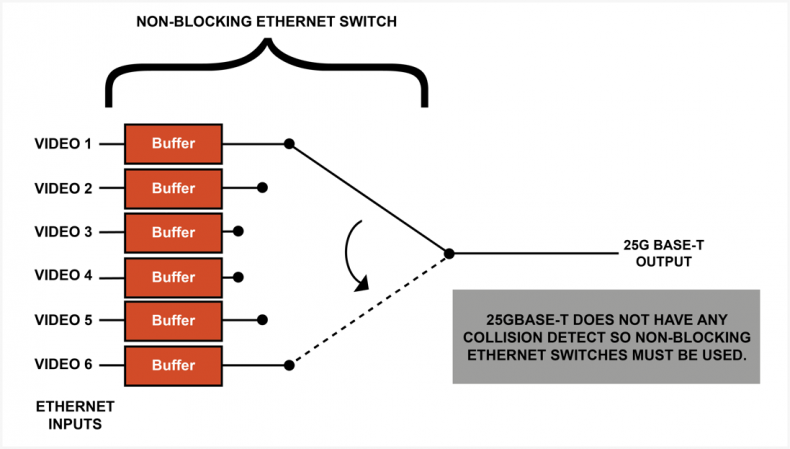 With each 1080p60 source generating 125,000 UDP packets a second the argument for using COTs routers starts to disappear, datacenter grade core switches are needed with 25Gb, 40Gb and even 100Gb interfaces. In reality the network router costs may be as much as an SDI router, but the key to understanding the revolution is not to think about short term savings of hardware, but to think like a business owner of a mature industry and consider the flexibility, agility and predictive costs of an IP network, giving production teams the flexibility needed to improve the viewing experience.

However, the cost of IT equipment is only ever going to decrease as IT sector market forces keep downwards pressure on the price. Broadcasting is a small industry compared to the IT sector but can ride on the back of their savings and technology gains.

Resilience is readily available in IT networking and forms the backbone of its infrastructure. Instead of using centralized SDI routers IT provides distributed routers with high speed fiber trunks connecting them. Studios, graphic areas and edit suites can be treated as data islands with their own routers, meshed in a network with distributed points of failure instead of relying on one SDI router in a control room.

Ethernet and IP infrastructures are scalable by default, and their decentralized hardware philosophy means we no longer have to plan years ahead for SDI router space, power and air conditioning.

As well as infrastructure gains, operational benefits soon start to emerge with virtualization of functions. Applications abstract away from the underlying hardware to provide both resilience and flexibility. Typically, four hardware servers could provide ten edit systems. New instances in public clouds such as Azure and AWS are spun up when demand becomes higher than expected, especially as cloud data bandwidth continues to reduce in cost and becomes commoditized. 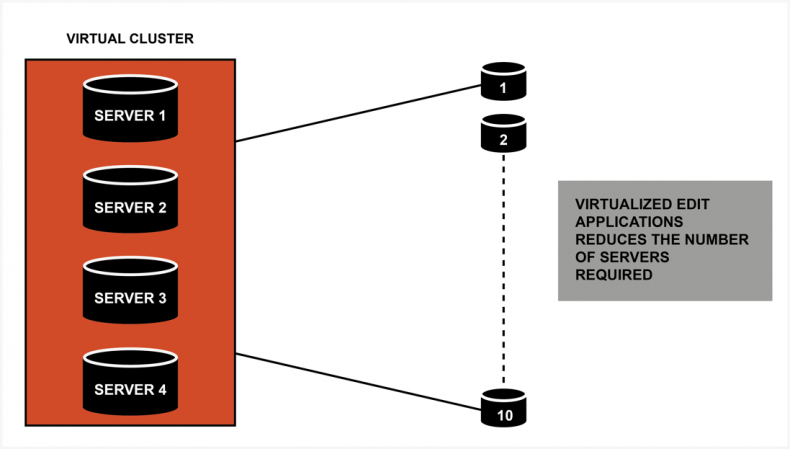 Virtualization makes much more efficient use of hardware

Back hauling outside broadcast camera and microphone feeds becomes possible as only camera and sound assist crews need to be sent to the event with a small technical support team. Each camera and microphone will have its own IP connection straight back to the studio anywhere in the world. Travel, hotel, overtime and subsistence costs tumble as the majority of production teams and studio crews stay back at the base studio.

Skillsets will change as broadcast engineers need to understand Ethernet and IP networks. Instead of being vendor specific product specialists, IT engineers will need to understand timing constraints of video and audio, and software defined networking. Modern software development has a concept of DevOps role, a person who understands the core infrastructure as well as the detailed functions of the applications, this may be how broadcast engineering will evolve.

Technological advances of IP start with the business case, and this time it’s not about saving money in the short term but providing predictable costs, agility and scalability to meet the increasing transient demands of the business. Mature industries such as manufacturing and banking already prove the business case for this philosophy.

The technology will catch up to meet the needs of the business owners, but the real winners will be those who understand, embrace and deliver this new broadcast industry business paradigm.