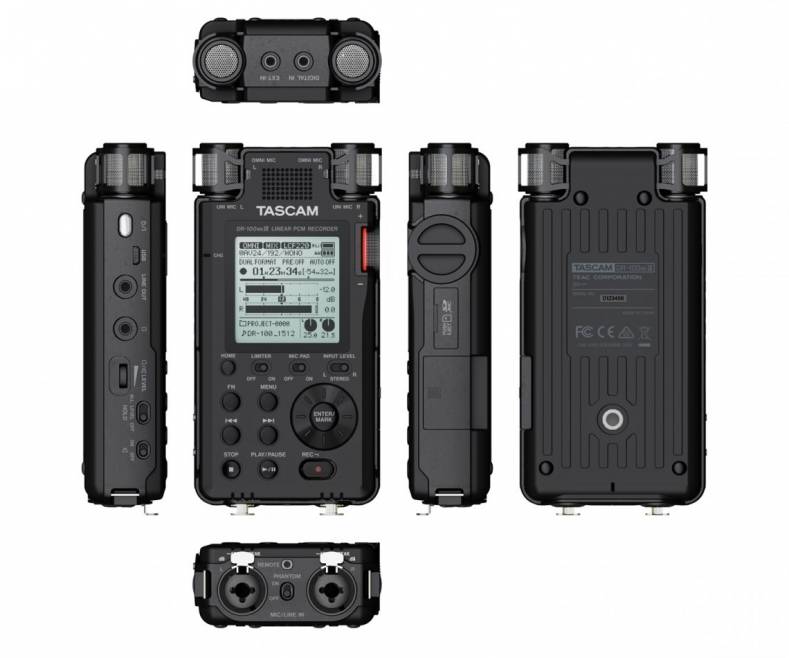 Tascam’s new DR-100mkIII may be the best portable audio recorder design to come along since the category began over a decade ago.

It has been over a decade since Sony shook up portable audio recording with the introduction of its portable PCM-D1 digital recorder. It was absurdly expensive, built like a tank and had software that was flawless from day one. I bought one immediately and it forever changed my daily routine of recording journalistic interviews and events.

Over the years, I have used dozens of flash-based digital audio recorders from a range of manufacturers. I always sought that perfect blend of features, ruggedness and reliable software, finding most models deficient in some way.

I stayed with Sony recorders for a long time because they are reliable and sound great. But Sony continues to have the annoying habit of not putting XLR connectors on their recorders, something I find a deal-breaker these days. Otherwise, Sony makes wonderful machines.

In recent times, I have alternated mostly between Zoom and Tascam recorders. Both companies make excellent products. I still own both a Zoom F8 and H2n and they function well for their purposes. Now, I have added a new recorder to my arsenal and I can say without a doubt it is the best portable audio recorder I have ever owned. It’s the new third generation Tascam DR-100mkIII. 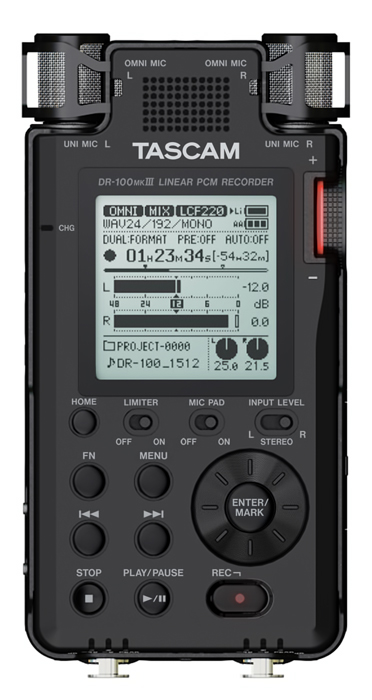 To be honest, over the years I have been hot and cold on Tascam products. Some of their recorders have very tiny screens and hard-to-read user menus. Some have cheap, easy-to-break lids on their battery compartments. Tascam manuals are usually poorly written and miss a lot of important information — leaving the user to figure it out. And Tascam has one of the worst warranty policies in the audio industry.

That said, the company hit a home run with the latest version of the DR-100, its top of the line portable. This machine is compact, has a giant clear screen, excellent mic pre-amps and every feature one could ever desire in a portable recorder. I searched for missing features, or “gotchas,” and could find none.

My first reaction was I liked the large LCD screen with a user interface that maximizes visual confirmation. The screen is double the size of the previous DR-100 model. There is no tiny, hard to see text. It has dedicated status LEDs for features like record levels and clear legends on the case. Finally, someone at Tascam was thinking and got it right.

The new machine, built on a rugged aluminum body, records at both 192kHz/24-bit and 192kHz/24 resolution and has a very high 109dB S/N ratio. It has temperature-compensated clocking and dual-mono AKM AK4558 converters that combine with the company’s high-quality HDDA microphone preamps. By eliminating interference between the left and right channels, Tascam says the signal-to-noise ratio is maximized and audio fidelity is dramatically improved.

My tests confirm Tascam’s claims. This machine records killer audio — the best I have ever heard from a portable recorder. Not only does it sound great, but it is an ergonomic dream to operate. 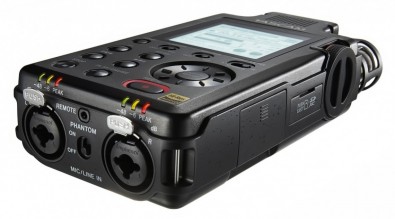 The recorder has dual stereo mics in both AB and omnidirectional patterns, two XLR/combo jacks, switchable phantom power and a dedicated input level control. The integrated shock mount housings for the directional mics are well-protected, very compact and function very nicely. The omni mics can handle 125db sound level, which can record just about anything — no matter how loud.

The recorder uses dual battery technology that includes both a built-in Li-ion rechargeable battery as well as two hot-swappable AA batteries. This allows users to keep on recording indefinitely. The batteries can also be rapidly charged either by plugging in an AC adapter or using USB Bus power from an external battery pack used to charge mobile phones and tablets.

The new recorder also extends the use of SD flash cards, now allowing SDXC cards in sizes up to 128GB. With this much storage for audio, the recordist will become bleary-eyed before that card runs out.

An XRI function for extended recording information keeps track of all recording settings as part of the file. This features allows the user to double-check the details of the original recording for logging or replication of recording conditions at a later date. Information includes date and time of recording, input sources selection and levels, ADC mode on/off status and other data. The XRI information is stored as part of the BWF data block.

For such a compact recorder, the Tascam DR-100mkIII ($399) is loaded with features, including inputs and outputs for virtually any device you can throw at it. Yet, with all its flexibility, the recorder is intuitive and very easy to operate. Essential information is also clearly visible during operation. All this may sound obvious, but many manufacturers have missed the mark with these features over the years.

After a decade of experience with portable recorders, Tascam has finally created a recorder that blends the right technology with the right features. It is perhaps as close to being perfect as an audio recorder this size can be.